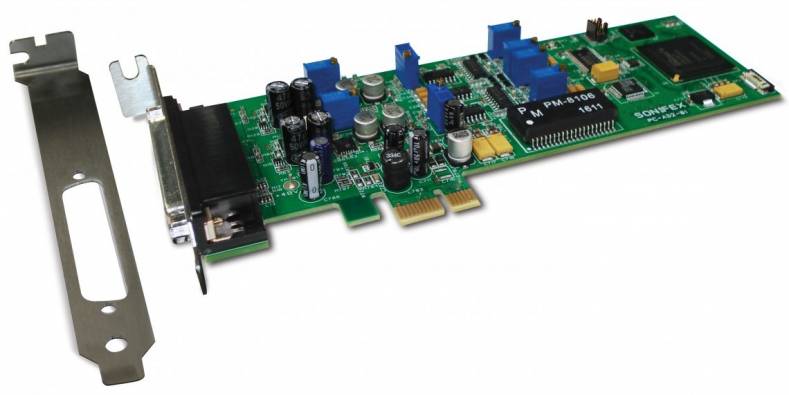 Sonifex will be displaying new products at IBC this year, featuring the new range of AoIP products and the new PC-AD2 PCle Half Height Sound Card.

The new range of Sonifex AVN (Audio/Video/Network) talkback/listening/paging intercoms aid communication between studios, stages, theatres, offices and different areas in a facility or building complex. RAVENNA (of which AES67 is a subset) allows for the distribution of audio across a network.

The AVN range use RAVENNA as the communication method providing compatibility with other AES67 systems and allowing simple CAT 5 cabling and expansion.

The AVN-TB products are IP audio based talkback intercom units with an advanced feature set, allowing them to be used in multiple applications. With both 4-wire analogue inputs and outputs, as well as AoIP network audio connectivity, the AVN-TB units can be used with existing legacy 4-wire systems and with new AES67 AoIP networked audio infrastructure. Additionally, all audio is at 48kHz sample rate, meaning that it’s broadcast quality audio as standard. With dual 1Gb lan ports and a 1Gb SFP fibre port the products can be used in larger networks.

The first intercom to be released is the AVN-TB10AR, a 10 button intercom meaning that 10 other ‘stations’ can be defined, one per button, for communication. Comms can be made as a Talk action, a Listen action or a duplex Talk/Listen action to/from each station. Coloured LEDs in the buttons help to show which action is being used and there is also a Callback button for when you’re unavailable to receive a call.

Each unit has a built-in webserver which is where the majority of settings and configurations are made. The front panel OLED display can also be used to configure the unit, although more functionality is available by using the webserver. The webserver is a responsive design meaning that it can be used with small screens on smartphones and tablets.

The unit has a front panel power button and dual power connectors - an IEC mains input and a 12V DC input, which allows the AVN-TB10AR to be used for both studio and mobile installations. Also, a secondary power source reduces the effect of power down events. In any case, the unit monitors the status of both power sources and displays this on the front panel.

Also to be shown at IBC is the AVN-GMCS, which was announced at the end of last year, is a PTP GPS receiver and grandmaster clock used for synchronising AoIP audio networks, such as those used by RAVENNA and AES67.

IEEE1588-2008 PTPv2 (precision time protocol) is used to synchronise all the nodes within a network. To achieve this one of the nodes must become the master clock and distribute time packets to the others. The AVN-GMCS is designed to perform this role simply and accurately, enabling sub micro second synchronisation between all nodes.

This year, trials have been performed by other manufacturers using the unit to sync their AoIP networks to ensure compatibility and now that these have been successful, the product has been released. Some new features that have been added into the latest hardware include: