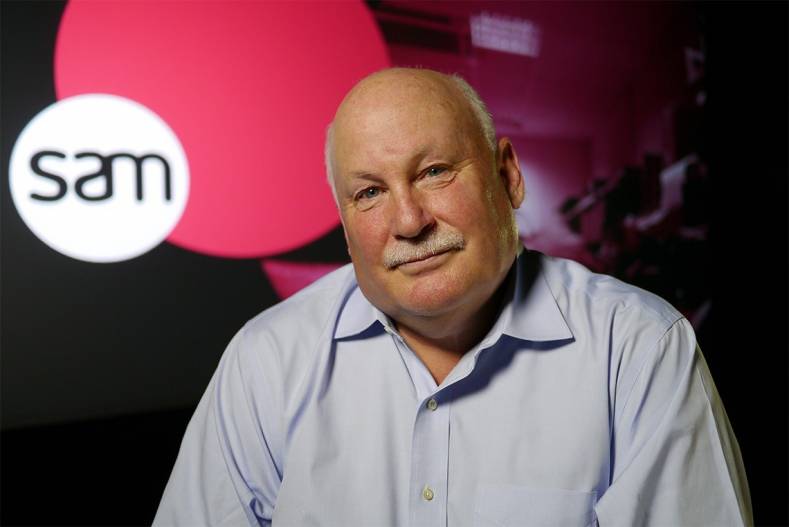 "I am anticipating the best IBC ever." Tim Thorsteinson.

​Tim Thorsteinson has now fully settled in as CEO of Snell Advanced Media (SAM). The Broadcast Bridge visited the SAM HQ in Newbury, UK, at the old Quantel site just prior to IBC to hear how the combined companies were moving forward.

Putting two companies together is never easy, so how is it progressing?

“We are 75% of the way there,” said Thorsteinson, citing as an example  how SAM has integrated Snell’s Momentum asset management with Quantel’s Enterprise SQ newsroom servers. Mission, the management partner for SQ,  adds file and video-based ingest, capture of external metadata files, a sophisticated search tool and direct integration with archive solutions.

Broadcast Bridge Looking back over the history of Quantel it was know for a strong presence in post production. Many a Hollywood post house made a good living of the back of Harry and Henry. Those day so long gone so where now?

“We sell a lot of post into broadcast” said Thorsteinson. The Quantel Rio editor is at the core of their editing products. The editor utilizes FrameMagic, with its copy-free workflow. No new media is created when edits are made except for any changed frames (dissolves etc); edits simply comprise a new set of instructions for the order in which the frames are played out on a timeline. This means that the moment editing is completed, the finished piece is ready for playout. For fast-turnaround editing like news or sports this can gain precious seconds.

Broadcast Bridge SAM has some large homegrown competitors in the key N American market, so what’s it like being a UK company in that marketplace?

For a European company selling into the U.S. market, support is key, said Thorsteinson. “The aim is to become self-sufficient in N. America and Latin America. Our main customer base (in the U.S) is traditional broadcasters.” As an example, Latin America was served from Spain, and is now served out SAM offices in Florida, Mexico and Brazil. He also hinted at the possibility of a second R&D base in the U.S.

Broadcast Bridge Everyone is talking about IP, but what is the real benefit to a broadcaster?

Thorstein immediately replied: “The primary benefit of IP is flexibility. It can even outweigh an increased cost. You can spin-up and spin-down facilities quickly.”

Although major sporting events are a typical example, more common is provisioning episodic production that is commissioned season-by-season. IP allows virtualized resources to be called on tap to such cyclical productions. This could be from the Cloud, both applications and storage as a service. When asked if this was a possibile future direction for SAM, “We won’t be a service provider in my time You need scale, like AWS and Google,” said a definite Thorsteinson. “The challenge is the commercial model, not the technology. We don't want to compete with our customers.”

Thorsteinson indicated that traditional modular products were only a small piece of their business now, and the shift in technologies was no different from moving to commodity storage arrays as has Quantel, and other companies like Avid. “The trend is to commoditised hardware.” (Quantel has also been moving from bespoke processing to GPU accelerated software).

This shift to commodity products challenges sales volumes for hardware and price points have been falling. Thorsteinson pointed out that “It has always been brutally competitive.”

Robert Szabo-Rowe, general manager of SAM’s live production & infrastructure division explained how the move from 10GbE to 25 and 40 GbE have opened the way for IP especially for uncompressed 4K. SAM does not use compression, like the TICO adopted by other manufacturers. They do however use VC-2 and NMI where appropriate. For those in the know, they use destination switching in the core switches.

"It depends, right now there is the inevitable cost in SDI to IP conversion", said Szabo-Rowe.

Broadcast Bridge SAM is known for their Kahuna switcher, but how does it fare when TDs often dictate that they want to use Sony or Grass Valley?

Szabo-Rowe indicated that SAM have partially addressed this by Maverik configurable panels for Kahuna. For Technical Directors, the expectation is that whatever the panel the underlying features need to be the same as their favorite. “Newer generation of TDs are getting more flexible,” said Szaobo-Rowe. “Big advantage of Kahuna is 4K/HD flexibility.” FormatFusion3 rtechnology in the Kahuna switchers supports any combination of SD, HD, 1080p (level A & B) and 4K.

Broadcast Bridge The replay market also has a favorite product, how does SAM fare?

Again, operators have ruled the roost. SAM has embarked on training programs for operators. Their replay product, LiveTouch, is built on the SQ platform. This has the big advantage in that it doesn’t have to move media files with FrameMagic technology. “We need market disruption to get into replay market -- 4K gives us an opportunity”. There are plans to integrate Alchemist algorithms into SQ, a boon for international events with 50 and 60Hz feeds.

Returning to the merger of Snell and Quantel, when asked if he was looking at acquisitions, Thorsteinson said, “Right now, everyone is healthy. Consolidation happens when companies are healthy or sick.”

“The issue now is deployment. It can be tough to explain the new portfolio to sales channels.” SAM is moving very much from point products to solutions, and they are a more difficult sell. To better cover the global market SAM is opening more regional offices. Aside from the new office in the Americas, SAM has a new office in Dubai to serve the Middle East. And back on SAM's home turf Thorsteinson boasted that “In Europe, we have seen good business across the board."

"I am anticipating the best IBC ever. We are starting to see brand taking off. And 75% of products on the booth will be new. I’m a great believer in shows.” continued Thorsteinson, it isn’t necessarily where the sale is made, but “Buyers come to seal the deal.”