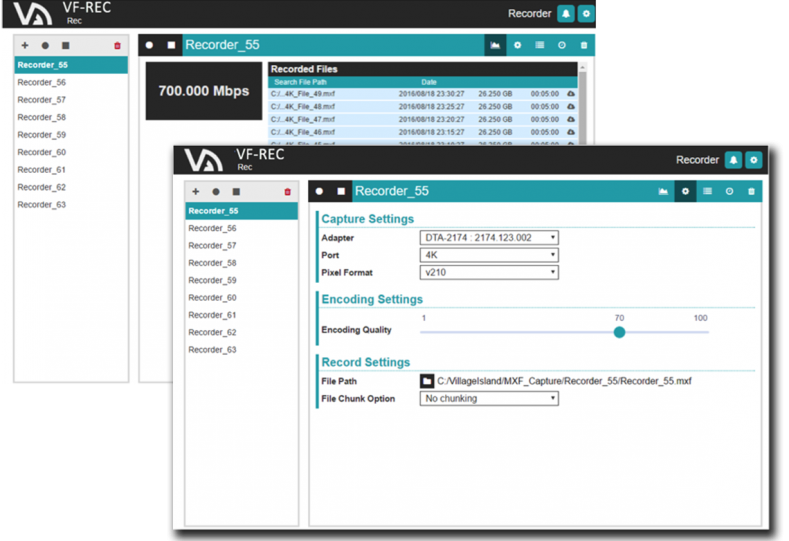 It is now possible to perform 4K baseband SDI recording using standard and affordable PC hardware. With this release from Village Island and DekTec, VF-REC receives a major GUI overhaul and introduces the “J2K” option for JPEG 2000 compression.

Recording/playout of an uncompressed 4K video stream in a PC is extremely challenging because of its high bitrate (12Gbps) and requires a special and expensive hard-disk sub-system. Without considerable integration effort it is practically impossible to record or playout 4K signals with a standard PC setup. VF‑REC v3 overcomes this problem by incorporating JPEG 2000 compression technology from Comprimato. It applies real-time visually lossless compression of 4K video, reducing the data rate sufficiently to use a PC with a standard hard-disk setup. Comprimato’s JPEG 2000 compression technology leverages the GPU resources from graphics boards provided by companies such as NVidia and AMD.

VF-REC stores the JPEG 2000 compressed 4K signal as an MXF-file (OP1a), which means the recorded files can be used by any tool supporting the OP1a MXF-file format. Version 3 also includes functionality for playing back the recorded 4K files.

The recording and playout of UHD requires the usage of a 4K capable DekTec adapter. DekTec’s current flagship 4K product is the DTA-2174 (Quad 3G-SDI/ASI Input/Output adapter), with multiple new 4K products on the roadmap. As they appear, support for these cards will be added to VF-REC.

“While 4K is gaining more and more momentum, broadcast engineers need concrete and practical solutions to archive 4K while preserving excellent video quality. “We are glad that with this software application from our longtime partner Village Island, and high performance video compression technology from Comprimato, we can bring an affordable solution to this problem.”

Bernie Rietkerken, director of marketing and sales at DekTec

To summarize, VF-REC v3 brings a new GUI look and feel, support for 4K SDI recording and playout using JPEG 2000 compression technology, as well as maintaining all its existing features, such as: recording of transport-streams and SD/HD/3G-SDI signals, scheduled recording to single or multiple files, and remote control.