Dutch manufacturer, Ardis Technologies, manufacturer of the Dynamic Drive Pool (DDP) announces that its microDDP shared storage solution turned out to be rental companies’ first choice at major events such as the 2016 European Athletics Championships in Amsterdam, the North Sea Jazz Festival inRotterdam, the UEFA Euro 2016 in France, the Open-Air pop festival Rock Werchter in Belgium and the Summer Olympics in Brazil.

The microDDP10GbE is a quiet, low weight (5kg/11lbs) portable shared storage with low power consumption. The microDDP is a fully equipped Ethernet shared storage solution, despite its small dimensions (25cm/10’’, 1U, 19’’).

The microDDP10GbE comes with RAID5 protected SSD capacities of 8 up to 60 TB with a throughput of 2200 Mbyte/s. A perfect solution for mixed environments, it works with almost any kind of hardware and software applications: editing software, render machines, indexers, MAM systems, ingest and playout solutions. 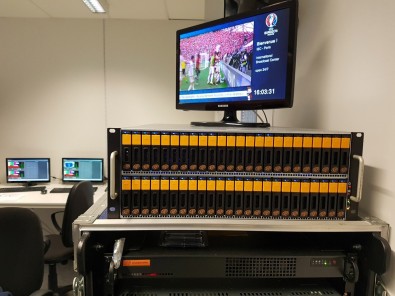 Ardis Technologies’ microDDP10GbE shared storage solution has been used at several sporting and festival events, including the 2016 Summer Olympics in Rio de Janeiro and the Rock Werchter — a large Open-Air pop festival in Belgium, and the European Athletics Championships in Amsterdam. At each event, the microDDPs were used as shared storage between EVS ingest and Adobe Premiere.

Other uses include use as shared storage between Just-In, Movie recorder and Adobe Premiere, such as at the the North Sea Jazz festival in Rotterdam. Alternately, it was used for editing jobs in the International Broadcast Centre in Paris during the UEFA Euro 2016.

MicroDDPs will also be used for upcoming events, including Tomorrowland, a large event in Belgium, which achieved more than 14 million live YouTube views last year.

With the upcoming V5 software (release in Q4 2016) a single microDDP can be used standalone (e.g. in an OB van on location) and only a few minutes later being quickly integrated into a bigger DDP setup without the need to copy data or changes at the front end are required.