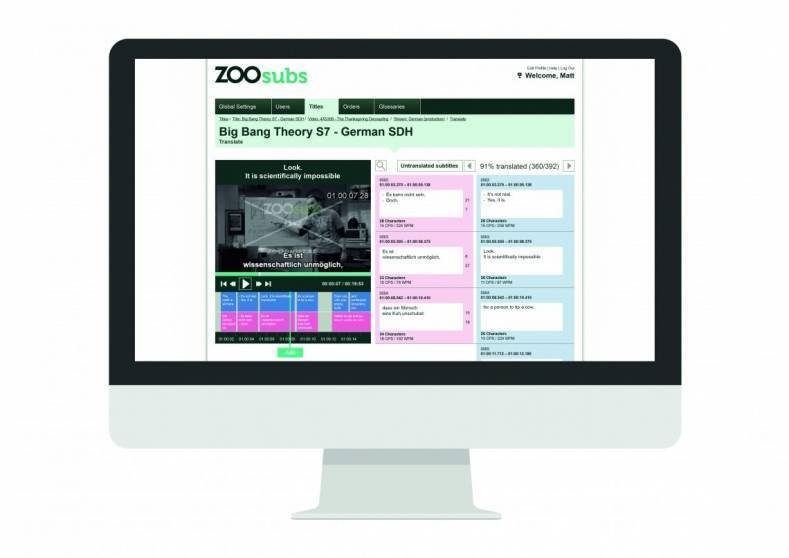 ZOO said it is now able to subtitle ads with a turnaround time as short as 30 minutes and at half the price of competitors.

With offices with in Los Angeles, London and Sheffield in the UK, ZOO Digital, a provider of media production, localization and digital distribution services has joined forces with UK-based Honeycomb TV, a video advertising distributor, to offer a faster and more cost-effective subtitling service to the TV advertising industry.

The new ZOOcloud service will be demonstrated at the IBC 2016 Show on stand 5.B48. Subtitling for TV Ads is just one of a full range of global content services, which includes digital distribution, subtitling and captioning, metadata creation and localization, dubbing, artwork localization, workflow, asset management, eScreeners and compliance editing.

ZOO Digital's cloud-based technology provides a highly efficient way of producing compliant subtitles and captions in any language or format, including TV, YouTube, Vimeo or Instagram. Honeycomb uses cloud technology to deliver advertisements to broadcasters more quickly and at a lower cost. By fully integrating the two companies, ZOO said it is now able to subtitle ads with a turnaround time as short as 30 minutes and at half the price of competitors, while maintaining outstanding quality.

Launched earlier this year and with several global brands and advertising agencies already on board, ZOO’s subtitling service is proving invaluable in the world of fast-turnaround subtitling for advertising. ZOO already has an established reputation for providing captioning and subtitling services into more than 55 languages for some of the world’s leading film and TV companies, including Apple, BBC, Warner Bros and HBO.

Similarly Honeycomb has a strong track record in the advertising industry, having been founded by James Carpenter and Richard Carter – the founders of Adstream, one of the largest global companies in the ad distribution space.

“This is a partnership that has our customers at its heart,” said Carpenter, co-founder of Honeycomb. “By revolutionizing the business model, we’re enabling advertisers to spend their budgets on the important task of creating great advertising delivered to exactly the right audiences. There’s no doubt we’re better together.”