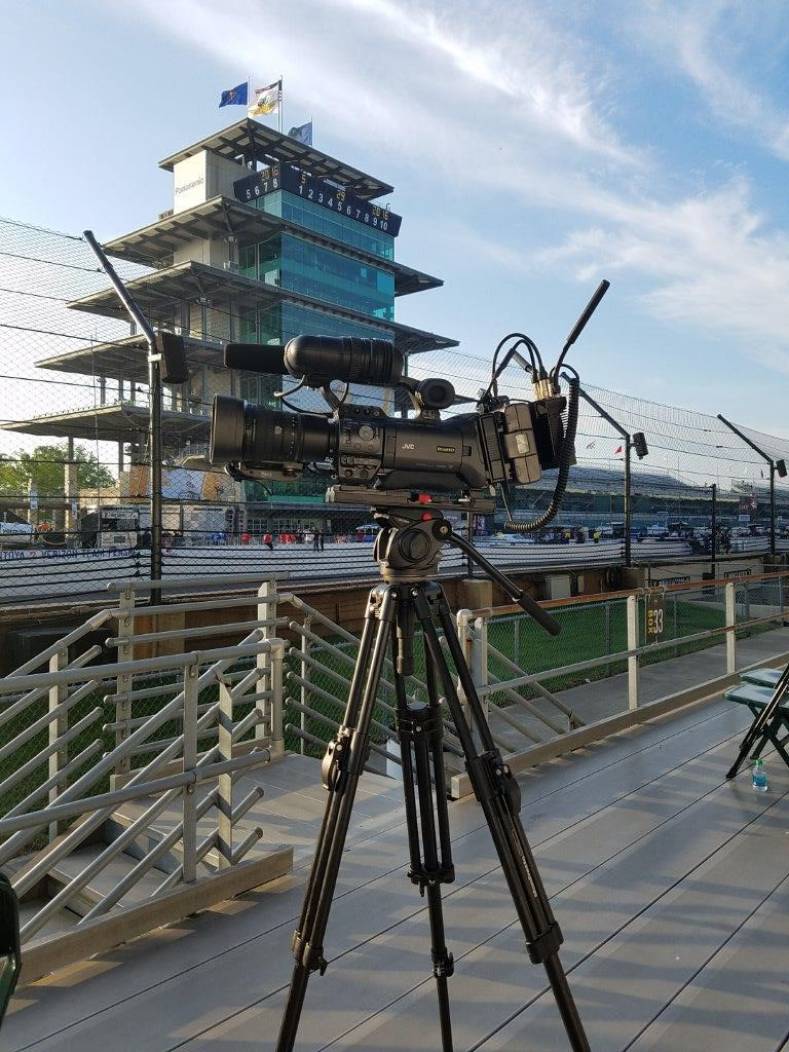 WRTV placed a fixed relay antenna on the top of the 10-story pagoda-styled structure to deliver maximum coverage for 2.5-mile racetrack.

TV station WRTV in Indianapolis, IN used the Indy 500 race as the testing ground for a private MESH video network set up around the Indianapolis Motor Speedway (IMS). The results proved that the system could deliver multi-camera coverage within the speedway grounds using a licensed microwave channel in a hostile frequency environment.

Several WRTV reporters and anchors were on site during the event, most providing live shots via fiber from designated areas within the IMS. The station’s coverage also included many live shots from the JVC cameras on the MESH network from locations around the speedway including Pit Lane, garages, campgrounds, and the Snake Pit live music pavilions.

Jeff Walker, chief engineer for WRTV, said he put the JVC system in very difficult situations, and it performed “beyond our expectations.” The system was able to double the amount of HD video delivered during the race, compared with the more costly microwave equipment that is typically used.

The speedway features a 10-story, pagoda-styled structure centered on the start-finish line. WRTV placed a fixed relay antenna on the top of the pagoda to deliver maximum coverage for the 2.5-mile oval racetrack. On the ground, two roaming JVC ProHD cameras, one JVC GY-HM650 and one GY-HM890, were each equipped with a Silvus transceiver.

For the race, which attracted approximately 350,000 spectators, Walker said he did not consider a bonded cellular backpack system, because bandwidth would be too limited for transferring data with so many users. He also did not want to use unlicensed frequencies because of the uncertainty of availability.

Instead, WRTV used the JVC Private MESH Video Network to transmit within the station’s licensed microwave spectrum. Walker said the system could include two JVC camera feeds in the same bandwidth as one traditional signal, doubling the camera capacity for each of station's two channels. Beyond the transmission of HD video and audio, the system also provided camera control, return video for live monitoring, and two-way intercom, so camera operators did not have to rely on cell phones in a crowded environment.

“Now, twice as many live shots are available to the director at any time, and you have two-way communication, so you don’t need a separate system,” Walker said. “The huge benefit is that the encoding is done in the camera itself, and the camera-back transceiver provides me with all of the extra features. You don’t get that convenience with traditional microwave transmitters.”