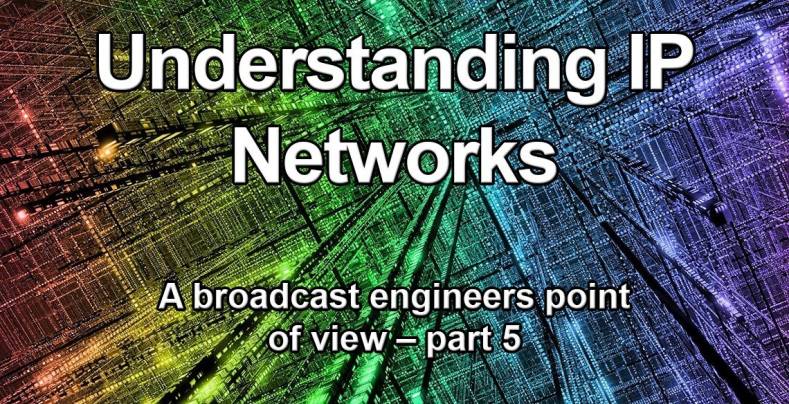 In the last article we looked at how a network can be resilient and heal itself if a link fails. In this article we continue the theme of looking at a network from a broadcast engineers’ point of view so they can better communicate with the IT department, and look at how video streams are sent through an IP network.

In traditional broadcast SDI systems, we use a point to point distribution system with one to one mapping. That is, to connect the output of a camera to a vision mixer we take the SDI output of the camera and connect it directly to one of the vision mixers inputs. If we then want to monitor the camera feed going to the vision mixer we have to either disconnect the input, or introduce a distribution amplifier (DA) which has multiple outputs. Each one of these then forms a one to one mapping with monitors, routing matrices and other processing equipment.

By introducing a DA we have effectively provided a one to many mapping system.

In the IP world, to provide one to many mapping we substitute the physical DA with an abstracted logical model using IP routers. Instead of having individual SDI cables connecting the equipment together, we take advantage of the IP-router’s ability to be able to duplicate packets and create a multicast system.

IP routing generally works on the unicast model; when a computer requests data from a server, there will be just one source and one destination. However, if a playout server wants to send an online film to many users, a mapping of one to many is used and this is called multicast. 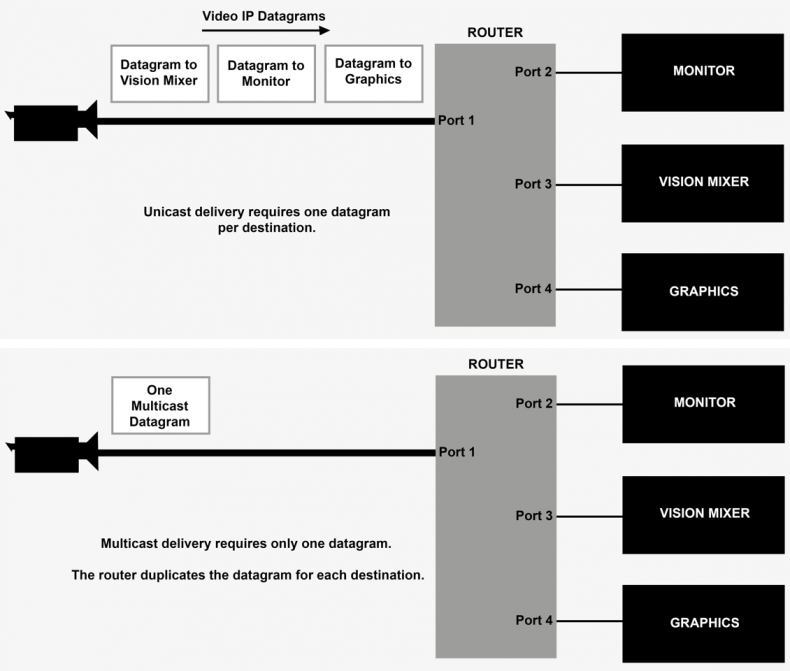 Multicasting is much more flexible than SDI routing using matrices and DA’s as we are not limited to working in the SDI domain, and have fewer cables to deal with. If a user wants to watch the studio output from their office, or the Green Room, then we don’t have to worry about running new SDI cables to them, or adding a studio to the RF distribution, we just allow the viewer access to the multicast group which could be a studio output or vision mixer bank.

The IP-router provides one to many mapping by distributing video at the IP packet level. Each IP datagram is copied and then sent out on the appropriate port of the router to the user.

The source device, such as camera, vision mixer or sound desk, has no knowledge of which devices are receiving their output in a similar way to traditional broadcast equipment. The sound desk has no knowledge of the destination of its outputs, only that they are seeing a low impedance load to a DA at the end of a twisted pair. The Ethernet output of a camera has no knowledge of where its datagrams are going and can only see the network interface card of the IP-router it is connected to.

An alternative method to multicasting would be to set the cameras' destination address of each device requiring the stream. This would cause two problems, firstly, the overhead of having to set the IP destination addresses of six cameras in a studio, each connected to potentially ten different destinations is an administrative nightmare and would be unworkable. Secondly, we would increase the network load by the number of destinations set in the camera’s routing table as each datagram would be individually sent to each device requiring the stream.

Multicasting solves both of these problems as it relies on the receiving equipment opting into the feed, and IP datagrams are only sent once to each group destination, with the routers providing duplication only on the network branches that need the stream. There are three key concepts in a multicasting system; the group address, reverse path forwarding and IGMP.

The multicast group address is the destination IP address of the equipment creating the audio or video stream, i.e. a camera or microphone. Each camera, microphone, vision mixer output or sound desk aux send will require its own group address. The multicast group addresses are special IP addresses constrained in the range 224.0.0.0 to 239.255.255.255, approximately 248 million groups. Some of these are reserved and a full list can be found at the Internet Assigned Numbers Authority (IANA).

Internet Group Membership Protocol (IGMP) provides the mechanism for equipment receiving the stream (monitors etc) to tell its router that it wants to receive a particular group. Each IP-router passes this information along the line to the source equipment so that only the networks that require the stream actually relay it, thus reducing network congestion.

The beauty of IP networks in general, and multicasting specifically, is that the data can move in both directions simultaneously. For example, a sound desk could have all of its aux sends and returns on one Ethernet cable, potentially saving tons of twisted pair cable. The sound desk becomes both a multicast receiver, and multicast broadcaster. If sufficient capacity IP routers are used the vision mixer can do the same with its video inputs and outputs, with hundreds of feet of coax cable being substituted by CAT6 Ethernet cable.

If a producer wants to watch the studio output in their office, their desktop computer or tablet can be easily configured to receive the group address of the studio output. No configuration will be required by the IT department, and no additional cables will need to be run to their office. However, this introduces the topic of network security, a topic we will be looking at in the next articles. It might be that the producers do not want the whole station to be able to see the studio output, so the routers would have to be configured to stop them sending certain streams to certain networks.