Broadcasters and sound recordists have long strugged with getting good voice levels over excessively loud background noises. Now available solutions are available for effective use on location.

If you watched either of the political conventions this summer, you noticed that journalists providing commentary in the hall had to speak closely into directional handheld microphones or they wore headsets with mics close to their mouth in order to be heard. That’s because the roar of the huge crowd in the background can easily drown out the narration.

The same happens at large sporting events, concerts or anywhere a large crowd gathers. For years, overcoming crowd noise on location has been a major challenge for broadcasters. Today, most use broadcast-style headphones, wind-protected shotgun microphones or highly-directional handheld mics in noisy situations. 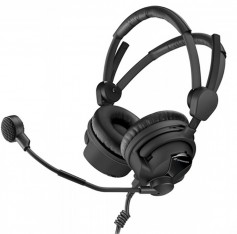 An early solution for news organizations, still in use today, is the Coles Lip Microphone, a BBC-designed handheld ribbon mic (also known as the "commentator's lip" mic) for live news reporters or sports commentators to cover events like motor racing, wrestling and large demonstrations. The Coles mic, first manufactured in the 1950s, offers better than 30 dB average discrimination between voice and background noise. ABC and CBS have used it on the air. 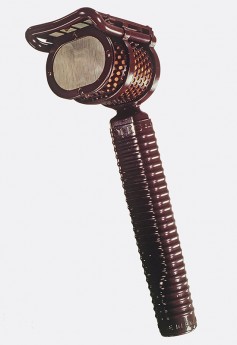 The Coles lip mic (Model 4104, $839.68) uses baffles to create an acoustic labyrinth within the body of the microphone. It’s bi-directional polar pattern controls interference. Sound from the narrator’s voice reaches one side of the ribbon more than the other at a difference in phase of 180 degrees. This causes noise cancellation.

The labyrinth design also allows lip ribbon mics to withstand wind speeds of up to 20 miles per hour without affecting speech. This resistance can be further strengthened with the use of wind shields.

The downside is the lip mic is increased bass when used at close proximity in pressure gradient mode. That’s why Coles uses a fixed mouth guard to ensure a distance of 2.1-inches between source and microphone. Any plosive effects are controlled by means of pop shields and meshes.

Today, lip mics are normally used in situations with very loud backgrounds, such as by a narrator in a helicopter flying over a forest fire. It was invented in the age of radio and is not for use on-camera, since it would look odd having a microphone so close to the reporter’s mouth. But it can save the day for narrating news events. 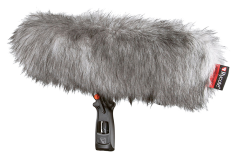 With the vast improvements in wind screens and shock mounts, many on-camera commentators now attempt to use the background sound as part of they story. They tend to filter out only wind and other extraneous noise. Ambient sound is often captured separately to use to create a sound “environment” under the narration tracks.

Some annoying sounds, though, are impossible to deal with. A good example is airplanes flying overhead. Planes can override outdoor interviews and their constant change in pitch and volume can cause havoc in the final story. It is usually best to wait out airplanes and let them pass over. Loud peaks in traffic noise can also have the same effect. This where professional judgement comes in.

For recording on-camera news interviews, professional crews now have an assortment of audio tools to deal with each situation. Hand mics, lavs and shotgun mics are essential to all sound kits, as are shock mounts and adequate wind protection for each kind of microphone. The trick is to know which to use in any given situation. Introduced ten years ago, SE has sold over 120,000 Reflexion filters, with many other manufacturers trying to copy the design. The original patented RF Pro, though, has remained an industry standard for portable acoustic treatment for recording vocals. The Reflexion filter provides a clean, acoustically neutral reduction in room reflections. Unlike basic foam imitations, the SE filter uses different layers of material that work on portions of the frequency spectrum to ensure a balanced, even sound without coloration.

We tested a Reflexion filter to record narration for a video in the living room of a New York City apartment. Midway through the recording, a neighbor next door began practicing his saxophone. Upon carefully listening to the narration, we could not hear the saxophone at all. It was totally blocked out. Surprisingly, the narration was perfect and saved considerable time and expense at a narration studio.

Reflexion filters go beyond treating narration at difficult locations. They are used in home studios to allow professional-quality narration, and on stage to provide isolation between musical instruments. Even Michelle Obama used a Reflexion filter for recording in the White House.

As audio recording has moved from the studio to the field over recent years, technology has kept up with providing the acoustic tools to deal with it. Some noise is simply too loud and cannot be controlled. But much of it can be. It just requires the right judgement from the sound recordist and the tools for the job in each situation.