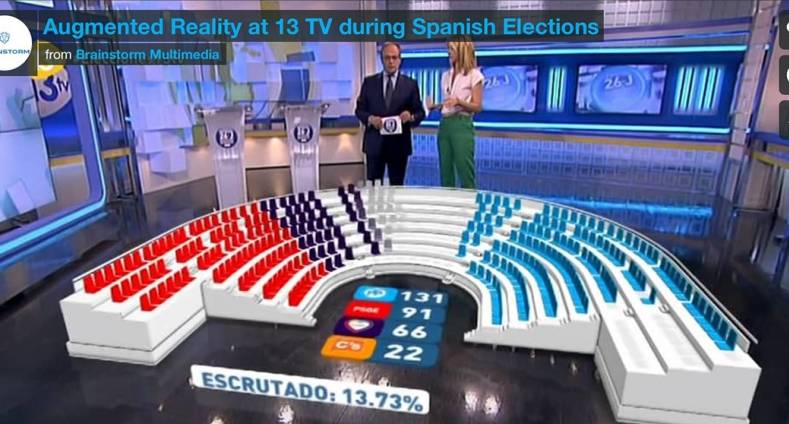 During Spain’s election night on June 26th, Brainstorm Multimedia helped TVE, Spain’s national broadcaster, and the private channel 13 TV add visual flair to the presentation by transporting the commentators directly onto the main floor of the Congress of Deputies in Madrid.

This time I asked their Development Department to give us a peek under the hood to get an understanding of the inner workings underlying these applications. I promised not to disclose any proprietary information, but they were still very generous in their revelations.

1.- What platform does the Infinity Set run on?

Standard PC running Windows 7. We are currently working on the certification of Windows10 and we expect the process to be fulfilled on the coming weeks.

2.- How does it interact with your TrackFree technology?

The TrackFree algorithms run partly in the GPU and in the CPU analyzing in real time the image provided by an SDI capture board. Many SDI capture boards brands are supported as AJA, Blackmagic Design, Matrox, etc. and up to six simultaneous HD inputs can be used or one 4K in and out signal.

3.- If graphics cards are involved, which brand are you using?

4.- We’d also like to know as much as possible about what is under the hood of your eStudio render engine. For example, how much RAM does it use in the CPU or GPU? How many processors? Kind of I/O?

Infinity Set as a product is just an Aston plug-in which in turn is just an 'interface Layout configured from the render eStudio engine'. The Track Free Technology is implemented as a plug-in of Infinity Set.

Depending on the project and the amount of models and size of pictures and movies the application can consume big amounts of memory. Complex projects can fill up the RAM and GPU memory. Standard hardware configurations usually install as much as 32GB of RAM and 12GB of GPU memory.

Depending also on the amount of input and output SDI configured devices and movies eStudio can create a big number of program threads and can easily get to use all cores of the machine. By default we provide 6 core single CPU machines.

Regarding the I/O, we support a wide range of SDI boards featuring 3G, 6G or 12G connectors.