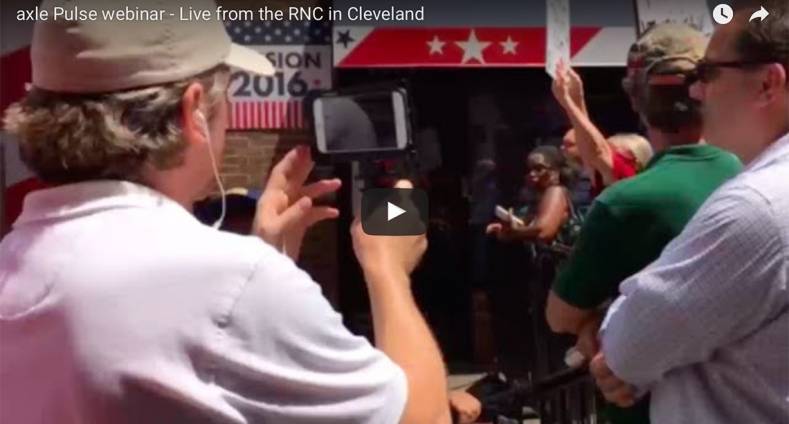 Live from Cleveland! axle Video chose the hub-bub of the Republican National Convention to demonstrate its new mobile tool for user-generated content to the cloud.

“People capturing video on mobile devices is exploding all over the world,” Sam Bogoch, CEO of axle Video told The Broadcast Bridge. “and there are lots of entities like news organizations and corporations who have a real interest in using it. Our axle Pulse lets them tap into the creativity of their audience and turn them into contributors.”

The axel Pulse system is available either as a monthly cloud subscription or as a complete software/hardware solution for purchase. It includes branded apps for iPhones (with an Android version planned), and lets contributors sign up, shoot and upload video. The cellphone videographers can also interact with the broadcaster or corporate media department on requests to capture specific material in exchange for compensation. Newsrooms will appreciate its live streaming mode which turns the smartphone into an immediate on-location news gathering asset.

Once the video is gathered, axle Video has their existing axle 2016 media management system with browser interface that works with any shared storage. 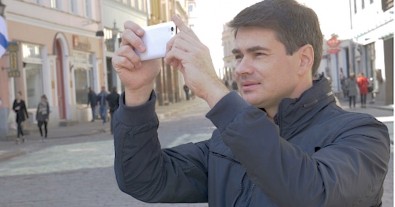 “If you are a field journalist with a IPhone, the ability to edit a news package using stored footage combined with whatever you can shoot on the scene can be a powerful production asset,” Bogoch said. “The combination of axle Pulse to gather the footage, axle 2016 to manage it, and axle Edit to cut it puts sophisticated production capabilities in the hands of reporters wherever they may be in the field.”

In addition, since axle Pulse is a branded service, Bogoch speculated on some really interesting ways this service could be used to cover big events.

“Suppose the promoter of a major music concert gave everyone in the audience the concert’s own branded version of the axle Pulse app” he said. “Then video from all their iPhones could be put up on the Jumbotron stage screens during the concert, and, because it was branded, it would become the property of the concert promoter for subsequent use. It’s a great way to make the audience part of your contribution source.”