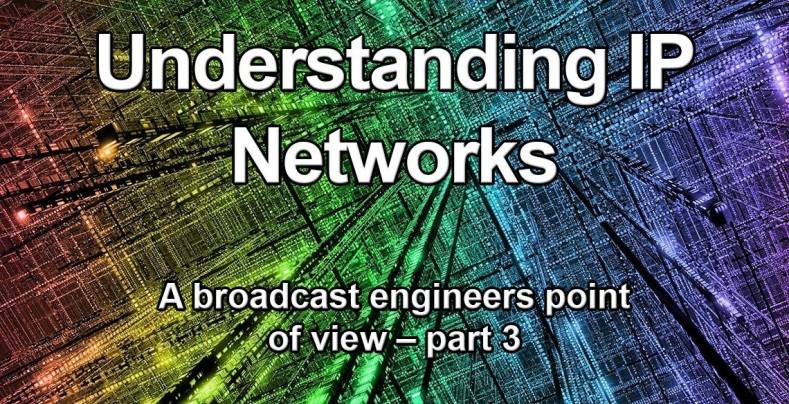 In the last article we looked at the life of an IP datagram as it travelled through a network from a camera to vision mixer using static routing. In this article we continue the theme of looking at a network from a broadcast engineers’ point of view so they can better communicate with the IT department, and take a deeper look at how a network can be resilient and heal itself if a link fails.

Routing protocols allow routers to communicate with each other so that IP datagrams can be sent to different subnets in the most efficient way possible. One of the fundamental concepts of distance vector routing is that each router only has knowledge of the neighbouring routers it’s attached to. This greatly simplifies the network administration as each router does not need an understanding of the whole network topology.

Diagram one shows a simple studio network connecting cameras to a vision mixer and monitors. Three routers are used to demonstrate the distributive approach of networks and resilience. For example, the vision mixer has two distinct paths back to the cameras; link A-B, and link B-C to A-C. Deciding which path to take and the what happens in the event of a link failure is the subject of this article. 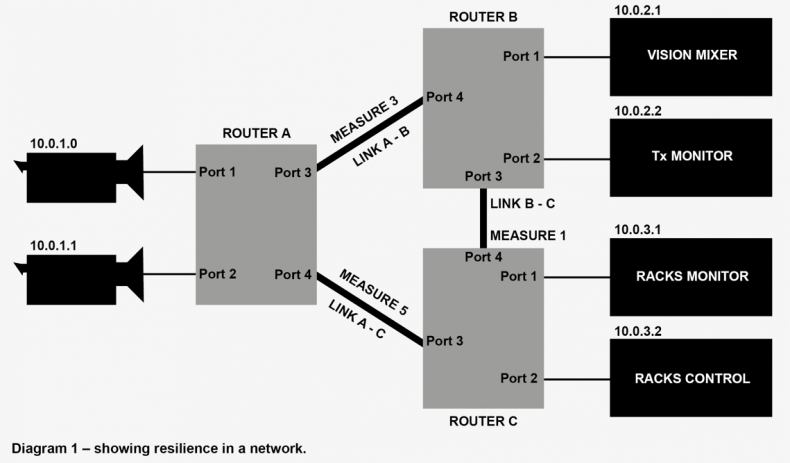 Diagram showing a simple studio network with cameras, monitors and a vision mixer

Distance vector routing is a protocol which allows routers to decide which is the most optimal route to take to reach the destination host. Intuitively, we might think that if a datagram was sent form camera-1 to the rack monitors we should use link A-C, that is router A then C. But from the metrics we can see that route A-B and B-C has measure 4 (3 for A-B, and 1 for B-C), and route A-C has measure 5. In this example, the most optimum route is A-B then B-C.

The measures are calculated using several different protocols; routing information protocol (RIP), and interior gateway routing protocol (IGRP) being another. RIP is one of the oldest DVR protocols and uses hop counting as its’ measure. In diagram one, using RIP, a measure of one exists between router A and B, a measure one between routers B and C, and a measure one between routers C and A. So to travel from router A to C, we have a measure of two for A-B then B-C, and one for A-B. IGRP improves on RIP by adding node and propagation delays to the measure. Link B-C might be fibre and A-C might be satellite, so B-C is clearly faster and has a lower metric.

If camera-1 sends video to the racks monitors, it will first break the video into small IP datagrams. The IP source address will be 10.0.1.0 and the IP destination address will be 10.0.3.1. Router A will have determined the most efficient route to send the datagram will be along link A-B. The IP source and destination addresses stay the same, but the Ethernet headers will have a source address of port 3 on router A and a designation address of port 4 on router B.

When router B receives the datagram it knows, from the metrics in the routing table, populated by the distance routing vector algorithm, that the most efficient route to 10.0.3.1 is via router C, therefore it will keep the IP source and destination addresses the same, but change the Ethernet source address to the MAC of router B port 3, and the destination MAC to port 4 on router C.

If link A-B was to fail, then router A would eventually realise that there was no traffic or control messages coming from router B, and also any datagrams sent by router C to either router A or the vision mixer would time out. Router C would remove the route on port 4 from its routing table and send error messages to its neighbours advising network timeouts on link A-B. From router A’s point of view the next best metric to the racks monitor is 5, the link A-C. It would automatically start sending its camera-1 datagrams along link A-C. The network administrator would be alerted to the lost error messages reported by router C and take action to fix the link.

As networks increase in complexity the measure process can take time to reach it’s optimum routing, this is referred to as convergence.

There are some problems with distance vector routing especially with infinite loops. The count-to-infinity problem is one of these and suffers from the fact that new routes are advertised quickly, but problems are detected slowly and the routers become unstable because a route that is being advertised as valid, is in fact failing.

Although DVR’s use minimal resource and require basic administrator knowledge, they do have some other disadvantages namely the entire routing table is sent every 30 to 90 seconds taking up valuable bandwidth.

Link state protocol is the newest edition to routing protocols and overcomes some of these limitations by only sending changes in routing tables, and updates are triggered by events such as a subnet failing, instead of being sent periodically resulting in reduction of bandwidth used. They also allow routers to gain a greater knowledge of the whole topology of the network, increasing network efficiency and resilience. However, they are extremely complicated and need advanced administrator knowledge to make them work and keep them maintained.

In the part 4 we will be looking at how to configure broadcast kit to actually work on an IP network and the pitfalls to be avoided.