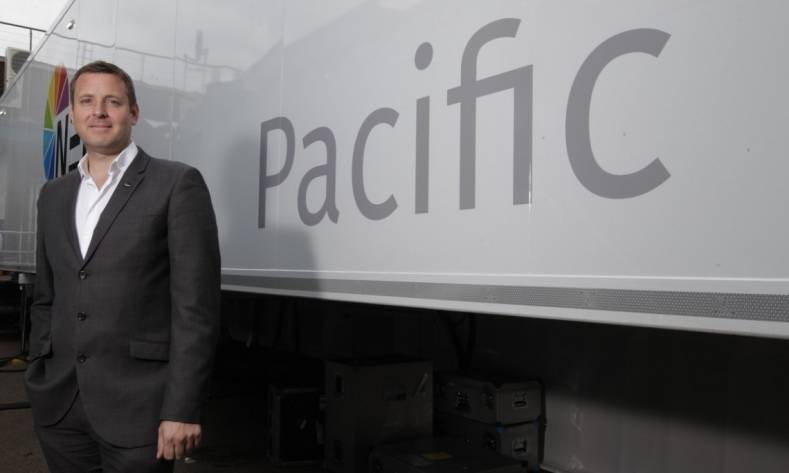 NEP UK, part of the international outside broadcast facilities group, is to add four new trucks to its fleet by the end of this year. The vehicles will be capable of Ultra High Definition (UHD) and are to replace the five units destroyed by the fire that ripped through the company’s former headquarters last year. The first truck of the quartet is already on the road, featuring technology from SAM (Snell Advanced Media), Imagine, Telex and Calrec Audio.

Pacific featured at recent coverage of the Wimbledon tennis championships, as well as on other events. The double-expanding side unit has a floor area of 1000 square feet and is intended by NEP UK to work as both an independent facility or in conjunction with any of the other new trucks, named Aurora, Caspian and Sargasso. Interconnectivity will be based on a CWDM (coarse wavelength-division multiplexing) fibre backbone, enabling 200 shared 3GB feeds to be passed between any of the units.

Each truck has been designed to accommodate up to 30 cameras and 12 digital recorder-playback systems. NEP UK has already bought 66 Sony HDC-4300 4k system cameras, 52 Canon UHD lenses and 20 EVS servers. Also included on the vision side are SAM Kahuna 9600 6ME 1080/4k production switchers.

The audio department features a Calrec Apollo digital mixing console and, in Pacific, a Genelec 5.1 loudspeaker rig. This was supplied by HHB Communications and comprises three 8351A SAM (Smart Active Monitor for automatic calibration) three-way cabinets, two 8330A SAMs and a 7069B sub bass. Commenting on this, Neville Hooper, NEP UK's deputy head of sound, said, "We carried out some listening tests at HHB and settled on the 8351A monitors. We felt they stood out head and shoulders above the Genelec 1030As that we'd used before. Their manageable DSP means we can deal with what can sometimes be a challenging acoustic environment using the GLM 2.0 software."

HHB also provided 68 Wohler AMP1-16-M audio monitors, with the four vehicles having 15 of these units each. The remaining eight will be used for NEP UK's flyaway packages. "We used the AMP1-16-M in our previous trucks Atlantic and Gemini and it's a neat solution because of its size. It's very compact but gives you all 16-channels of monitoring in a screen as well as displaying the video input." Other audio includes Studio Technologies Model 41 and Model 47A interfaces for interruptible foldback and connecting two-wire party line intercom with four-wire audio circuits.

Steven Jenkins, president of NEP UK and Ireland, commented on the new vehicles, "The creation of four new state-of-the-art UHD trucks equipped with the latest technologies in under a year is a real testament to the NEP team's hard work, dedication and skills. The launch of Pacific marks a new chapter for NEP UK and we look forward to getting the other trucks on the road by the end of the year."

Aurora is due to be ready by the close of July, while Caspian and Sargasso are expected at the end of October.