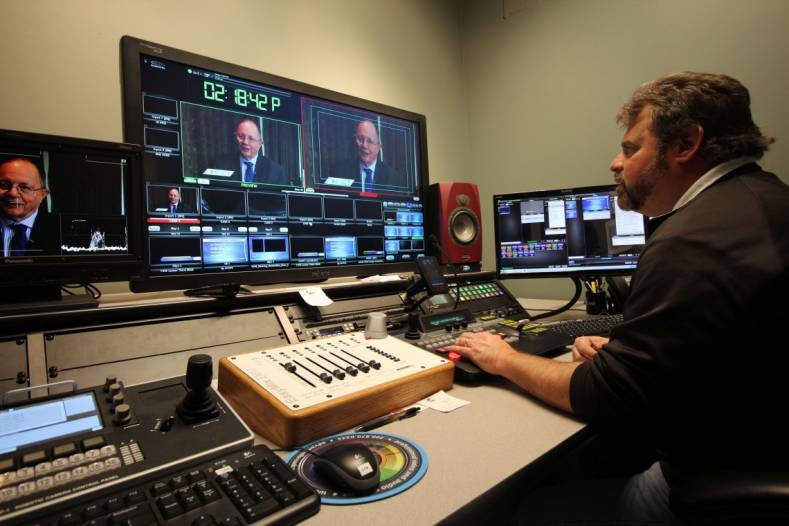 Based in Olympia, Washington, TVW, the Washington Public Affairs Network, offers gavel-to-gavel coverage of the Washington State legislature, as well as coverage of commission and agency meetings, and public policy events. While no cable system in the state has provided TVW with an HD channel, HD footage is available online and through three feeds that TVW delivers to the Capitol Campus, located about a half-mile away.

Looking to improve its on-cable (and online) look, TVW has converted its entire plant to HD-SDI. The $3.4 million project was designed and implemented by system integrators Advanced Broadcast Solutions (ABS) and included an overhaul of three existing control rooms and master control, plus the addition of a fourth control room and two new mobile production units.

ABS previously worked with TVW to migrate the civic channel to an SDI workflow, and was the obvious choice for the new upgrade. “Most of our equipment dated back to TVW’s inception in 1995,” said Renee Radcliff Sinclair, president of TVW. “We simply couldn’t upgrade our SD equipment anymore.”

There are 15 rooms within the Capitol Campus equipped with at least three cameras for live coverage, including the floors of the House and Senate. TVW is also planning to add cameras in the governor’s conference room later this year in time for the 2017 legislative session.

Footage from all 49 Capitol Campus cameras is sent back over fiber to the TVW facility. The signals are brought back to master control, then “salvo” routed to one of four control rooms. It is a very unique routing system controlled by Telemetrics software. When a chamber is recalled, all resources associated with that chamber – including video, audio, graphics, control, and metadata (such as the agenda through an XML feed) – are routed to a specific control room.

While each camera within the TVW system has an HD-SDI out, it also has its own IP address and can be independently streamed. When one of the meeting rooms is not being controlled by one of the four control rooms, TVW can control any of the cameras over IP, adjust the picture, and stream its footage. As a result, TVW can stream up to 15 concurrent meetings, if necessary.

Every hearing is distributed online live and archived for on-demand viewing. TVW uses a Grass Valley STRATUS content management system to push recorded materials to a storage facility in Colorado, which archives all footage on LTO tape. Marc Gerchak, director of engineering for TVW, said TVW has logged more than 5 million plays of online content each year over the past few years.

The three updated control rooms were designed to reduce personnel requirements during productions. Built to the same specifications, each one features a Broadcast Pix Mica 1000 integrated production switcher. Siegel said Broadcast Pix was the best choice for the facility because of the built-in toolset that includes a multi-view, CG, and clip stores, as well as the ability to control external devices.

In the fourth control room, which is used with the facility’s production studio (as well as for additional legislative coverage), ABS installed a Broadcast Pix Granite 5000 system. TVW produces a daily Legislative Review program and Capitol Headlines news briefs that are updated twice a day, plus other weekly series.

The studio is equipped with four Panasonic AW-HE130 PTZ cameras, which are mounted to Telemetrics Televator elevating pedestals. The cameras are controlled through Telemetrics and can store and recall camera positioning. Each camera is also equipped with a custom 13-inch LCD prompter system.

The Mica’s integrated CG has also improved field productions. In the past, crews would have to return to the TVW facility to add graphics. Now, graphics are inserted live during the production.

Sinclair is excited to have the new system in place in time to handle the additional production requirements of this year’s election coverage. “The quality of the product is so much better,” she said, “and viewers are very positive about the changes.”

Though TVW was unable to broadcast live during the four-month installation, the channel stayed on the air throughout the upgrade – and the project was completed in time for a live Jan. 7 press event.