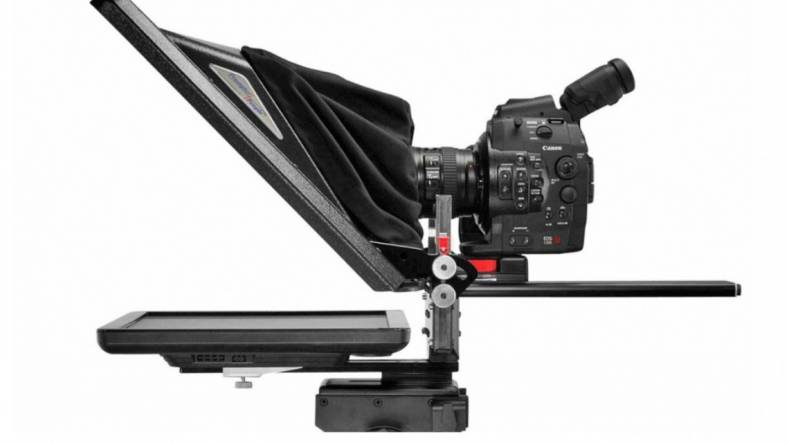 Teleprompters are used in a variety of industries to help on-air talent look good while presenting. Image: Prompter People

While they are not sexy to look at or technically sophisticated when compared to other tools, TelePrompTers have saved more than a few careers in the news and television production business. Prompting systems generally consist of a dedicated computer running software, a Thin-Film Transistor (TFT) active-matrix display screen in front of the camera lens, and a piece of beam-splitter glass that reflects the image off of the display and makes scrolling text easy to read from 15 feet away.

Like many production tools, the prompting category has been hit hard by the influx of foreign, less expensive substitutes that feature consumer-level devices like tablets and smart phones, which are used in place of the more traditional TFT displays. Particularly “straight read” Teleprompters that leverage an Apple iPhone or Android OS cell phone. There’s no doubt that they these lower-level replacements are being used more and more, both for cost and convenience reasons, but it’s hard to compare them to larger, dedicated systems.

“In Teleprompters, like many other technologies, you get what you pay for,” said Mark Ditmanson, president of The Prompter People. “If the image quality is bad or the software doesn't run right, your customers are going to notice and be very disappointed.”

Indeed, with the explosion of Internet-based content, the prompting market has expanded significantly, leading to sustained business for companies like AutoCue, AutoScript and Prompter People. All have continued to sell to broadcasters and TV studios despite the competition. That’s because rather than fight the trend, the makers of high-end prompting systems have embraced these new technologies (like LED-Backlit monitors and IP-based software) and developed systems that themselves are smaller, lighter and less expensive—both for studio and field use. 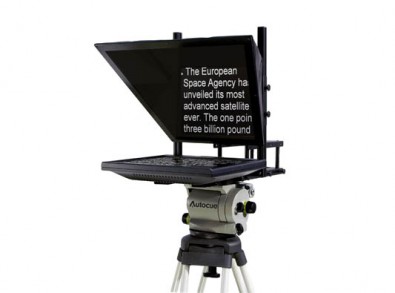 Makers of traditional teleprompting systems are fighting a cost/quality war with overseas competitors.]

Some new technology advances now found in Teleprompters include the ability to stream a news script to an iPad in the field for a late-breaking story and to send scripts wirelessly in the studio as well.

“Among the established broadcasters in the U.S., there isn’t a very big trend to go smaller or necessarily cheaper,” said Aaron Brady, Business Development Manager for Prompting at The Vitec Group. He oversees the AutoCue and AutoScript brands, which are both owned by The Vitec Group and made in Stamford, Conn. He said his company sells more 17-inch LCD screen promoter systems to TV stations than any other size. AutoCue also offers a higher end LED backlit albeit more expensive system that is now in use at several network studios. “It seems to be the sweet spot for size. In general you want to have about one inch per foot, whereby most studios shoot 15 feet from the on-air talent.

Recognizing the trend for smaller and lighter setups, AutoCue and AutoScript both sell prompting systems that use an iPad as the main screen. However, Brady said these portable systems are not ideal for a major TV studio. 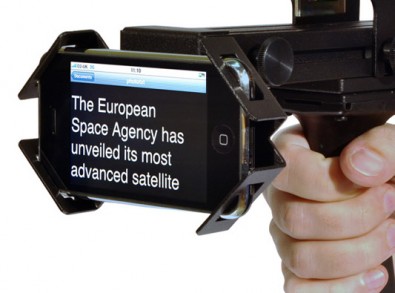 AutoScript’s ultra-lightweight "straight-read" iPhone prompter is designed for hand-held applications, such as newsgathering in the field.

“Our sense is that customers like to have a physical cable to plug in and the lower end systems don't offer that,” he said. “The larger, dedicated systems are also easier to work with and give users a lot confidence that they are going to work correctly every time out.”

Brady cautions customers looking to use iPad-based systems to be careful that it includes everything needed.

“There a little bit of a gotcha when talking about iPad-based systems,” he said. “The talent is forced to prompt themselves. The way everyone markets an iPad prompter is by selling you the mounting hardware and leaving you to go find an application to run on the iPad locally. We think this isn't the best workflow. Most people expect that if there going to have talent in front to the camera, they are going to be very inexperienced talent and they need a dedicated prompter operator.”

AutoCue’s new Enhanced Prompting Information Center (EPIC) line of prompters now includes a 17- and 19-inch version as well. The monitor can collate talent information, camera number, real time clock and talent feedback monitor are all in one place. This avoids the talent having to look at different places in the studio to find the script during a live broadcast or taped production.

In order to distinguish itself from the low-rate completion, AutoCue and AutoScript sells iPad prompters is in an extended desktop set up, allowing users to use a real piece of software with a full keyboard for edits and a full complement of controllers.

AutoCue’s newest iPad-based prompting system uses a 13-inch iPad Pro tablet and, Brady said, is closer to what professional news stations and TV studio have requested until now. The hood on the company’s latest assemblies accommodate a much wider range of lenses that was possible with a prompting system of this size. Even a wide diameter cine prime lens can be used with it. 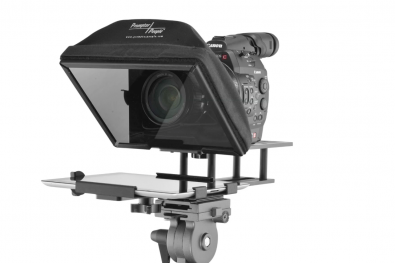 Prompter People’s UltraLight iPad Teleprompter can fit on a wide range of cameras, from small handheld models to a DSLR.

“While the technology is changing fast,” Brady said, “Broadcasters still want to work the way they always have, so giving them a system that mimics what they had in the past is what will give our products the most traction.”

Brady said his company’s systems can be used in a myriad of ways. Some use an iPad as an extension of a desktop computer, so that the station can stream a news story to the iPad prompter in the studio. In the field, AutoCue and AutoScript both offer the ability to send a selection of stories from the newsroom rundown to a cloud-based service or FTP server, where it is then downloaded on the iPad and the talent prompts themselves.

Campbell, Calif.-based Prompter People’s Ditmanson said the advent of the iPad in video production has changed the way they design systems and the type of systems they sell. His customers want smaller, more portable systems that cost less yet do as good a job as higher end prompting systems. To address this, they came out with a new iPad Pro system a week after Apple announced it.

“We’re selling a lot of iPad systems, which cost less,” Ditmanson said, adding they also sell a full range of products from full studio setups (The Pro Line Series) to iPad-based systems (from its UltraLight Series), “but the market for these type of systems has gotten a lot bigger [YouTube, Bloggers and other non-broadcast customers], so our volume has gone way up. There’s no doubt professionals are using more iPad-based systems than the traditional larger systems. We’ve learned to adapt accordingly.

Popular features include wireless controllers and SDI inputs on the larger prompters to allow users to work with a single inexpensive BNC (coaxial) cable. Production crews heretofore used VGA and HDMI cables, which are heavier and more bulky.

“HD-SDI is becoming a more popular input sources than it was before because it less costly to use and the signal quality is pristine,” Ditmanson said. “At the end of the day, the less expensive a product is, the more people buy it. So, we've evolved our products to give customers what they want. In many cases, an iPad-sized screen is all a reporter or on-air talent needs, as long as the text is larger enough to read from 15-20 feet away.”

While challenging, most prompter companies are weathering the storm and making their margins. Yet, it’s not easy in today’s competitive landscape.

“We sell to a more professional audience, but unfortunately there are a lot of really inexpensive knockoff systems that tend to confuse people,” Ditmanson, said. “So, it’s important to buy quality if that’s what you are shooting for.”

“Business is good because there is more demand due to the current election coverage and other major events around the world,” said The Vitec Group’s Brady. “It’s been a bumper year for us.”