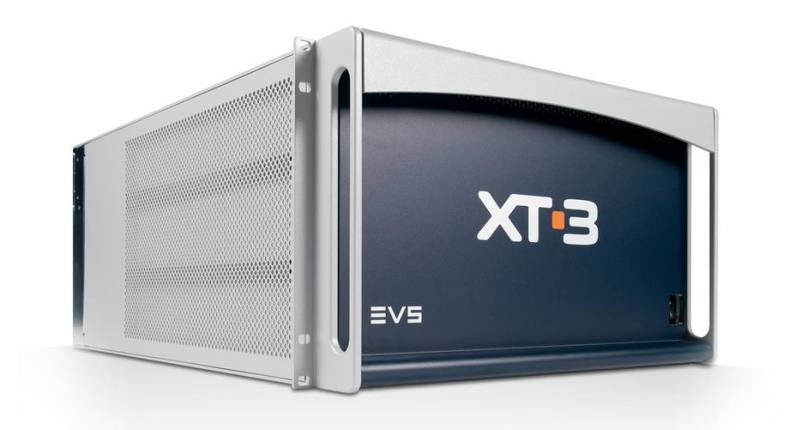 Video server vendors are advancing their technology into 4K, IP and increased channel density to allow broadcast and cable customers even greater flexibility in their business choices. In a two-part feature The Broadcast Bridge examines some of these changes. Part one features EVS and Tightrope Media Systems. Part two features Grass Valley, Harmonic and Dalet.

EVS is the market leader for servers in live event production. It recently extended the capacities of its XT3 server range with a new configuration called ChannelMAX, which offers increased channel density. This doubles the usage of the original hardware and will let users add more channels as they become available. As a result, XT3 servers with ChannelMAX permit extended support of High Frame Rate (HFR) SuperMotion cameras.

“The XT3 ChannelMAX is the only server on the market to offer as many record and playback channel configurations for HFR cameras – and UHD/4K,” says Sebastien Verlaine, marketing manager EMEA. “The XT3 also lets operators benefit from its Dual LSM mode, where two operators can work simultaneously on separate LSM remote control panels connected to the same XT3 server.”

Earlier this year EVS launched the XS3 series server which has a modular approach, allowing expansion from two to 12 channels through software licenses.

The software engine of the XT3 and XS3 servers has also been updated with version 15.0 Multicam software, enabling expanded multiviewer support, with integrated Tally and UMD (Under Monitor Display) support from facility control systems. It has also enabled further support of various Super Motion camera configurations for market utilisation.

The XT3 and XS3 series have supported UHD/4K since 2013. Later this summer, EVS will start delivering the XT4K series. This provides four channels of UHD/4K with 10bit support and an XAVC-4K native codec.

The firm's IP4Live initiative is its framework for using IP. Under this framework, EVS participates in various industry bodies to progress the open standards to migrate to IP, including VSF, SMPTE, AMWA, and more recently, the AIMS Alliance. One of the first products in this category is the XIP Option for EVS Live Production Servers, which enables existing servers to be migrated to an IP Infrastructure when customers begin to implement IP based systems.

EVS is a member of AIMS and has long promoted and demonstrated SMPTE 2022, AES-67, and TR-03, TR-04 as the paths towards open standards and interoperability.

“It is under this same framework that we are proud to demonstrate, and advocate for how these existing and emerging standards of the AIMS roadmap will allow all vendors to build the IP based systems of tomorrow,” says Verlaine.

Tightrope Media Systems has provided a complete server and automation platform via its Cablecast series for years, but the new Cablecast Flex video servers are, according to the company, “a gamechanger”.

The big difference is higher channel density. Typically, smaller TV and cable broadcasters (which include PEG stations and digital sub-channel broadcasters) operate three or more channels, and require separate servers for each. This can get complex and expensive, explains Steve Israelsky, VP Sales and Marketing.

The flagship product of Tightrope's series, Cablecast Flex 4, features four channels that can be configured with assignable input and outputs for each channel. “That increased channel density reduces equipment requirements, lowering both initial and operational costs tied to space, power, cooling and maintenance,” he says. “Furthermore, it future-proofs broadcasters’ needs as their channel line-ups evolve.”

A second product in the series is Cablecast Flex Lite which supports one input and output channel for very basic broadcast requirements. Both models offer built-in storage, with Flex 4 servers available with up to 32TB of storage and RAID5-configured for high fault tolerance.

Since most of Tightrope Media's customers are non-commercial broadcasters, they don’t have the pressure to be early adopters. “We prefer to let the market evolve a bit longer before we collectively really invest in solutions for 4K UHD,” explains Israelsky. “While 4K has arrived, it’s not yet a given that this will be a widely adopted format; in fact, many vendors are already working on 8K solutions. We’ll be watching the market evolve, and will adapt to customer needs in an intelligent manner.”

Tightrope is working to incorporate IP streams into its customer's broadcast playout architectures, and it also supports cloud-based streaming to the web – both live and on-demand - through the Cablecast Reflect series. “However, like our vigilance of 4K, we are not working on transitioning our customers to complete IP-based workflows until an industry-wide standard is adopted,” says Israelsky.

“The most advisable route for our customers is to wait until IP standards have been adopted by SMPTE before they make investments in their IP infrastructures,” Israelsky adds. “But, our customers have always trusted Tightrope to provide the right solutions, and support the upgrades and transitions they need when it really matters, both saving them costs and providing an intelligent path forward.”