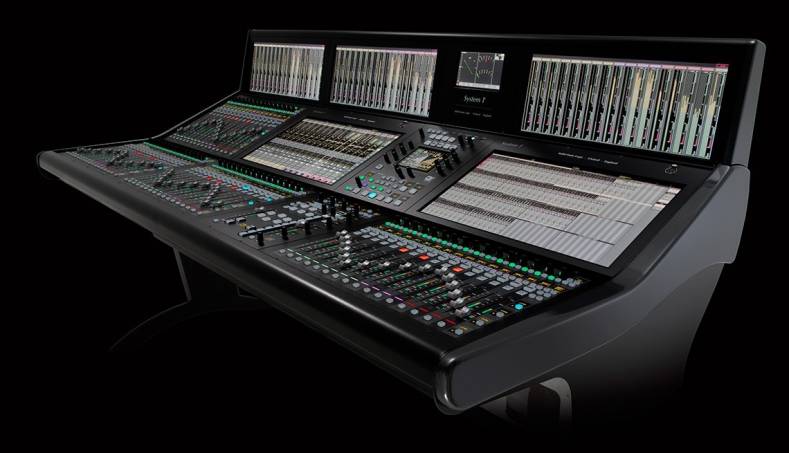 The audio guys are always first at new technology. They have the huge advantage that the uncompressed data rate of stereo audio is about one-thousandth the bandwidth of HD video (1.5Gb SDI). Audio over IP is ubiquitous in telephony, and plays a major role in broadcast audio. Audio processing was once the preserve of digital signal processors (DSP). MADI routing, and AES3 circuits. Now we see several console manufacturers moving to IP transport and commodity CPU processors. Solid State Logic released a new broadcast console at the 2016 NAB Show that demonstrates just how far audio has reached in the world of all-IP and commercial off the shelf (COTS) hardware,

The new System T is a ground-up redesign with the new Tempest processor engine. Operations are now performed in software running on generic Intel CPUs in industrial PC hardware. The processing supports up to 800 audio paths and 192 mono mix busses. Each processor Engine can handle up to 3072 inputs and outputs. Multiple Tempest engines can be used for main/backup or for additional processing. In complex live program production, the console can be reconfigured on the fly without interrupting the audio. The previous generation of broadcast consoles, the C10 and C100 used SSL’s Blackrock DSP.

The console replicates the traditional functions of SSL broadcast desks, but running processes as software rather than using DSPs allows for additional flexibility that a truely networked environment can achieve.

Of course the move to COTS doesn’t mean driving a console with keyboard and mouse. Live audio production needs a proper control surface. The System T boards have borrowed ideas from SSL’s live consoles, the L300 and L500. The control interface is supplied in a number of configuration to suite applications from small news studios up to complex live event mixing. Built around a core master tile, additional tiles with faders, encoders or screens are added into bays alongside the core control bay. Optional meter bridges complete the control surface.

The use of software for System T means that the architecture is not constrained in the way that DSP-based consoles can be, however much thought is given to the DSP design. A software console offers almost unlimited configuration options, allowing the operator to ‘build’ the desk to suite the production they are working on. The console can be reconfigured in an instant for the next show.

The networked architecture means that secondary control surfaces can be added very easily. A second control surface could be added for a separate music mix at large events. A common requirement is to add a small console to play in sound effects, clips and stings, referred to in some circles as a ‘grams’ (gramophone or phonograph) mixer.

Consoles are usually installed in systems with MADI and AES routers in broadcast applications to provide all the assignment of inputs and outputs. This is especially so when consoles can be assigned to different studios or additional sound effects consoles are used. Where System T has taken a leap forward is to leverage Audinate’s Dante HC technology. This integrates AES67 for transport, plus the SSL console uses Dante for routing control in addition to data transport. This means a conventional audio router can be replaced with a regular IT network switch at a fraction of the cost. As an example a 24-way, non-blocking GbE switch offers the equivalent of a 12,000 x 12,000 TDM router. SSL bridge products can link to legacy embedded SDI, MADI and AES distribution. Wiring is simplified, as stage boxes for I/O sit on the IP network, just needing an Ethernet connection.