KRBK owns and operates one of the largest commercial SFNs in the country. I happen to be the station contract transmitter engineer who recently worked with KRBK Director of Operations Brent Bolinger and station engineer Art Morris to help GatesAir install two new Maxiva transmitters. The Maxivas replaced two aging transmitters in a five-transmitter TV SFN.

When's the best time to replace a TV transmitter? The answer is when you have to. KRBK owns five Pineapple TV transmitters. Unfortunately, Pineapple is out of business and the transmitter PA modules are individually tuned and phased for their unique positions in each transmitter cabinet. Pineapple PAs are not interchangeable.

Several months ago, the station hired Gary Baker with Pineapple Service, a company formed to help broadcasters maintain aging Pineapple transmitters. Baker spent two weeks visiting all our transmitter sites with a full inventory of test gear and spare parts. He set up his own work bench, rebuilt all the failing or failed PAs.

Baker recalibrated every PA in every transmitter for phase, drive and gain with screwdriver adjustments that can only be made on a properly equipped test bench. When the PA repairs and calibrations were complete, each site was making 100% power and all currents were balanced. That state of unity and harmony began to fizzle in about the time it took to turn off the lights, lock the transmitter building door and exhale. 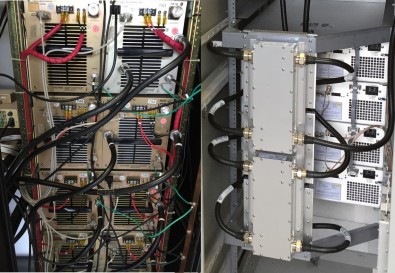 PAs behind the rack doors of the outgoing Pineapple (L) and the incoming GatesAir Maxiva (R).

Within weeks, metering showed several PAs in all five transmitters sliding downhill again in one respect or another. Some of the failing PAs had been fixed. Others had never been touched except for recent calibration. It became clear it was time to move on.

Now is probably not the best time for a station whose channel is up for auction to buy a new transmitter, but the present transmitter miasma short-circuited that anticipated timetable. The decision was made to replace the two transmitters that cover the most viewers.

The station purchased two GatesAir air-cooled Maxiva UXAT transmitters, a UXAT-4AT 3KW TPO for city of license Osage Beach, and a UXAT-5AT 5KW TPO for the Springfield MO site. The first thing we loved about the Maxiva was its interchangeable PAs.

Many stations generally replace transmitters about every 15 years or so. Replacing two separate transmitters in two days is something most station engineers never get a chance do. As we quickly learned, every installation is similar but different.

The Springfield replacement was scheduled for Tuesday 5/17, which turned out to be the night of a highly-promoted Megyn Kelly - Donald Trump interview on FOX TV that aired at 7 p.m. Although a high percentage of the Springfield market watches via satellite, every viewer counts. The Springfield transmitter was still off the air 45 minutes before the big FOX TV interview was scheduled to air on KRBK and the GM was getting nervous. Cell phones were ringing.

We're engineers. We eat pressure for breakfast. We signed the new transmitter on the air at 6:30 p.m. with 30 minutes to spare and barely got an adrenaline rush. Cell phones went quiet. Mission accomplished. Transmitters were wired for available AC service. The 3KW was 220v single-phase, the 5KW was 220v 3-phase. Operationally it made little difference.

We had the good fortune of being assigned GatesAir field engineer David Sanderford to do the commissioning. In fact, David did nearly all the work including most heavy lifting. We asked questions and helped him with more hands.

The workflow at each transmitter replacement site was identical. Phase 1: Turn off the transmitter circuit breakers at the building power panel. Disconnect the AC power connection in the transmitter, carefully uncouple the RF plumbing and slide the old transmitter out.

Phase 2: Slide new transmitter in place, wire it to the AC distribution panel and make the RF plumbing line up and fit. Plumb the copper, tighten the clamps and bolts and prepare to sign-on a new transmitter.

That idea sounds easy enough and it is, especially when the installer arrives with a positive attitude. Its also a good sign when the installer brings along a selection of bullets, reducers, elbows, other RF components, appropriate test gear, and a clean and complete set of installation tools. There was enough transmission line on hand at the 3KW site to cover the height difference without moving the mask filter or adding Unistrut. The elapsed time from sign off the old to sign on the new and start performing preliminary proofs was not quite 5 hours.

The 5KW site wasn't as easy. It required a trip to Lowes for some custom engineering supplies because things didn't line up as they did at the first site. Sanderford had a solution that required more Unistrut and all thread rods than he had in stock. He had the rigid copper line we needed to bridge the RF gap to the shorter transmitter. He cut off the length that we needed and removed the burrs.

The trip to Lowes, an accompanying lunch stop and custom cutting and installation of the Unistrut and all threads added about three hours to our off-air time compared to the day before. Without a hint of panic, the transmitter was on the air 30 minutes before the big FOX TV prime-time interview. There wasn't a single surprise, and at the end of the day everyone was pleased.

At both installations, Sanderford measured everything at least twice. He used a level on all the RF plumbing and hanging filters, and paid special attention to construction details that nobody but a transmitter engineer would probably notice. His pride was contagious and we all focused on making the installations as clean and pretty physically as they were electronically. 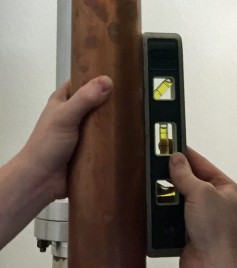 Plumb and level were verified at every opportunity.

When the hardware installation was complete, he individually verified the performance of the mask filter, combiners, feedline and antenna to eliminate each as a potential source of any problems. The station doesn’t own the gear required to perform such tests. Verification proved the validity and compliance of the RF hardware.

When we thought we were ready to power the transmitter up, we verified all the work again just to make sure. Agreeing the system was ready for electricity, we restored the circuit breakers and powered up the new transmitter. What used to be known as “the smoke test,” has evolved into plug-and-play with settings and plumbing.

The first thing we noticed was how quiet the Maxiva ran. In moments, we were transmitting programming on Channel 49 and watching it on our local TV. We didn’t even hold our breath, which is something we had become accustomed to when powering up a Pineapple. 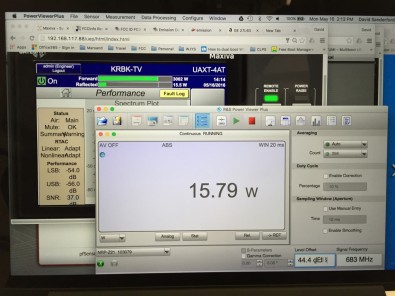 Sanderford began his tests by verifying the combiners, filters, feedline and antenna were working together with minimal rejection. He verified the exciter output power, and the power output and reject power of each PA module.

He then moved on to measuring and verifying shoulders and harmonics. The system passed all tests and met all specs at both transmitter sites. However, because the 5KW unit had more PAs and different RF hardware than the 3KW system, both were tuned slightly differently for the best automatic responses to issues relating to shoulders. The exciter offered several numbered choices to try and for the best and fastest automatic responses. The GUI and a little patience made it simple to determine which choice selection worked best. 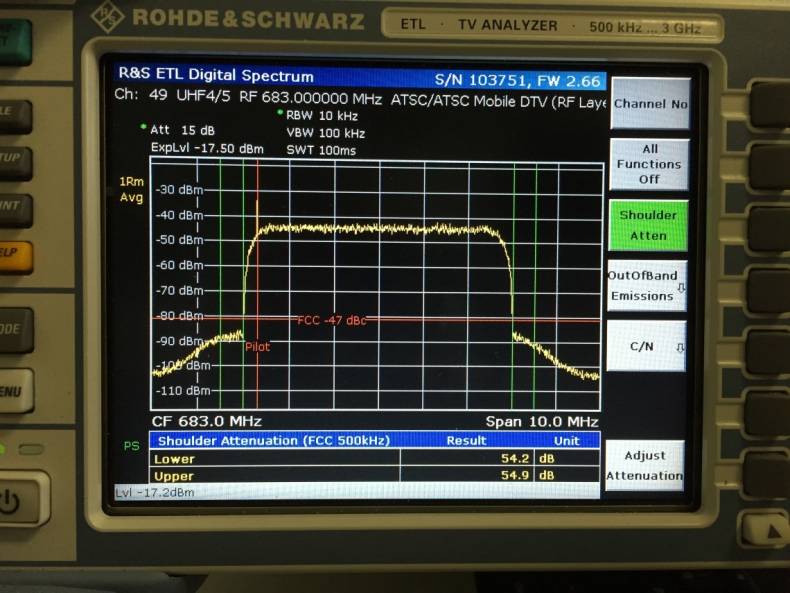 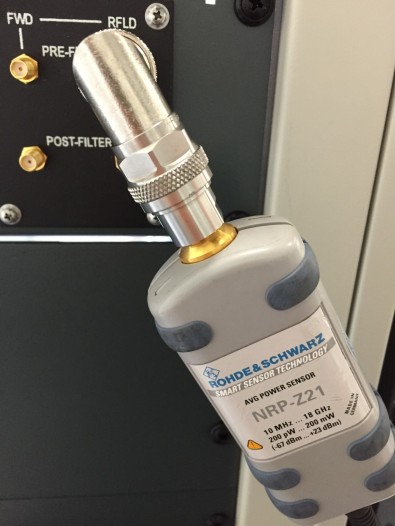 A Rohde & Schwarz NRP-Z21 AVG Power Sensor provided the means to measure forward and reflected, pre- and post-filter power outputs in the RF chain on the same laptop used to access the transmitter’s GUI.

Because KRBK is a SFN, the local GPS receiver also feeds the exciter. The exciter timing has a unique specified delay at each transmitter location so they all stay in sync. It happens that the Springfield exciter has the longest SFN delay. Delay accuracy was verified at each transmitter’s exciter.

The Rohde & Schwarz ETL TV Analyzer virtually automated the proof of performance tests once it knew the TV Channel. It was the hub of proof measurements and it saved screen shots and selected data throughout the tests.

Easier on the AC and the AC

The net result of the transmitter replacements is a huge improvement in reliability and efficiency at both sites. It also brings the station two steps closer to being prepared to change channels after the spectrum auction.

In addition to providing a reliable signal at 100% licensed power, the station is anticipating lower electrical utility bills at the transmitter sites. The AC to RF efficiency of the Pineapple transmitters measures approximately 10-15%. The GatesAir transmitters promise at least double that. Higher efficiency also translates into in reduced air conditioning operating expenses and lightens the load on transmitter HVAC systems.