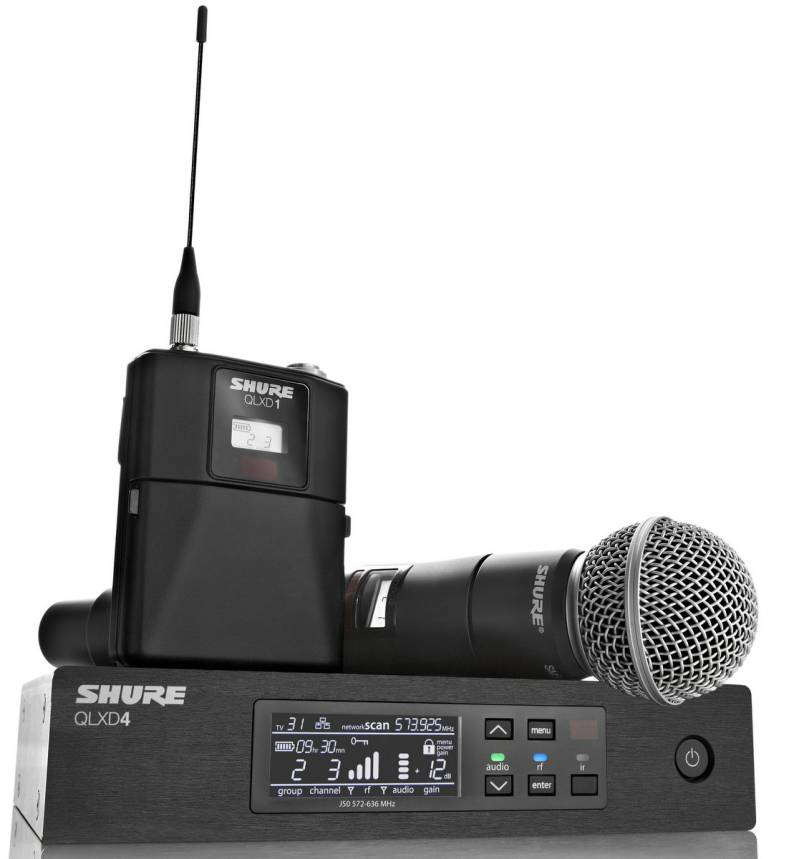 Shure has introduced VHF versions of the ULX-D and QLX-D digital wireless microphone systems. These made their first appearance at last month’s 2016 NAB Show in Las Vegas, along with a preview of the latest release of the Wireless Workbench System control software. Among other announcements from Shure are that selected Yamaha consoles are able to control and monitor the ULXD4D and ULXD4Q digital wireless receivers.

The Shure ULX-D and QLX-D now have 42MHz of tuning bandwidth in the VHF capability and offer an alternative to their counterparts in the increasingly crowded UHF range. The new versions of the digital radio mic systems have the features as the original models, including similar spectrum efficiency, recharging accessories and networking capability, including Dante on the ULXDD and ULXD4Q dual and quad receivers.

Other accessories include the UA834V in-line amplifier, UA874V active directional antenna and UA860V passive ground-referenced omni-directional antenna. Commenting on the new VHF ULX-D and QLX-D systems, Mike Nagel, product manager for Shure wireless products, said, "Our customers are using more wireless than ever before and available spectrum has become increasingly limited, so we’ve committed ourselves to providing spectrally-efficient solutions. Shure has developed a robust portfolio of products that now includes VHF digital wireless systems, which professionals depend on for user-friendly features and reliable performance." Both systems will become available during the summer.

On the software side Shure has launched version 6.12 of the Wireless Workbench control program. Key among the new features offered by this iteration are logging capability, which allows the system to collect channel status data during operational periods. Other information that can be collected includes RF level, antenna status, audio level, interference areas and battery level. Among new functions are Scan Peak Management and a drag and drop Co-ordinaiton Order that can be customised to alter teh order of frequencies.

In another collaboration Yamaha has announced that its CL and QL mixing consoles have been fitted with the capability to monitor and control the ULX-D digital wireless system. This includes monitoring battery levels, RF reception strength, antenna status and frequency and audio levels. "This integration means that ULX-D users can optimise microphone gain settings from the mix position and confidently monitor the status of wireless systems within the context of the console interface," comments Nick Wood, category director of wireless systems at Shure. "It is a very important step in the progress of wireless control and in the continued collaboration between Shure and Yamaha."