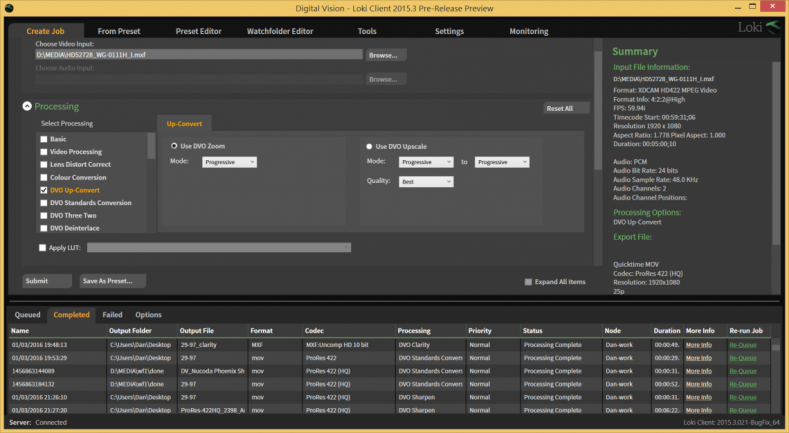 Digital Vision used the recent 2016 NAB Show in Las Vegas to showcase its full range of colour and image management, film scanning and format preparation products. These included the Nucoda grading suite, which now offers support for ACES 10 and Dolby Vision among other formats, plus the Golden Eye 4 scanner and the 2016.1 version of the Loki processing platform.

Loki is Digital Vision's file-based image processor package, which uses a variety of algorithms that can be used for standards and format conversion, noise reduction, repairing faults in digital camera footage and restoration. These tools are aimed at broadcast, post-production and archive applications, with other features for converting frame-rates, up-scaling material and other processing functions.

There is also capability for handling sound, with importing and exporting of files in formats including WAV, MXF and QuickTime Audio. Loki additionally allows operators to preview effects before making a final decision, upload to FTP sites, schedule projects and assemble metadata and analysis information that can be used for making production decisions.

The Nucoda colour grader was shown with its full range of tools, including the DVO suite, plus the Precision and Tangent control panels. There is now upgraded support for graphics processing unit (GPU), in addition to options for working with the Academy Colour Encoding System (ACES) version 1.0 and Dolby's Vision imaging format.