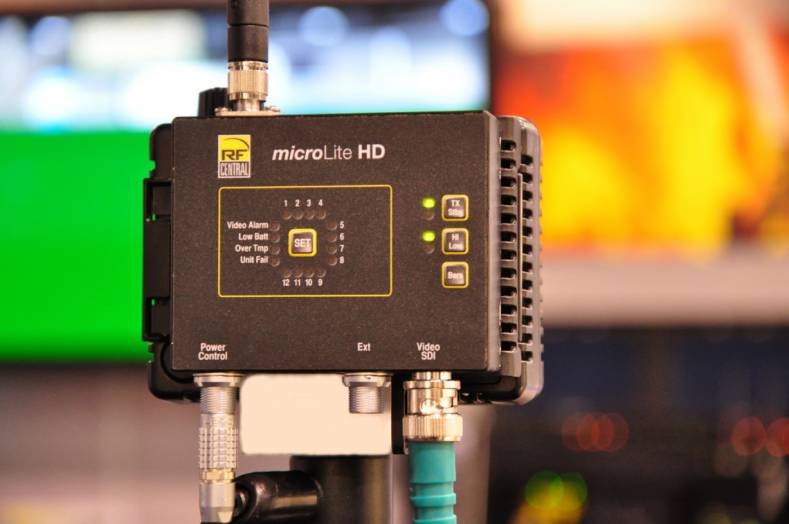 When FOX Sports was laying the groundwork for its coverage of the 115th U.S. Open this past summer; its highest priority was offering viewers unprecedented live aerial coverage of the match at Chambers Bay golf course in Washington State.

Game Creek Video’s The Encore production truck was purpose built for events such as the U.S. Open. It consists of three expandable trailer units that are designed to receive source feeds from 119 cameras and more than 150 replay channels that relied on an Evertz IP-based router. In addition, the overall broadcast required more than 60 miles of fiber, all connected back to the production truck.

With so many source feeds, FOX Sports was faced with trying to create a clear, clean and innovative broadcast that included unique coverage for its viewers without disrupting the fundamental workflow and ease-of-use for the production team. The broadcaster tasked HeliVideo Productions, a provider of FAA-approved cinematography services for television and film, with supplying and operating a low-altitude drone to capture stunning live video across the challenging terrain of the course, including behind sand dunes and sand traps at low altitudes.

HeliVideo’s four-man team came armed with more than $1 million in equipment, including a DJI Spreading Wings 1000 drone flown by a licensed pilot assisted by a visual observer. The UAV enabled tee-to-green overview shots, live shots and record feeds that were intercut into the broadcast creating the unique coverage that FOX Sports desired. 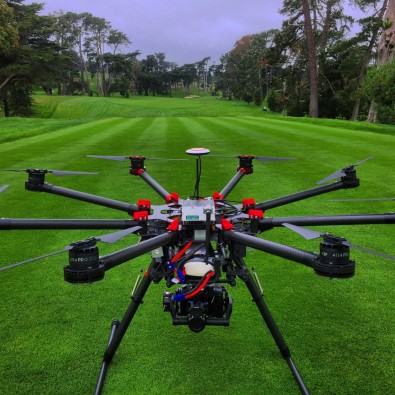 Leading up to the U.S. Open, HeliVideo Productions worked with FOX Sports to prove the feasibility and reliability of the video link technology at several events, including three major golf tournaments and a SuperCross event. The technical requirements needed for the U.S. Open broadcast were established using a variety of equipment in these and other events. For the U.S. Open, FOX Sports wanted UAVs flying over water and down fairways at various altitudes.

FAA guidelines require a UAV to remain at least 500 feet away from the general public, in this case, the fan gallery. This required HeliVideo Productions to establish a clear, safe flying area even though the additional distance often created additional challenges for the wireless link. Because of these guidelines, FOX Sports needed a wireless RF link that was reliable even at long ranges (up to 4500 ft.) and could operate in the presence of high interference.

HeliVideo Productions paired IMT’s DirectVU handheld monitor/receiver with the microLite transmitter throughout the tournament. Direct View is specially designed with user-friendly control panels and a glare-free screen that can be used without a sunshade in bright sunlight, making it perfect for this outdoor application.

In a broadcast of this size, the amount of RF spectrum in use on the course was immense. Operators relied on the DirectVU’s RF scanning ability to be sure they got the best possible signal by selecting a channel that was the most open. Giving the entire crew access to clear channels meant they could always maintain a solid signal and operate without interruption. Before using the microLite system and the DirectVU monitor, HeliVideo Productions had no way to see if there were other frequencies that were causing interference.

In a somewhat unconventional setup, HeliVideo Productions mounted one of the DirectVU monitors to a TV tower. This let the crew “see” the exact signal quality being sent to the production truck. It was another workflow win in a tough signal environment. 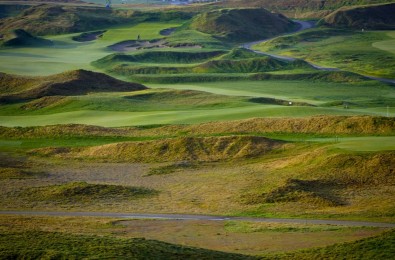 The UAV-sourced video was transmitted via COFDM, which provided reliable links even without line of sight capability at low altitudes.

The HeliVideo Productions team of licensed pilots flew a Panasonic GH4 and a Blackmagic Design 4K camera on two different types of drones, one for recording on the camera and another for the live HD broadcast feeds. Noise from the drone motors was never an issue for golfers and spectators because the majority of shots were captured away from them. The fundamental signal strength of the pictures coming from the microLite ensured a good standoff distance was kept while maintaining reliable video performance.

Used together, the microLite and the DirectVU form a complete, extremely robust transmitter and receiver link. The ability to view footage captured above from a ground position proved invaluable in this particular UAV broadcast application. HeliVideo found the combination was ideal for UAV video operations as it guaranteed that its production team got the shots they needed. The system’s robust COFDM technology makes the transmitter extremely reliable, especially because the drones had to capture video without line of sight capability at various low altitudes. Above all, the resulting extraordinary aerial views gave viewers a truly unique perspective of the event.

Drone coverage of live events is still in its early days. It was just a year ago that HeliVideo became one of a handful of companies to receive a commercial exemption from the FAA to fly drones at live events and for movie or TV productions. As the field of drone photography expands, robust COFDM transmission will certainly make it easier for a production company to comply with FAA rules related to standoff distances.

Broadcasters have been hesitant to use drones for coverage due to an inexact legal framework. But the drone-assisted U.S. Open shoot proved that a modern transmitter and skilled crew can indeed enhance coverage while remaining FAA compliant.