Intercom and networking specialist Riedel Communications launched a new expander unit for its established Smartpanel at the 2016 NAB Show. The ESP-2324 adds more keys to the RSP-2318, plus four high-resolution touch-screens. The company, which is well-known in its European home market as well as the US, is now pushing into Southeast Asia through a partnership with Vietnam-based distributor Vietcoms, with broadcast a particular target sector.

Riedel Communications introduced the RSP-2318 Smartpanel in 2014 as a multifunctional user interface. It offers a choice of networking, with both audio over IP (AoP) in the form of RAVENNA, plus compliance to the AES67 interoperability standard, and AVB (audio video bridge). Working in conjunction with this unit the new ESP-2324 Expansion Smartpanel brings the number of available key switches up to 24 and the total of displays to seven. This is all housed in a 2RU rack unit, with the option of adding up to four expanders using the RSP-2318 intercom app. This would expand a system to accommodate 114 keys and 19 displays.

Commenting on the introduction of the ESP-2324, Jake Dodson, director of product management with Riedel Communications, said, "Our Smartpanel user interface is designed to enable a new degree of flexibility in building the communications solutions that professional production and broadcast operations require and the new ESP-2324 Expansion Smartpanel very simply adds further versatility and scalability to this system." 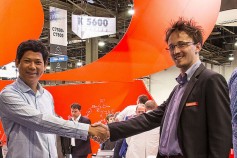 Khang Do (left), president of Vietcoms, shakes on the new partnership with Cameron O´Neill of Riedel Communications

Riedel also recently announced that it is working with Vietcoms, a Hanoi-based systems integrator and distributor, to handle its product ranges in Vietnam. Trading since 2005, Vietcoms works with many broadcasters and Pay TV services in the country, including national broadcaster VTV, VTC and Viettel. Among the systems it will be handling are the Artist digital matrix intercom, the Acrobat digital wireless system and the MediorNet media networking package.

"Vietnam is a new and exciting market for Riedel and we're confident that our new partnership with Vietcoms will accelerate the implementation of our products across the region," commented Cameron O'Neill, director for the Asia-Pacific region with Riedel Communications.