DNF Controls invited attendees to ‘push their buttons’ during their 26th year as an NAB Show exhibitor.

At the 2016 NAB Show, DNF Controls demonstrated a wide spectrum of solutions designed to meet real-world needs of broadcast, content creation / distribution and ProAV customers. The company introduced several new products and made some significant announcements at the Show.

“This is our 26th year as an NAB exhibitor,” says Dan Fogel, chief technology officer of DNF Controls. “We’ve seen lots of changes and continue to develop solutions with our customers to address their specific needs in this dynamic industry. This NAB is no different ... we’re introducing a variety of new and enhanced products to give them a competitive edge." 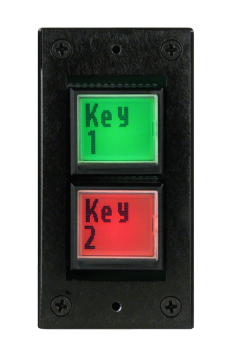 A 2-button IP Control Buddy can remotely control commands such as switcher effects.

IP Control Buddy is a new go-to solution for managing device control and messaging. It features programmer-free webpage configuration and is available in both GPI/O and LCD pushbutton models. A single button press can be used to activate a GPI/O, transmit a serial command, or send an Ethernet-based TCP/UDP/SNMP/HTTP message. It can also convert one GPI Input into multiple GPI Outputs or multiple GPI Inputs to a single Output.

USP3 is the next-generation of DNF's widely-used Universal Switch Panel with Ethernet, RS232/422 serial and GPI/O-capable. It offers a streamlined user interface, single panel monitoring and control of multiple devices, GPO, serial or Ethernet messaging, and more. Its programmer-free webpage set-up enables users to create task-specific control interfaces for the most complex scenarios; in addition, users can store multiple configurations and replicate them to other local or remote USP systems.

The versatility of the AIB-4 includes multiple command structures.

DNF in Other Exhibits

Shading multiple cameras, especially during fast-paced news coverage, is an intense, two-handed operation. Shifting focus from the controls to switch a router is a distraction. Recalling successful outcomes on other projects, CNN turned to DNF Controls for a one button-press solution. Using DNF’s GTP-32 Control Processor, a signal from the Sony panel triggers the correct router crosspoint, instantly sending that camera’s video to the shading monitor.

“Turner encourages workplace innovation, and I was happy that together with DNF, we were able to develop a solution that eases operational workflow,” said Terry York, the CNN field engineer who worked directly with DNF’s Dan Fogel. “We're looking for opportunities to use this set-up across the organization," he added.

DNF Controls and IHSE USA, announced a partnership to develop the world’s first Programmable pushbutton panel exclusively designed for IHSE KVM matrix switching. The new USP3 is a sixteen button remote control panel that can be used to quickly recall IHSE KVM presets. It is designed specifically to operate via IHSE’s API network interface for the Draco tera compact and Draco tera enterprise matrix switch products. The product interface module will only be available through IHSE USA and IHSE GmbH.