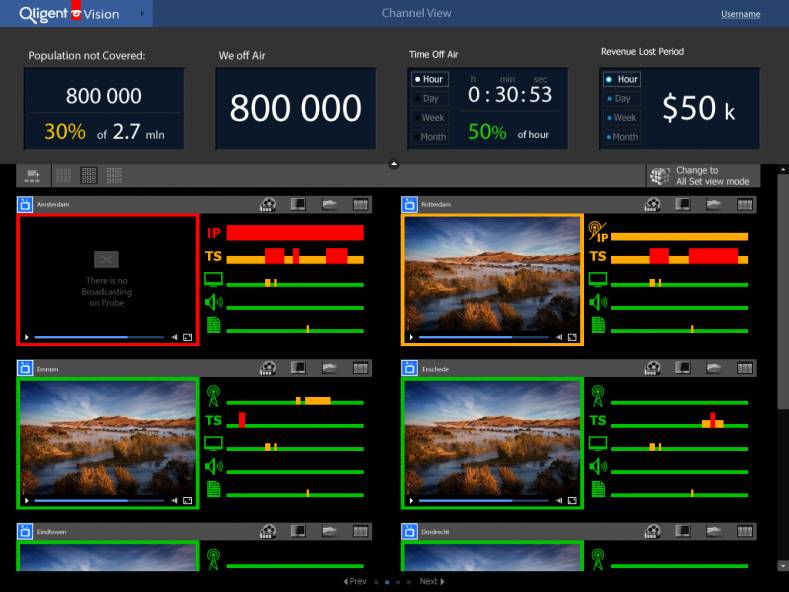 The Qligent Vision system gives broadcasters a better understanding of the ratio of local ads in the on-air schedule.

Engineers from Tecom Group relied on Qligent monitoring technology to check some 20 Russian federal TV channels of the first and second DVB-T2 multiplexes to analyze the presence of SCTE-35 markers in their digital transport streams. The research was conducted April and revealed that 9 of 20 monitored Russian TV channels have inserted SCTE-35 PID in their transport streams and 5 out of the 9 TV channels are carrying CUE- IN/OUT splice events.

Tecom Group representatives said that local ad insertion has been a pressing issue for some time as digital TV has been developing rapidly in eastern Europe and Russia, leading to the significant audience growth. Regional advertisers are becoming more interested in cooperating with federal TV channels, which still remain their main source of income. However, local ads are currently inserted in the analog streams only.

As a solution to this problem, SCTE-35 standard has been developed. Along with the main signal, an additional packet identifier (PID) formed by specific MPEG coders is delivered. This allows identifying the CUE- IN/OUT splice events with high precision and ensures confidentiality and protection from unauthorized use of air. It also can happen that local broadcasting partners go beyond their scope of ad time at the expense of federal ad scheduling. Automating local ad insertion workflows can also solve this problem.

SCTE-35 markers are intended to ensure smooth and frame-accurate automated local ad insertion into the digital transport stream—where previously they were inserted into analog streams—and they also provide supportive information to allow local next generation broadcasting systems to inset ads into the transport streams of multiplexes on the federal level.

However, the company said, users can’t ignore the fact that the presence of SCTE-35 markers in broadcasting does not indicate that they can be inserted in the transport stream which is managed by splicers, as, after being used, these markers can be switched off by the very same systems.

The research was initiated by Tecom Group itself and carried out with the help of Qligent Vision system, the product developed by Tecom Group’s partner company. Qligent's capability to analyze SCTE-35 markers allows a clearer understanding of the ratio of local ads in the on-air schedule. It also enables TV broadcasters to provide advertisers with visual reports.