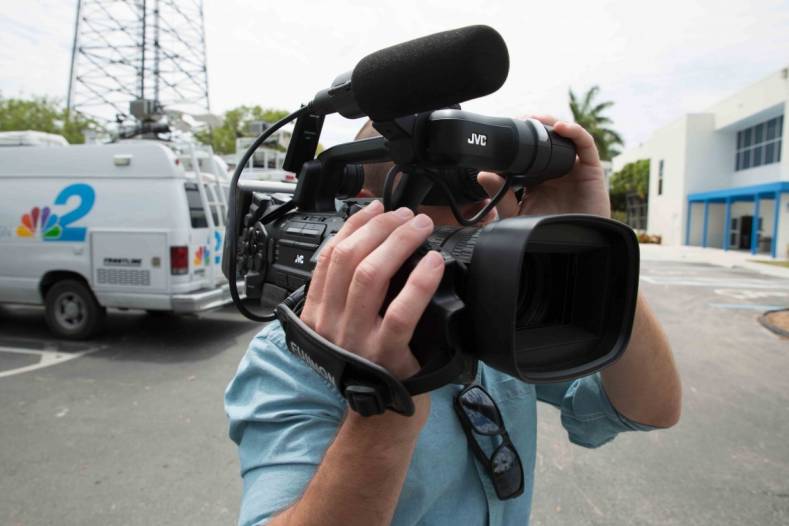 The new JVC GY-HM660 cameras will be used for Waterman’s multimedia journalists to expand its ENG activities across several stations.

As part of a continued effort to improve its newsgathering activities, get news to viewers faster and improve its on-air look, Waterman Broadcasting, based in Fort Myers, Fla., is equipping its ENG crews with new 33 GY-HM890 and 11 GY-HM660 cameras from JVC Professional Video. The new JVC ProHD series cameras will be used for the co-located news operations of WBBH -TV (NBC) and WZVN-TV (ABC), which produce 14 hours of local news per day in Fort Myers-Naples.

Waterman has also purchased a JVC BR-800 ProHD Broadcaster, a specialized IP signal management server made in partnership by a company called Zixi, to support live video-over-IP ENG reports from the field. The Broadcaster server can receive and manage input streams from multiple cameras.

Dan Billings, Waterman Broadcasting director of technical services, said the stations will use a majority of the new JVC cameras for newsgathering and live field reports. He added that now every field camera will have the capability to supplement their current bonded cellular solutions. The new cameras represent Waterman’s third major investment in JVC ProHD cameras.

The new GY-HM660s will be used for Waterman’s multimedia journalists (MMJs). Introduced last month, the GY-HM660 is the industry’s first camera with an integrated IFB audio channel and video-over-IP capabilities, which allow reporters in the field to communicate with the studio while simultaneously delivering live HD reports. Billings said the new GY-HM660s will replace and expand MMJ camera resources, while the GY-HM890s not assigned to the field will be used in the studio.