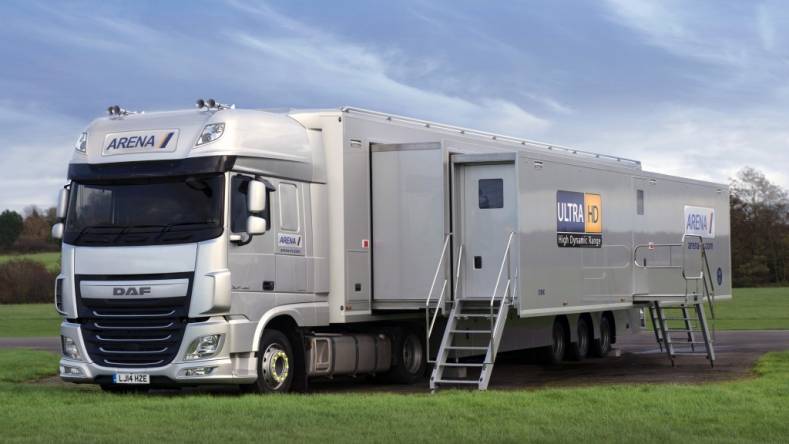 Arena Television will roll three new triple-expando production vehicles in the next three years to help it achieve its lofty SDI-to IP goal.

Looking to get ahead of the much-hyped SDI-to-IP video delivery migration wave that looks sure to be widespread in (most experts say) approximately five years, a UK-based outside broadcast services company called Arena Television is designing three new 4k (UHD)-capable OB vans that it says will give its clients far more flexibility in the way they handle video sources. High dynamic range (HDR) image acquisition will also be part of the complimentary mix.

Arena Television, said it plans to roll out the new triple-expando production vehicles in the next three years with the help of Grass Valley to help it achieve its lofty goal. It’s one of the first OB companies in Europe to embrace 4K UHD production based on an IP infrastructure in a broadcast truck. The new trucks are being built by coachbuilder ASCB and Arena is working with systems integrator Videlio to design and outfit them.

“We believe that basing our infrastructure on emerging technology will deliver the most powerful and advanced OB trucks in the world, capable of providing the service and flexibility customers will be expecting and demanding in the coming years,” said Richard Yeowart, group managing director of Arena. "For us, the key to success in this project was partnering with a company that provides a breadth of IP solutions and understands the need to maintain the high level of production capabilities that our clients have come to expect.”

A family-owned company since 1989, Arena Television operates a fleet of more than 20 fully equipped OB trucks. As part of the new deal, Grass Valley will supply the key product solutions in the three planned trucks, OBX, OBY and OBZ. The company said its new OBX is the first truck to be equipped with this new technology — which could include new e-license upgradeable Grass Valley LDX Series cameras with an IP interface on the camera in the future — and will hit the road this summer. The second truck, OBY, is due later in 2016 and OBZ will follow in 2017.

With the help of Grass Valley, Arena TV will deploy a complete SDI-to-IP live production workflow in the field.

As the first of the new fleet, OBX is designed to support 32 camera productions and utilize end-to-end IP connectivity. The design is based around a Cisco IP switch, of which the core infrastructure is fiber, running 10GigE and where enabled, 40GigE. The architecture provides the ultimate production flexibility where existing baseband systems can seamlessly integrate with the new IP-enabled workflows. In addition, OBX is fully capable of adopting greater network speeds as they become available.

At launch, the IP workflow will utilize the SPMTE ST 2022-6 protocol and is designed to take advantage of emerging video and audio IP standards such as VSF TR03/04, which Grass Valley is supporting through the industry-aide AIMS initiative. Arena Television said it is running 4K UHD over 10GigE with Grass Valley’s 4K one-Wire solution that uses TICO compression. In addition to leveraging open standards, OBX is also “future ready” with regard to formats, with its ability to accommodate emerging formats such as HDR. Arena’s Yeowart also said OBX will run UHD 2Si, which provides benefits in resilience and monitoring for client confidence, and is able to integrate Quad-Link if required. 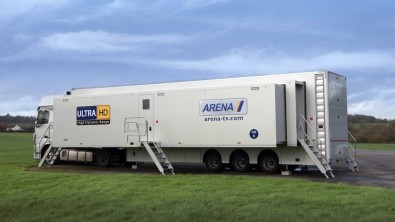 As the first of the new fleet, OBX is designed to support 32 camera productions and utilize end-to-end IP connectivity.

Latency and timing are critical in live productions and Grass Valley’s awareness of the end-to-end production requirements, careful system design, adoption of technologies and targeted research and development in products such as GV Node for low latency and vertically accurate switching, will contribute to the three new OB vans and give Arena clients the production facilities they demand today, with flexibility to develop their productions in the future.

[Of note: at the recent 2016 NAB Show, Grass Valley, and Cisco collaborated on a live demonstration of Grass Valley's remote IP production workflow, that illustrated both companies’ vision for leveraging SMPTE 2022-6.

From the Cisco booth, the new Grass Valley LDX 86 WorldCam camera with XCU HD/4K XF IP base station was shown sending a 3G SMPTE 2022-6 signal through two Cisco switches across a 10 GigE link between the North and South Halls of the Las Vegas Convention Center. Grass Valley's NVision 8500 IP Gateway router and Kaleido multiviewer were also shown at the Cisco booth with access to sources, including cameras, from the Grass Valley booth. In addition, multiple Cisco Nexus 7000 and 3000 Series switches were leveraged in the Grass Valley booth, both live in the engine room and in the theater area.]