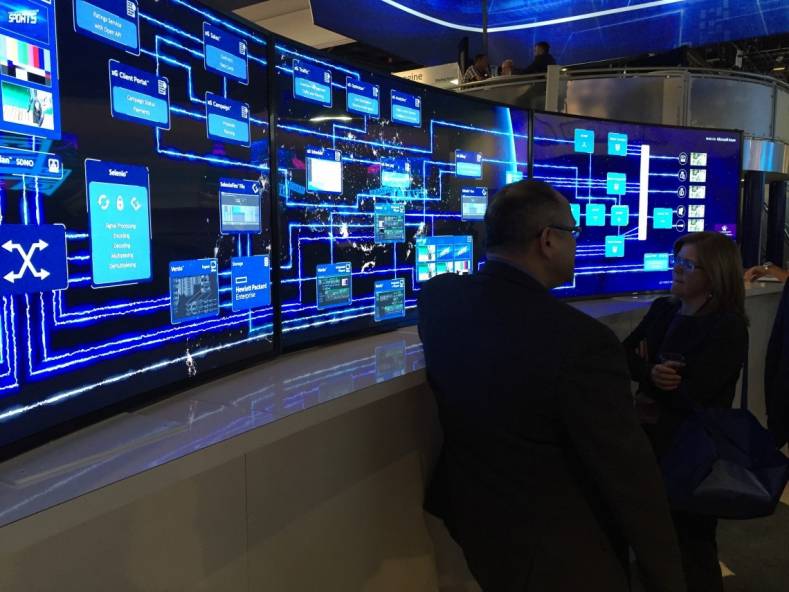 As legacy automation systems reach end-of-life, broadcasters and multi-channel originators want to take advantage of the flexibility and power of centralized, software-based automation systems. Many are concerned about migrating years of accumulated data from their legacy system database to a new automation system. Most CiaB manufacturers have addressed this critical issue.

At the 2016 NAB Show, the trend towards CiaB was clear. Customer interest and sales were growing for both SDI video and IP video or combinations of both. Some new CiaB solutions use the cloud. The exhibitors below displayed and demonstrated many useful new CiaB solutions.

Athensa announced AirBox 7, TitleBox 7 and CaptureBox 7. Established solutions form the core of this CiaB, and it takes the user experience to another level.Focused on visual enhancements, supported by solid technology performance, ATHENSA offers solutions that allow full user-defined look for any broadcast environment. 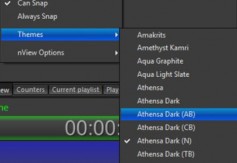 The new Athensa UI is adjustable.

Axel Technologies displayed XTV Suite, a professional complete set of software tools for TV stations to manage video capture, trimming, scheduling and playout for completely automatic and unattended efficiency. The tools are designed to achieve a true 'universal format' compatibility and provide a powerful tool to virtually play all media formats from any source or feed. 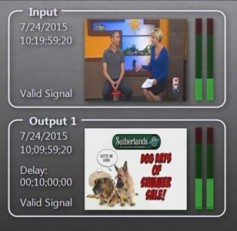 ARMADA’s simple UI shows a proxy with VU meters for inputs and outputs.

The ARMADA Time Delay Server is intended for fully automated operation with no user intervention and saves on time and eliminates human error. The ARMADA Server and the associated Time Delay application is contained on one device. There is no need for a separate control PC.

The ARMADA Time Delay Server takes live inputs from SD-SDI, HD-SDI or IP and, provides SD-SDI, HD-SDI or IP outputs. With the option “DELAY-OUT” the system can play multiple time delay outputs from the same input and each output can have the same or different delay periods. It is available in 3RU as standard or 1RU. 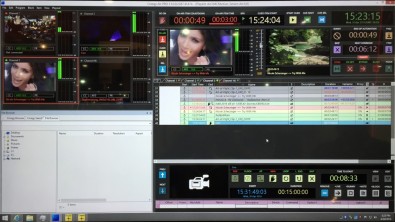 AirPRO Version 11 was demonstrated in the Cinegy exhibit.

It also sports Cinegy’s next-generation of in-built channel branding, which works in a cloud or virtual environment. This makes it easy to control multiple channels that air the same content but require regionalized commercials and branding.

Existing Cinegy Air users with a valid service level agreement can upgrade to Version 11 at no charge.

Software as a Service

The company also announced “Cinegy as a Service”, a hardware-free way of enabling users to deploy software-defined television on cloud-based virtual machines.

All of Cinegy’s software technology, starting with Cinegy’s real-time playout server and broadcast automation software, Cinegy Air, will steadily migrate to cloud-based services such as Amazon Web Services (AWS), enabling prospective users to spin up, test drive, and, if they choose, deploy Cinegy technology in an HD or 4K cloud. 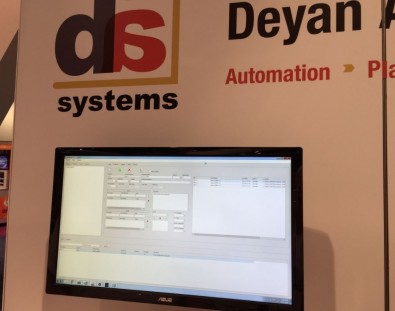 Deyan services include consulting and development of custom broadcast automation software and hardware solutions. The On-line Master Control Room package from Deyan Automation Systems is opening the MCR to the Internet and its unlimited set of possibilities. 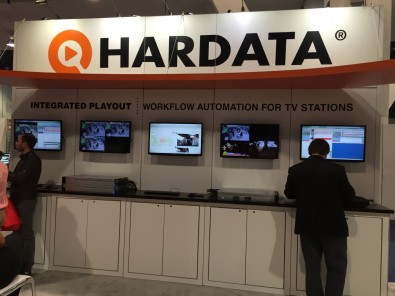 All HARDATA systems are based on software modules developed entirely by Hardata, that integrate with enterprise-grade hardware specially adapted by Dell. 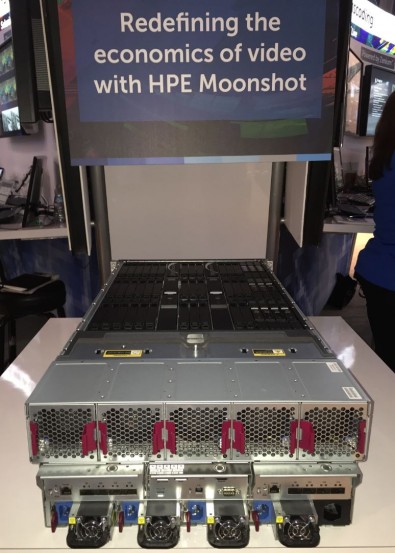 Versio:The 100%-software, cloud-enabled Versio solution is now available in the virtualized Azure environment. It includes graphics, automation and master control. Media companies can now use the combined flexibility of Versio and Azure for a variety of revenue-enhancing and cost-reducing applications.

Leightronix announced a new product built on the success of the popular UltraNEXUS series of video servers, the UltraNEXUS-HD. It combines high-definition video with the well-known WinLGX scheduling program, offering an accessible and affordable gateway to HD broadcasting. Also available is the UltraNEXUS-HD Blade, a specialized, space-saving system, accommodating 12 High-Definition channels in a 4 RU chassis.

Pebble Beach Systems' Orca is a virtualized CiaB that makes it easy to deploy IP-based channels almost instantly without significant additional hardware or weeks or months of setup and provisioning.

Orca channels run in a virtual machine (VM) in a private cloud with IP inputs and outputs. The virtual CiaB delivers all the functionalities that could previously only be handled by discrete hardware video servers, graphics and captioning systems, within a pure software environment.

"While systems offering integrated software components running on off-the-shelf IT hardware have been gaining in popularity, pushing the infrastructure to the cloud is truly the next step, as broadcast businesses seek to evolve IP-based services alongside more traditional channel delivery methods,” said Ian Cockett, Technical Director of Pebble Beach Systems.

Orca offers a software-only virtual implementation of the company’s Dolphin platform. Because both Dolphin and Orca share the same underlying architecture and control, it is easy to mirror channel templates for simultaneous playout to traditional SDI and IP video channels.

A real game changer is Orca’s ability to create new IP channels from a series of templates at the touch of a button. Channels can be launched and integrated into a running Marina automation system literally at the click of a button. The solution can also deploy grid-based GPU power for encoding and graphics, freeing up CPU power to enable Orca to increase channel counts more cost-effectively for the end user.

Pixel Power provided a live demonstration of fully virtualized playout in the cloud, along with highly productive graphics solutions and proven technology that bridges the transition from SDI to the IP connected future. 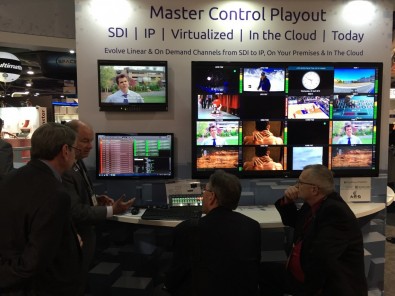 New solutions were on display in the Pixel Power exhibit.

The 2016 NAB Show was the site of the US debut of StreamMaster, the next generation of integrated channel playout, scalable to meet the needs of anything from a pop-up channel to a full premium service. StreamMaster is part of Pixel Power’s new software-centric product portfolio; it can run on dedicated hardware, as a virtual machine in a data center, or in the cloud. 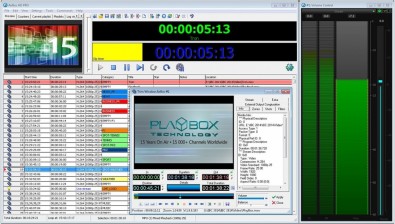 PlayBox Technology Limited showed its CloudAir platform. It enables new television channels to be set-up and established in a matter of seconds, without the usual preliminary investment in playout infrastructure. CloudAir is designed for those wanting to broadcast TV content on a real-time 24/7 basis, or for a short-running series such as a sports event. It can also be deployed as the basis of a highly secure disaster recovery system.

Software as a Service

CloudAir is about speed, unlimited scalability and affordability. It has the potential to empower new or existing program streams wherever and whenever they are needed, in any video standard from SD to UHD. Available on a software-as-a-service basis, it offers established broadcasters or new-start entrepreneurs unsurpassed freedom in the style and scale of their operation and in the way they fund their business. CloudAir can provide true playout with graphics on any enterprise-class blade, rack or tower server. CloudAir needs no auxiliary hardware.

PlayBox also showed the latest upgrades to the established PlayBox platform: AirBox Neo, TitleBox Neo, CaptureBox Neo and SafeBox Neo. These can be combined on a modular basis to match any size of operation ranging from a compact national or regional channel-in-a-box station to a large-scale multi-channel broadcast network transmitting to a global audience.


Earlier this year, SAM inked a deal with Rogers Media to provide it with a range of leading technology for its new, market-defining 4K service. The announced programming package to be delivered includes over 100 live sports events, featuring every Toronto Blue Jays baseball home game and more than 20 NHL games. SAM provided a Kahuna 9600 switcher – featuring a 16 input A/B cut buss — for the MCR alongside Morpheus automation and ICE Channel-in-a-Box units. Rogers Media has also installed main and backup 4K sQ servers in addition to a range of SAM infrastructure products. This project marks the most comprehensive rollout of SAM 4K technology to date.

Vector 3 displayed and demonstrated VectorBox. It offers simultaneous ingest and playout with graphics from a single chassis and adds versatility and reliability to the channel-in-a-box solution to new heights.

VectorBox is the standard of quality for channels wanting a cost-effective solution for their playout. Besides automating playout, VectorBox generates live graphics to enable full channel branding. Integral use of XML for all metadata guarantees compatibility with any database or file system. VectorBox XL, VectorBox 8000HD, VectorBox LT, and VectorBox 6000 are all available in various configurations.

All the CiaB exhibitors we talked with agreed CaiB interest at the 2016 NAB Show was stronger than previous years.