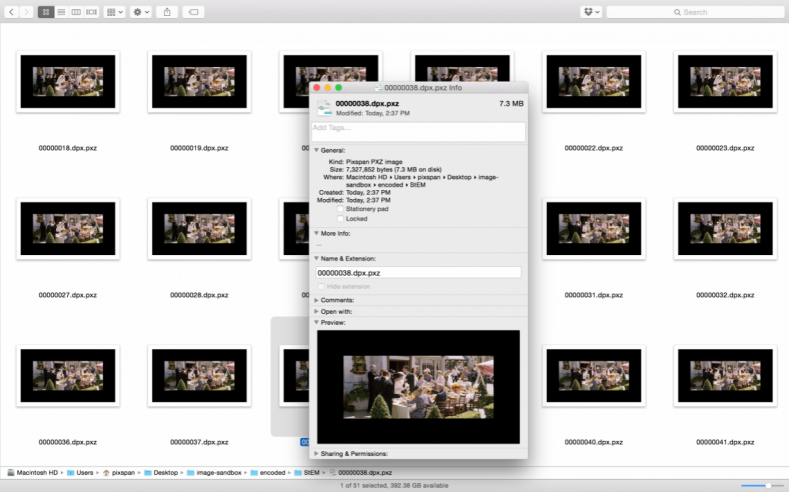 Pixspan software gained attention at NAB by enabling EMC, Nvidia and Aspera to integrate and offer a real-time, 4K full resolution workflow on a hardware infrastructure designed for 2K.

Pixspan compresses the files in what it describes as a bit-exact round trip way. So, users need less storage, and it moves faster across Aspera because the files are smaller (using less bandwidth) and it opens/closes image files at workstations faster, thanks to NVIDIA GPU power.

Hollywood is in the process of transitioning from 2K to 4K (a quadrupling of size), while camera manufacturers are beginning to release even higher resolution cameras. High Frame Rate (HFR) and High Dynamic Range (HDR) formats are additional multipliers on the footprint of a project, leading to significant cost increases and challenges in data handling and transmission times. The entire digital workflow is impacted by the increasing size of media, from set to post, to development sharing, to delivery of masters to the studio.

While throwing hardware at the problem might work (e.g., upgrading an organization's LAN infrastructure to 40GbE), it can get prohibitively expensive.

According to Pixspan what’s needed is a method of reducing the footprint of high-resolution media (both in terms of storage and network bandwidth requirements), with no loss in resolution, and without breaking the bank.

At NAB, the software was shown working on Dell EMC Isilon storage. “Media transfer speed to/ from consolidated storage is accelerated, reducing the amount of hardware required to support workflow throughput requirements,” says the firm. “In addition, more data streams can be simultaneously supported from Isilon storage, giving effects specialists and editors the capability of presenting more and varied media sequences to their producer. An artist can play 4K media in real-time, add layers, work on color correction, and perform every other step in the VFX workflow natively but with greatly reduced infrastructure requirements.”

Pixspan's solution is based on its Bit Exact intra-frame-based Compression Solution technology. This compresses an image into a smaller representation of the original, while retaining “absolutely all the information” from the original image. That means that the representation can subsequently be decompressed back to an image, and the rehydrated image is a bit-for-bit exact replica of the original.