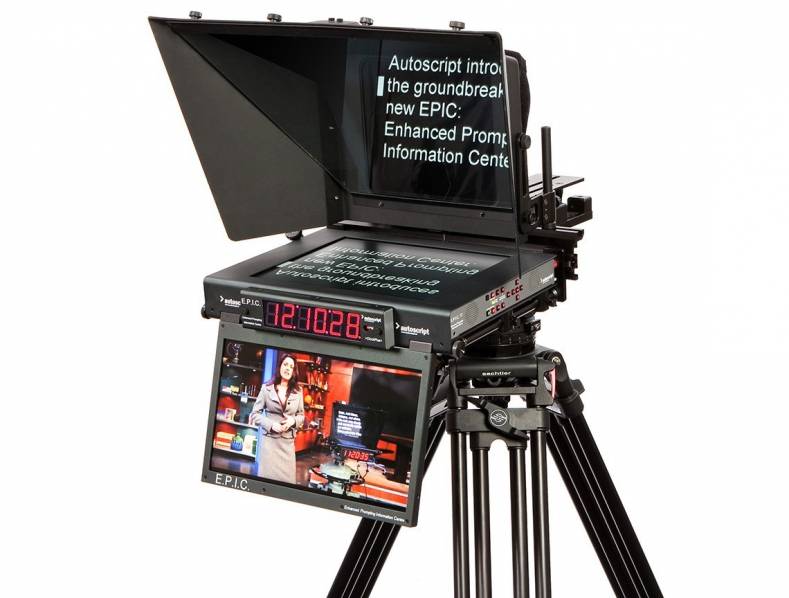 Autoscript will use the IBC2014 Show (stand 11.E55) to spotlight is wide range of prompting solutions, which have helped broadcasters and production professionals get the job done faster and with better efficiency.

Among the highlights of Autoscript’s IBC exhibit stand are the WinPlus Remote, alongside the latest addition to Autoscript’s ground-breaking Enhanced Prompting Information Centre, E.P.I.C. 19”, which will make its debut at this year’s event. The E.P.I.C. 19-inch unit combines a high bright LED backlit screen and super thin talent monitor to deliver crisp and clear images to talent in a simple, integrated package, without the need for additional mounting brackets or cables. The system is ideal for use in large studio environments and features dual SDI inputs as standard and an integrated tally light.

This year marks 30 years in the business for Autoscript, which manufactures and provides teleprompters to TV and film production companies around the globe. Established in 1984, the company has shipped more than 9,000 software systems, and many more on-camera teleprompter units since its solutions were introduced to the market three decades ago. The company’s professional teleprompting equipment is now installed in studios and newsrooms around the world, and also used for conferences, presentations and on location.

Autoscript products are much more than just electronic cue cards. The solutions provide complete scripts together with an increasing number of innovative features, designed to make the life of every user as stress free as possible. A prime example of this is Autoscript’s renowned E.P.I.C. (Enhanced Prompting Information Centre), an all-in-one prompter display and on-air talent monitor that vastly simplifies studio equipment, reduces power consumption and enables easier location prompting.

Historically, one of the biggest breakthrough systems from Autoscript was its first digital prompter, Simplicity 2, a pre-DOS dedicated machine that provided dual screen editing. This was the first device to be integrated into electronic newsrooms, and ran news prompting interfaced to Basys at both the BBC and ITN for many years. Then, when Microsoft’s Windows game-changing software was first introduced, it gave rise to the development of what went on to be the world’s best-selling digital prompter - the WinPlus range of Autoscript prompters.

Fast forward to this landmark year and Autoscript, part of Vitec Videocom, a Vitec Group company, launched its WinPlus Remote, an iOS-based teleprompting system that delivers up-to-date scripts to users in the field, anywhere in the world. WinPlus Remote is installed on a networked PC in production facilities and enables the script to be automatically uploaded to an FTP site where it can be downloaded onto an iPad by talent in the field and kept constantly updated. As a result, the latest version of the script can be seen by journalists on location, as well as in the studio.