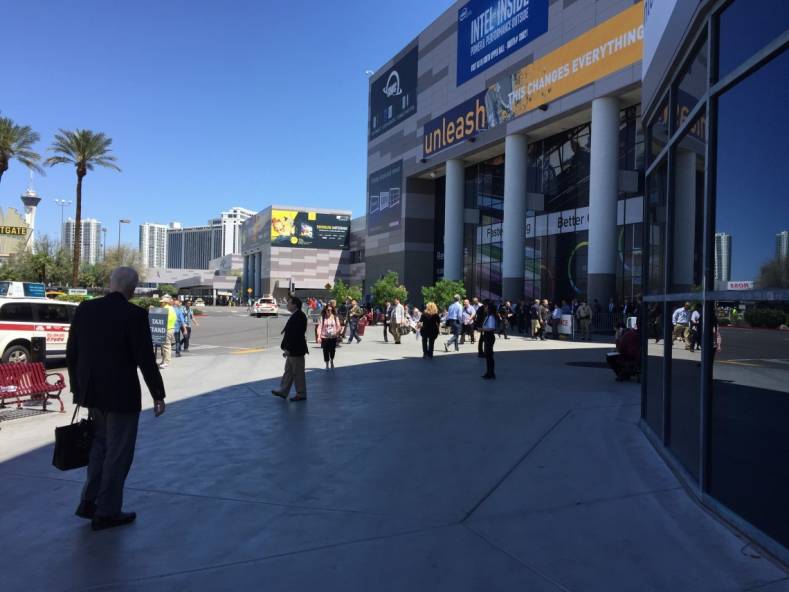 “I can’t wait to go back to my hotel and get on the treadmill,” said no NAB exhibits visitor ever.

Where else but the NAB Show can 103,000 people from virtually all cultures and continents gather, rub elbows and talk about television amicably. Visitors were challenged by more than a million square feet of exhibits from 1874 companies, open for only 31 hours. Nobody could possibly see it all.

Like the NAB exhibits, no single article can possibly cover the whole show. This story is the overview of one person who toured about 90 exhibits, attended numerous meetings and press conferences, and also came prepared to buy some new production gear.

"Upbeat" would be the one word best describing the 2016 NAB Show. It was recovering from last year’s analysis paralysis of uncertainties in UHD and 4K, IP and IP alliances, ATSC 3.0 questions and rumors, wireless trends and FCC channel repack. This year, those issues were the talk of the show. Not all questions were answered, but visitors and exhibitors had gained much insight into these subjects after the 2015 NAB Show and seemed more comfortable dealing with them.

The buzz through exhibit halls and press conferences was about the future of TV according to the ATSC: 4K UHD with subchannels, targeted advertising and other IP services over ATSC 3.0 redistributed by a Wi-Fi IP gateway in the home. Other prognostication hotbeds were IP and alliances, and all things RF and wireless.

Reality check: If you believe everything you see and hear at a NAB Show, I’ve got a deal on some 3D TVs for you. Accurate predictions at NAB Shows can be as rare as a roll of quarters in a 'Vegas casino. Las Vegas and TV broadcasting are changing as fast as its winners and losers can place their bets.

There will always be a need for extreme “drill-down” resolution imaging for medical, military, security and large format print jobs, but do consumer TVs really need more pixels? More pixels sounds better but who will see them? The ability of imaging devices, computers and displays to handle high frame-rate, high-resolution, progressive-scanned video has surpassed the natural limits of human eyesight. Has the resolution revolution been resolved? 16K was a NAB Show no-show. 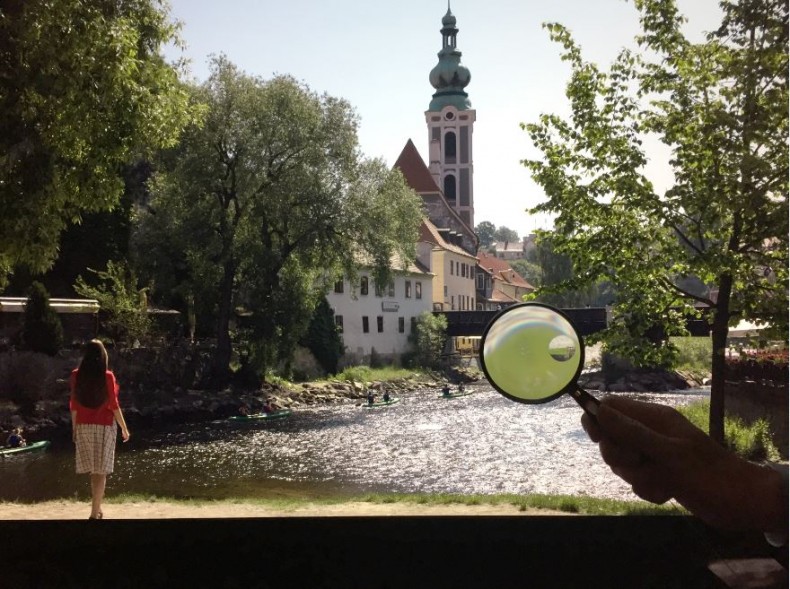 One clue that we’ve hit the resolution wall was a magnifying glass hanging next to a prototype Canon 8K display.

Steve Jobs recognized the relationship between display pixels and human eye limits. The resolution of an Apple Retina Display is determined by the size-independent point on a computer monitor or mobile device display when more pixels won’t be seen at normal viewing distances. "Retina" is Apple's registered trademark for computer equipment. It is often defined as pixels per degree (PPD). A narrow one-degree triangle with leg heights equal to the viewing distance will achieve Apple Retina threshold at a base width of 57 pixels. That's the point where you won't see more pixels in the same space but you will notice fewer.

Super-resolution television formats such as 4K, UHD and 8K challenge eyeballs and domestic viewing habits. The generically agreed upon optimum viewing distance for a 1920x1080 50-inch display is approximately 2x the diagonal screen size, or about 8’. Optimum 4K peaks at 1x diagonal size, and 8K looks best at 0.5x diagonal size. To see all 33 million pixels of 8K, the eye must be 2’ from a 50-inch screen, or 4’ from a 100-inch screen, thus the magnifying glass next to the Canon 8K display. Is a closet the new living room?

The tone of conversation in exhibits included debate about 4K broadcasting being a practical use of broadcast bandwidth. Some think HDTV with HDR will gain traction sooner. It is more visually impressive than 4K at comfortable viewing distances and barely uses more bandwidth. Some are saying 4K may sizzle then fizzle like 3D TV. Who knows, its Las Vegas. Place your bets.

Leading off the opening day of exhibits was a press conference in the ATSC 3.0 Consumer Experience Pavilion. The Pavilion housed a variety of gear from various manufacturers, including signal analyzers, multiplexers, transmission equipment for HDR content, encoders for Single Frequency Network (SFN) transmissions, audio encoders, watermarking software and Interactive TV. I saw some occasional digital artifacts on some screens, but in all fairness, most of the technology involved was prototype, and the “standard” is still a “candidate standard.” 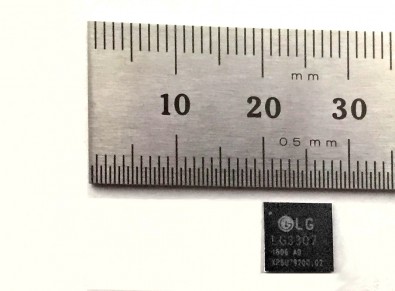 TV manufacturers are anxious for ATSC 3.0 to move from candidate standard to industry standard to commence manufacturing receivers.

Important to many broadcasters was the announcement that UHD and existing subchannels can co-exist in an ATSC 3.0 stream, and the number of potential simultaneous HDTV streams on an ATSC 3.0 channel is increasing with the technology. ATSC 3.0’s advanced emergency alerting was also on display.

ATSC 3.0 has all sorts of great things going for it except for a mandated transition plan. There isn't one. The concept of one station in each market becoming a legacy ATSC 1.0 “Lighthouse Station” during the transition to ATSC 3.0 was discussed at length, with great hopes. I haven't heard a Plan B.

There were many amazing new wireless products designed for broadcast news and field production. Leading the pack of ideas as useful as they are clever was the Panasonic P2 Cast. It debuted at the 2016 NAB Show, although P2 Cast was available in the US and Europe on a free trial basis last summer. The system takes full advantage of the network features of P2HD camcorders with AVC-ULTRA recording including the AJ-PX5000G, AJ-PX800 and AJ-PX270. It sets a workflow trend others are sure to follow. 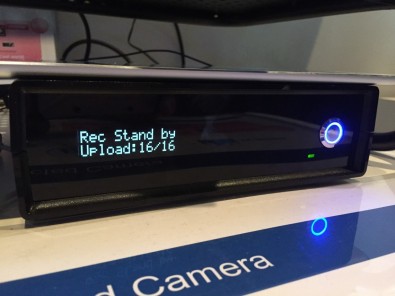 Panasonic displayed a mock-up of a P2 Cast gateway device with a HDMI or HD-SDI input to allow legacy or non-Panasonic devices to interface into P2 Cast.

P2 Cast expands the editing function to any device connected to the Internet. It uses the cloud to move low bit rate, yet high-quality proxy video off a camcorder, create a sequence of the desired clips, and then automatically pull high-resolution AVC-ULTRA video clips directly from the camera.

Producers in the newsroom can see video as it is recorded and the proxy is good enough to air in fast breaking stories. The device can be set to feed a proxy when recording or actually feed camera video continuously when powered-up. It also includes GPS tracking.

The mission of TV broadcasting in the US has historically been to entertain and inform the viewing audience for the greater good. Not everyone attending the 2016 NAB Show was on that page. Some visitors were using low entry prices and the persuasiveness of the medium to accomplish exactly the opposite. It's all television, but its not always good.

Some visitors considered of TV to be pure data. Others were there to see the latest clandestine wireless closed-circuit observation and recording gear. Those two groups without call letters help pay for expensive R&D that trickles down the market. The Las Vegas Convention Center is a big tent with plenty of room for everyone, right after they pass by the Las Vegas Police K9s at the front doors. The K9s were a NAB first that made everyone more comfortable.

Another first at any NAB Show, in an exhibit that shall be nameless, was something that made me distinctly uncomfortable. It was a new TV product with “censorship” features. Digital delays are common in talk radio, but a full-on TV censorship device was new to me. It was a faux-live delay device meant not for just profanity. It allows the operator to cut, mask or bleep sound and/or video, complete with a live airbrush and movable defocus rectangle, done on the fly moments before the content airs as "live." In 2016 there's a market for that. I didn't ask what happens to operators who can't keep up.

Propaganda and Censorship was a required course I took years ago in Journalism School. At the time, I thought I’d never have to deal with either one. I was wrong.