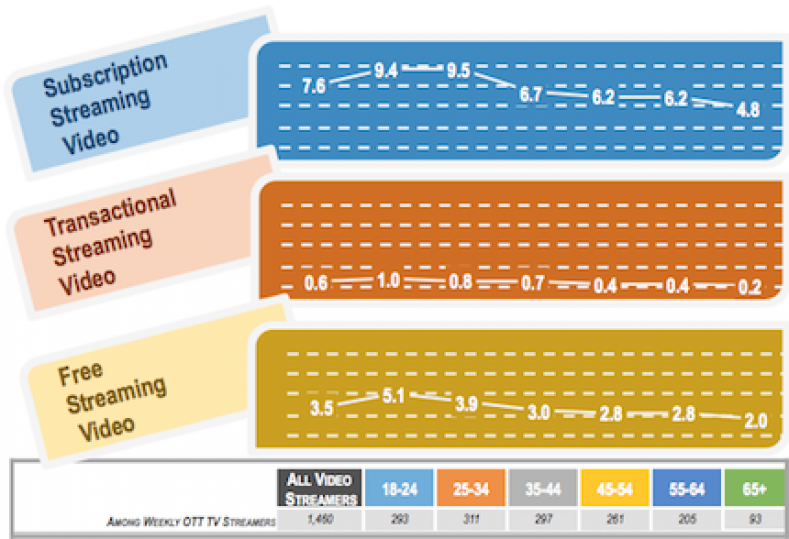 Consumers in the US now spend 42% of their main screen TV time viewing OTT services with almost two thirds of that being subscription video-on-demand (SVOD), according to research just published by Adobe in conjunction with The Diffusion Group (TDG). The remaining OTT time is split between free streaming services (FVOD) at 30% and transactional streaming services (TVOD) at 5%.

These figures do not include time spent watching TV on connected devices such as tablets, laptops and smart phones. When that is taken into account almost certainly more than 50% of all viewing time is now spent on OTT, depending on which survey is taken. Outside the US the OTT time is often less, depending on various factors including quality of broadband infrastructure, but the broad trend of growth is fairly ubiquitous. The results obtained by Adobe and TDG highlight how while OTT has had little impact on hours spent viewing the big screen, it is taking a growing proportion of that away from scheduled programming.

In the SVoD category Netflix is still dominant, accounting for 70% of the adult viewing, followed by Amazon Prime at 33% and then Hulu Plus at 21%, bearing in mind that the total in each group is well over 100% because some people subscribe to two or more of the options. For SVoD the total is 165%.

For FVoD You Tube is even more dominant, accounting for 83% of adult video streamers, followed by Hulu at 23% and Crackle at 19%, out of a total 157%. The TVoD category is much more fragmented, with ITunes top at 13%, followed by Google Play and Amazon Instant Play, both on 12%, out of a total 117%. Only 34% of US adults regularly watch TVoD on the main TV, although clearly the number doing so on connected devices is much higher.

FVoD is not surprisingly the most popular OTT category on the big screen with 88% of US adults watching some, but SVoD is not far behind at 82%, reflecting the popularity of Netflix in particular. This highlights the saturation of the US SVoD market with relatively little scope for further growth, which is why Netflix, Amazon and Hulu are spending so heavily on overseas expansion. The percentage of people viewing SVoD on big screens is still substantially lower in most other countries.