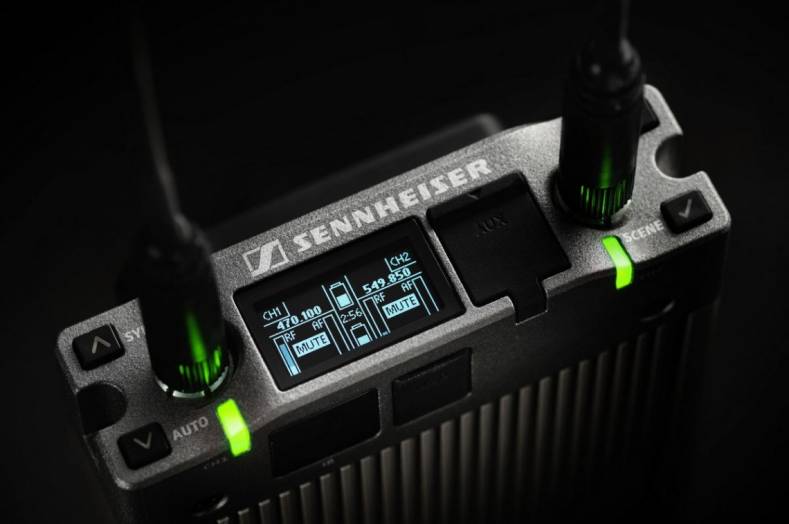 Sennheiser used the 2016 NAB Show to give a full showing to the EK 6042 slot-in camera receiver for wireless microphone systems, which was first seen at last year’s IBC. This true diversity, two-channel system can be slotted into Sony and Panasonic camcorders as well as stand-alone audio recorders and works with both analogue and digital mics or a combination of the two.

Designed to work with all current Sennheiser radio microphones, including the Evolution and Digital 9000 series, the EK 6042 is able to automatically register both what kind of transmitter it is to work with and detect the right frequency to run on. This last feature is seen as particularly important when filming at events such as music concerts, where many of the available frequencies will be already allocated for the musicians.

Configuration is carried out automatically using infra red connections, which Sennheiser claims save time and energy during the set-up process. The EK 6042 is able to work with leading camera makes, including ARRI and Panasonic, both of which use Unislot connectors, and Sony. There are two options for adapters, one 15-pin, the other 25-pin, which ensure compatibility with widely available cameras.

Makes of camera that do not offer an audio receiver port can still work with the EK 6042 when it is mounted using a back panel adapter. The unit can also be used directly with an outboard audio recorder and conforms to the Sound Devices SuperSlot interface standard. It can run either two analogue or two digital channels, or one of each.

The EK 6042 works across a bandwidth of 184MHz, working in the UHF range between 470 and 654MHz. It does not require software to be installed and can be connected to a PC or Mac computer over USB to be configured using a browser.

Commenting on the new system, Tobias von Allwörden, product manager with Sennheiser Broadcast and Media, said, "The EK 6042 two-channel camera receiver includes the auto-configuration feature and the option of conveniently programming the camera receiver via a web interface. As a true-diversity receiver with four separate receiver circuits, the EK 6042 [can work] even in difficult RF environments."