The ubiquitous focus of presentations and exhibits at the 2016 NAB Show will be IP media. Several groups of major manufacturers have formed alliances to standardize and promote several new production-oriented video-over-IP formats.

Video-over-IP alliances aren’t exclusive clubs. Many manufacturers are joining more than one alliance group format, and each format has a market niche. One or more of the following alliance technologies will be prominently on display in many 2016 NAB Show exhibits. To briefly review the players:

AIMS (Alliance for IP Media Solutions) is an evolving set of open technical standards for the IP transition that integrates infrastructure and applications and accelerates the transition from SDI to IP to cloud-based capabilities.

ASPEN (Adaptive Sample Picture Encapsulation) is a format for encapsulating uncompressed Ultra HD/3G/HD/SD over MPEG-2 transport streams. ASPEN was a collaborative effort of Evertz and other broadcast industry manufacturers.

TICO is an alliance-defined compression and video-over-IP standard enabling the industry to seamlessly update existing SDI-based workflows to IP and UHDTV 4K without the cost of a complete renewal.

NDI (Network Device Interface) is a royalty-free software developer kit developed by NewTek, for anyone wanting to enable IP workflows in their production.

NewTek director of public relations Scott Carroll told us "With all of NewTek's NDI products worldwide, all the NDI-enabled products from our Developer Network, the many new NDI integrated products to be announced at NAB including those from multiple capture card companies and others that have massive communities, there are millions of customers that will have NewTek’s NDI IP standard at their fingertips."

A number of manufacturers announced their adaption of NDI before the 2016 NAB Show opens. NDI has already become the industry’s largest ecosystem of IP-enabled products using the same standard. Some of the new NDI adopters are:

An NDI interface was added to the Video 5 recorder.

MEDIA 5 SRL recently announced its adoption of the NDI standard for its NET IP Line of products.

Renewed Vision announced its adoption of the NDI standard for IP-based production workflows for its ProPresenter media presentation and CG application. ProPresenter will be part of the NewTek Developer Network, and recognizable as a source by other NDI-enabled devices and systems connected to a standard Ethernet local area network. 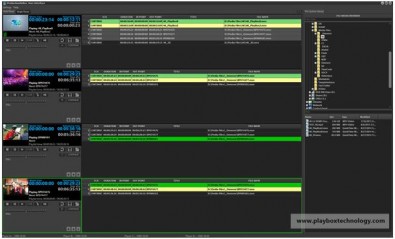 PlayBox Technology just announced a major extension to the capabilities of its ProductionAirBox Neo multichannel playout server. Central to this development is the integration of support for NDI.

PlayBox Technology CTO Stanislav Petkov said "We have identified NDI as the most promising of the various proposed protocols. It is inherently compatible with a very wide range of applications and devices. NDI will streamline our solutions and create a more user-friendly production environment than was ever possible in the SDI world.”

Integrating the NDI protocol enables ProductionAirBox Neo to send up to four channels of low latency, high quality video and up to 16 channels of audio to NewTek’s TriCaster or any other NDI compatible device.

The LiveU LU2000 has been upgraded for NDI protocol.

LiveU announced its adoption of NDI standard for its LU2000 bonded video transceiver. With NDI, users can implement a remote production setup with multiple cameras equipped with LiveU field units that communicate back to the studio for true at-home production. This reduces the amount of equipment staff has to transport and eliminates expensive onsite production costs.

Back at the studios, all NDI integrated equipment, such as the NewTek TriCaster, monitors, and graphic overlays all automatically recognize the available NDI channels and can consume the feeds without the challenge of having to include a matrix router, configuring that router, and all the analog SDI cables that would be necessary.

LiveU Co-founder & COO, Avi Cohen said “NewTek is a long-standing partner and we wholeheartedly support NDI as the IP standard. In fact, at NAB, we’ll be partnering with NewTek, Panasonic, and TWiT.tv to demonstrate the amazing capabilities of NDI-enabled devices in an exclusive live studio in our booth.” 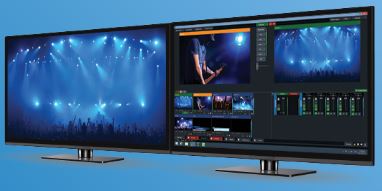 STUDIOCOAST released version 17 of vMix Live Production and Streaming Software just ahead of the 2016 NAB Show. Now in its 7th year of release, vMix reinforces its position in streaming innovation with the addition of support for NDI, integrated PTZ camera control and direct web browser inputs, all specifically designed to assist users.

"User feedback drives a lot of what we continually add into vMix and the new PTZ and Web Browser support are no exception," said vMix founder Martin Sinclair, "we’re also one of the first to adopt the new NDI standard from NewTek which we believe will revolutionize how our customers think about live production by making it easy to share live video over an ordinary network".

Deltacast, maker of LiveXpert products, announced in February the adoption of NDI for LiveXpert solutions for live and sports video productions. LiveXpert solutions will be showcased in the 2016 NAB Show StudioXperience exhibit, as a member of the ecosystem of partner solutions already in the world of NDI.

Evertz announced its support for the NDI format for IP-based production workflows based on its Software Defined Video Networking (SDVN) solutions.

By adding NDI support, Evertz SDVN extends the capabilities of IP within live production. This benefits any facility transitioning to IP by taking advantage of a 10GbE core SDVN system to bridge a large number of NDI-enabled devices, providing scalability and flexibility today and into the future.

This new standard for live production IP workflow is bi-directional and backwards compatible with a large number of devices from top manufacturers that already use NDI allowing IP connectivity between devices. Customers using Evertz SDVN will be able to connect to the many products across the NewTek Developer Network.

NewTek expects more manufacturers to announce NDI support at the 2016 NAB Show. The company recently announced it has joined ASPEN.