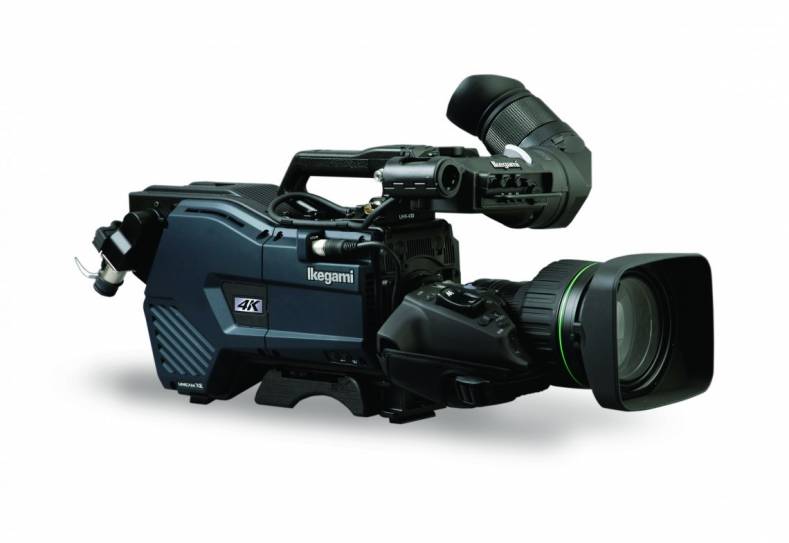 At The 2016 NAB Show Ikegami will introduce the UHK-430 4K camera, the first member of the company’s new Unicam XE camera series. Designed for use in the studio and field, the UHK-430 features three 2/3-inch 4K (3840x2160) CMOS sensors with RGB prism optics, for “Real 4K” resolution from 24 million pixels (8 million per sensor).

Ikegami’s new UHK-430 4K camera includes the company’s proprietary AXII ASIC for low power and new digital signal processing functionality. It also features 16-axis color correction from a 3D linear matrix and iLog, the Ikegami log transfer characteristic for HDR (high dynamic range). The UHK-430 is capable of 40G transmission using standard SMPTE hybrid fiber/copper camera cable, uncompressed 4:4:4 resolution RGB transmission, with eight HD channels from CCU to camera, and one HD trunk channel from camera to CCU. In addition, a Gigabit Ethernet connection is available on the Ikegami UHK-430 camera for external use. The UHK-430 is switchable between 4K and 2K formats. As an option the CCU can output simultaneous 4K and 2K, with available 2K cutout from the 4K picture. A plug-in output module allows for flexible 4K signal formats including Quad 3G, 12G, and IP.

A number of accessories to enhance the UHK-430 and future Unicam XE camera models will also be shown, including three viewfinders—the VFE741D, a 7.4-inch OLED viewfinder; the VFL701D, a 7-inch full HD resolution LCD viewfinder; and the VFL201D, a 2-inch portable LCD viewfinder. All three include a serial digital interface for integrated camera and viewfinder menu control. The SE-U430, a system expander for the camera, will also be on exhibit.

For the very high end, Ikegami will show its SHK-810 8K ultra high-definition television (UHDTV) camera. Developed in collaboration with Japan Broadcast Corporation, the SHK-810, is notable for the significant size reduction and lightweight design that it brings to field and live production.

In addition, two new Ikegami-designed 4K monitors will be introduced. The HQLM-3120W is a 31.1-inch broadcast quality monitor. It incorporates a 10-bit, LED backlit, UHD LCD panel with a contrast ratio of 1450:1. There are two 4K inputs, also 3G/HD SDI and HDMI input as standard. Also on display will be a prototype alternate 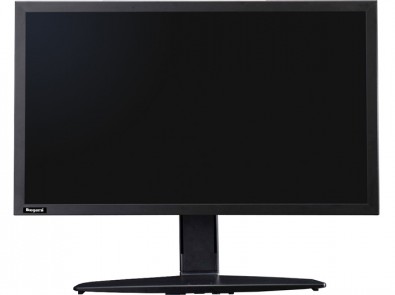 The Ikegami HDK-97ARRI and HDK-95C are now 4K-ready. Both cameras benefit from the Super Resolution Converter integrated with Ikegami’s BS-98/CCU-980 Multi-format Base Stations. The 4K Super Resolution Converter provides a simultaneous 4K output when the camera is operating in a 1080p format, such as 1080p/59.94Hz. Ultra HD band image enhancement is provided for the 4K signal.

NAB attendees will get their first look at the MCP-300, Ikegami’s new Ethernet master control panel. Users will benefit from its 10-camera select capability, plus 10 groups of 10 for control of up to 100 cameras. The MCP-300 features a large seven-inch color touchscreen, complete filing capability, plus optional HD SDI diagnostics output.

In addition, this year’s NAB will mark the debut of the Ikegami HDL-F3000, a high sensitivity compact two-piece separate optics camera for gyro-stabilized gimbal applications. Equipped with 2/3-inch 2.6 megapixel CMOS sensors, it achieves a minimum illumination of 0.007 lux, with image enhancement features that include haze removal, backlight comp, and digital zoom. The HDL-F3000 operates in 1080i, 720p, and 30p formats.

The HLM-1705WR 17" HDTV/SDTV Multi-Format LED Backlit Monitor employs a liquid crystal panel for reduction in thickness, weight and power consumption. It is designed for use in various spaces such as sub-control rooms, editing rooms, monitor wall, transmission control desks, and outside broadcast vans.