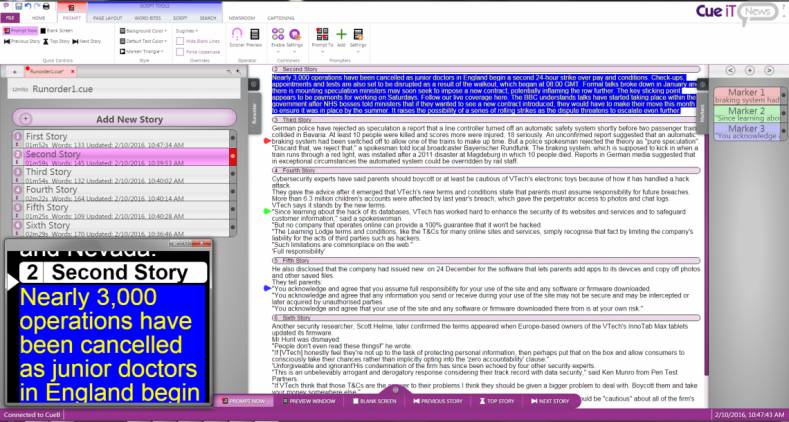 The new CueiT software is Unicode compliant with multi-language and full bi-directional ability within a script.

CueScript said that its development team strived to create a more user-friendly prompting system based on user feedback and real world experience. The new CueiT software includes a ribbon menu style, making all features viewable and accessible, without impeding the view of the script and run order. There are also quick commands and features that can be accessed from multiple locations within the program; markers to enable the operator to create their own sub-run order and pinpoint positions to navigate to within the script, either on their edit screen and/or the prompt output; and there’s no separate configuration menu; all features can be accessed without needing to come out of prompt mode.

The new CueiT software is Unicode compliant with multi-language and full bi-directional ability within a script.

Also on show is a new CSF10 prompter system designed for use with jibs and cranes. 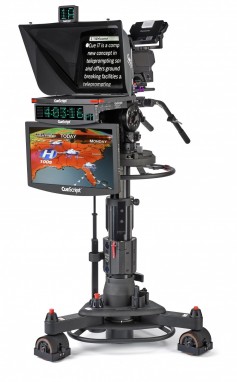 The rugged CSF10 mounting system gives crane and jib operators the assurance of no movement or wobble at the end of a camera move.

The new CSF10 is a lightweight yet fully featured prompting system that can be used with a collapsible hood and prompter glass or as a straight reading system without any additional hardware. It features a 2000nit screen that is easy to read, even in bright daylight conditions. The rugged mounting system gives crane and jib operators the assurance of no movement or wobble at the end of a camera move. The system also features intelligent Cuelights that are automatically switched to either direction by a built-in motion sensor known as an “accelerometer.”

CueScript will also demonstrate its next-generation in talent monitors with the CSTM24. This 24-inch HD-SDI talent monitor, weighing approximately 10 pounds (4.5 kilograms) features a double arm mounting system with no restrictions to the camera support, either manual or robotic.