The Dubai World Cup, the horse race with the richest prize money in the sport, takes place on 26 March, broadcast live to 100 countries including the UK, Republic of Ireland, Australia, France, Russia and Japan, plus North America and the Caribbean. TV coverage is being coordinated by rights management company Racecourse Media Group (RMG), which has contracted facilities provider Timeline Television to supply crew and equipment to cover the day’s racing.

Timeline Television has put together a flyaway package including technology from SAM (Snell), Axon, Sony, Riedel and EVS for the Dubai World Cup, an event comprising nine races that have a collective prize value of $30 million. The centre piece race, also called the Dubai World Cup, offers $10 million of that, $6 million of which goes to the winner.

The races are held at the specially designed Meydan racecourse in Dubai, where Timeline has installed a full broadcast facility for all 20 fixtures of the course's season. This includes two galleries, one of which will be used for the international feed, while the other will run operations for the live studio. 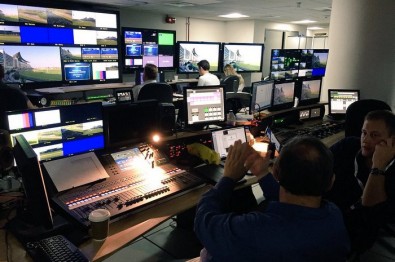 One of the two Timeline galleries at Meydan racecourse

The coverage will use several specialised pieces of kit, among them a miniature RF-connected Horse-Cam for interviews with jockeys at the winning post; a HawkEye Smart Replay system, which made its debut at the Dubai meet for this season to allow the stewards to analyse video footage for any rule breaking by the riders; and the ChyronHego Virtual Placement package for on-course commercials.

Presenters, who include Nick Luck, Angus McNae, Rishi Persad and Zoe Cadman, will have access to HEGO touch screens in the studio so they can provide deeper examination of the race action.

Timeline began installing the Meydan facility in October 2015 in time for the start of the season on 5 November. Commenting on the work, the company's managing director, Daniel McDonnell, said, "We have provided RMG and Meydan Racecourse with an accomplished team with strong planning, logistics and relationship building skills. These have delivered a compelling, value for money, technically innovative system for this season's racing and its grand finale, the Dubai World Cup."