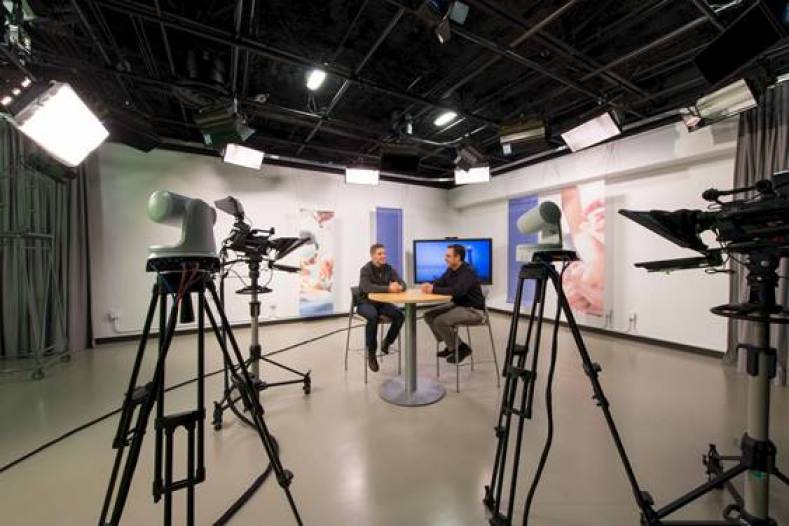 Providence Health & Service—with facilities across Alaska, California, Montana, Oregon, and Washington—has used video as part of its internal communication efforts for years but now has upgraded its facilities to better serve its employees. Advanced Broadcast Solutions completed the install in early December, and Providence produced its first live program before the end of the year.

Housed at Providence’s headquarters in Renton, WA, the new production space includes a 30x40 studio, control room, equipment room, two edit suites, and office space for the department. Through its videos, Providence shares messages from its executive team, as well as information about patient safety, financials, and strategic priorities to more than 80,000 employees.

The studio features two JVC GY-HM890 ProHD cameras with Prompter People prompters on Vinten Ped Plus pedestals, plus two Panasonic AW-HE130 PTZ cameras on Vinten tripods that are adjusted in the control room. The lighting grid is stocked with energy efficient Brightline fluorescent and LUPO LUX LED fixtures, all of which are controlled through an Elation Scene Setter 24-channel DMX console. 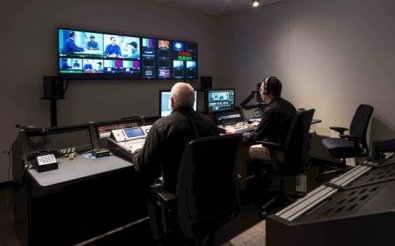 A 12x12 green screen wall was painted to allow chromakey productions, and the studio has a 360-degree curtain track with black and gray backgrounds. Between video shoots, the area is used regularly for still photography projects. There is no window between the control room and the studio, so ABS also installed a compact Marshall camera in the lighting grid so the control room staff can have a constant wide view of the area.

The system is anchored by a Broadcast Pix Granite 1000 1 M/E integrated production switcher, which includes a built-in multi-view that feeds two large Panasonic screens. Two 22-inch touchscreens are positioned near the switcher for additional control and monitoring options. Using Telemetrics technology, the Panasonic PTZ cameras can also be used in the conference center and connected directly to the switcher via fiber.

Positioned next to the Granite switcher is a Roland M-300 compact digital mixing console. The back row of the control room is designated for CG and prompter operations, with extra space for a producer.

Next to the control room is an equipment room, which houses an AJA Kumo router with Kumo CP control panel, plus two Ki Pro recorder/players. A 17-inch JVC reference monitor was also installed for shade monitoring and critical image analysis. Providence currently uses an outside vendor for streaming, but eventually plans to handle streaming internally via its new ViewCast Niagara GoStream streaming media appliance.