Linear Acoustic is a specialist in high quality digital audio for television. The company designs and manufactures the AERO range of real-time and file-based loudness managers, UPMAX upmixing and downmixing solutions and the LQ series of loudness metering products. Tim Carroll, Linear Acoustic’s founder and president, talks about today’s technology and the future of audio.

Tim Carroll, Linear Acoustic’s founder and president, grew up in the New York City area with a passion for audio and a natural curiosity about broadcasting. As the chief engineer of his high school and college radio stations, Carroll utilized what he calls the "disassembly method" of learning — that is, taking stuff apart and sometimes getting it back together.

In 1995, he joined Dolby Laboratories and spent several years on the film stages of New York at a time when the market for digital sound in film was growing. His time there provided an in-depth experience with the production of matrix and discrete surround audio with the then brand-new DVD format which specified the Dolby Digital (AC-3) codec for multi-channel audio.

Around the same time, the AC-3 codec was also mandated for use in the ATSC digital television standard and soon thereafter in the DVB specification. Having access to major market TV stations allowed Carroll to experiment in the real world with early DTV audio products.

In this new feature called Viewpoint, we asked Carroll about the issues his company faces and what he thinks the future of audio will bring. 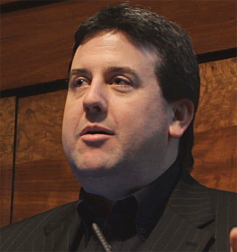 The Broadcast Bridge: What was the unique technology, service or development that led to the founding of your company?

Tim Carroll: We developed a television audio processing system intended to bridge the gap between analog and digital and stereo (or mono) and 5.1 channel surround. It was a loudness processor years before ATSC A/85, CALM or EBU requirements were even being considered. In fact, ITU-BS.1770 was not even published.

It also introduced the idea of upmixing and pre-conditioned audio for external Dolby Digital (AC-3) encoding. Most importantly, though, it handled the audio “housekeeping” for a facility, enabling SAP and EBS (now Alternate Language, DVS and EAS). It made quality surround audio much easier for broadcasters who were often meeting digital stereo for the very first time.

The Broadcast Bridge: What differentiates your company from your competitors today? What do you offer that is unique?

Tim Carroll: We still make systems that support the original idea of making audio easier. Happily, combined industry efforts, including ours, have made upstream content so good that in many cases, we need to do very little if anything to it before transmission.

We continue to innovate new technologies that help to ease the creation of this high quality, engaging audio and we have become very focused on “out of the box” answers, meaning getting away from custom hardware.

This means software tools, enterprise and cloud-based systems, and OEM and licensing technologies to other companies that build tightly integrated systems that provide playout, transcoding and automation all in one place.

The Broadcast Bridge: What are the key market developments facing audio companies like yours today?

Tim Carroll: One is the shift away from application specific hardware — a good change that we actively support. Another is how consumers access content. It can no longer be assumed that it will be in a room with a television set. Linear broadcast is increasingly difficult to integrate into our increasingly non-linear lives, so today’s broadcaster has to be agile enough to deliver content anywhere at any time to any device.

This makes it challenging to figure out where traditional and still necessary tools fit. Done right, it actually means that quality has a better chance of being preserved all the way to the consumer.

Another is the coming of immersive and personalized audio systems. Immersive is on-air today using Dolby Digital Plus with Atmos, and it can be experienced on major services like Vudu, Netflix, Amazon and others. With the coming ATSC 3.0, it will expand further. Making all of that work behind the scenes is far beyond what was required for 5.1, and integrated systems will make this possible and effortless.

Linear Acoustic AERO.2000 Loudness Manager handles up to 16 channels of baseband or encoded audio via both AES or HD/SD-SDI I/O.

The Broadcast Bridge: You are on the professional side of the audio business. Has the transition away from large facilities to home studios affected your business and how do you adapt to the change?

Tim Carroll: While this has definitely affected the post production side, you cannot yet produce sophisticated real-time and/or high profile programs in a bedroom closet. Certainly someone can edit and post a video to myriad services that make it available for the general public, but this is not really where the majority of viewers are looking today.

That said, the delivery mechanisms are absolutely changing, and there are more pieces of content being created in smaller studio environments, though they will ultimately have the same delivery requirements as a large studio.

So the tools have to be targeted for these evolving environments, but the systems are very similar or identical between large and small studios. For example, a small studio might have a tighter budget, but they will still be using the same digital audio workstations the large studios use.

The Broadcast Bridge: What new technologies are affecting the way your technology works today?

Tim Carroll: Surely it is IP, the buzzword for part of 2015 and I suspect all of 2016 and maybe beyond! We were an early member in the Alliance for IP Media Solutions (AIMS), and this stemmed from the Telos invention of Livewire Audio over IP and the foundation of AES67.

After more than a decade of successful Audio Over IP installations in radio, it is gratifying to see that the AES67 standard is enabling the same flexibility for television audio.

SDI was a very good idea for its time, but it has been limiting to audio, the proof being the resurgence of the aging MADI format which has plenty of problems of its own!

IP is real and it will completely change everything we do making things easier, more flexible, more reliable and (shockingly) less costly in the long run. This will also enable the new immersive and personalized audio formats which have data as well as audio requirements.

The Broadcast Bridge: Finally, what will your business look like in five years?

All of this will support the “anytime, anywhere, any device” model of consumers and will result in better quality and reliability. This is a great thing for all segments – especially consumers.