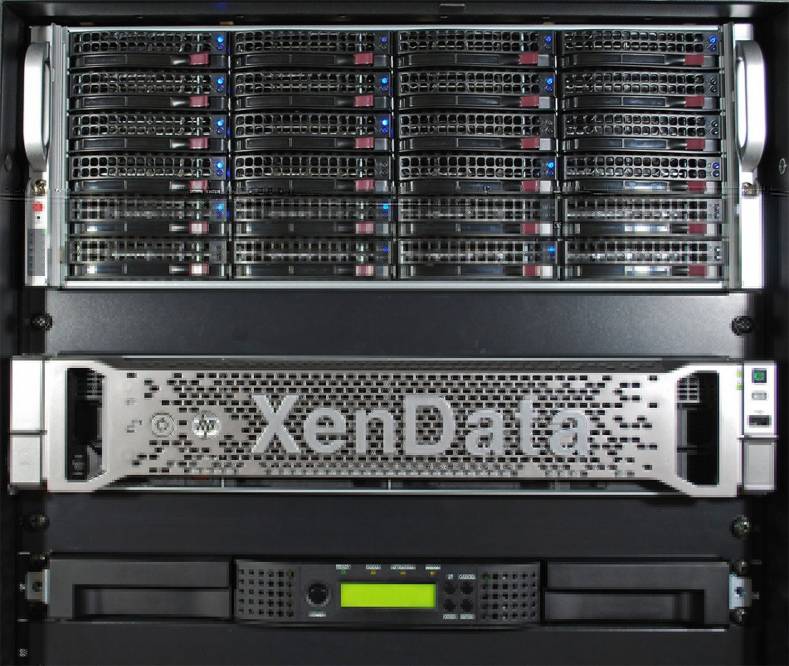 XenData is to launch its DX-240 near-line disk archive system with continuous backup to LTO-7. It has a network attached storage (NAS) architecture, storing files on high performance RAID while simultaneously creating a backup copy on LTO-7 cartridges.

The DX-240 is available with 44 6TB SAS disks in a RAID 60 configuration to provide 240TB of usable capacity. Network connection options include copper and optical 10 GbE, and the system can also connect to a SAN via 8Gb/s fibre channel. As files are written to the disk array, they are also written to a direct-attached LTO-7 library. All changes to the file system are recorded on LTO, including file deletions, over-writes and renames. Unlike conventional backup, this provides scalable, continuous data protection, says XenData.

According to XenData, the DX-240 runs a Windows Server 2012 R2 operating system, and provides both file system and object storage interfaces. The file system interface allows files to be written to and restored from a standard file-folder structure created by the user. The object storage interface has an XML API that can be used to push and pull media assets to and from other locations on the network. These options mean that the system works with most media asset management systems and other applications used in the creative video industry. Compatible MAMs include those from Apace, axle Video, Cinegy, Dalet, Empress Digital (eMAM), Evertz (Mediator), IPV (Curator), Metus and Squarebox Systems (CatDV).

In addition, software modules are available to deliver a tight integration with specific applications, including for Avid Interplay Production and for archiving Avid projects from shared edit storage. Alternatively, video files may be archived and restored manually to a file-folder structure using Windows Explorer or FTP utilities.

The system consists of a 2RU archive server, a 4RU disk enclosure and a 1RU robotic LTO-7 library, which holds up to seven 6TB LTO-7 cartridges. The DX-240 will issue email alerts and on-screen messages when operator intervention is required to exchange full LTO tapes for new blank cartridges. Following export, the full cartridges can be retained in an offsite location for optimal data protection.

“The big difference between the DX-240 and conventional NAS is its continuous backup to LTO-7, which is a scalable technology,” said Phil Storey, XenData CEO. “Conventional backup doesn’t work with the large storage capacities required in the media and entertainment industry, as there is never the time to perform a full backup.”