How do you save money producing big sports events? You don’t send a fleet of trucks to cover it, but rather you do it remotely via IP and fat pipes. Trending rapidly upward in the live broadcast sports production industry, is producing and switching at studio headquarters as if it were at the event.

As evidence that Moore’s law is far from its demise, remote individual camera connections from many-camera HD professional TV events is becoming less expensive with minimal delay, higher quality and increased reliability over legacy baseband fiber or satellite. All that is needed at the venue are the usual cameras, associated camera and audio gear, talent and talented camera operators. A method to connect the camera signals and CCU controls to a stable WAN for interface with the studio allows the OB production truck and crew to stay at its home facility.

The cost of high availability IP bandwidth and dedicated wavelength services has plummeted over the past five years. According to Media Links sales VP for the Americas Dave Herfert; “A 100 GB link from New York to Washington D.C. can be leased today for about $5000 USD per month. However, the last mile is always the problem.”

Choke points cost money and sports motion is the most difficult video to compress. That’s why approximately 70% of the major sports venues across the US have added high-speed WAN access and associated encoding and support gear. “It was a goal for Media Links to get high speed WAN equipment deployed in 100% of the pro sports sites; there are still a lot of ‘hard to reach locations with fiber access’ and Tier 3 and 4 event sites where Media Links has not begun to deploy yet” Herfert said.

The technology at play here is the Media Links MD8000 Media over IP transport solution with its Universal video module, high speed user Data interfaces, as well as diverse high speed uplinks to the network. In addition to its involvement in upgrading sports venue WANs, Media Links is also building a new video management center in NYC for a major North American service provider. All tuned for 100% Quality of Service (QoS) sports video transport.

Cathy Emmons, Director of Engineering & Technical Services at Media Links came from another CT based company, ESPN. While discussing sports TV and IP, Emmons stated: “In live TV sports, everything is live and relevant for about 5 minutes. Nobody cares about tomorrow.”

Broadcast facilities are embracing IP-based infrastructures and its sure to be the technical theme at NAB 2016. Video delivered as IP is the professional version of Video over IP encapsulation schemes targeted around compressed and uncompressed delivery formats that all IP enabled devices recognize. The WAN has adopted MPEG2TS TR-01 and SMPTE 2022-6, while IP Studio applications are taking shape around AIMS versus ASPEN. Discussions around competing technologies will surely generate noise this year at NAB 2016. 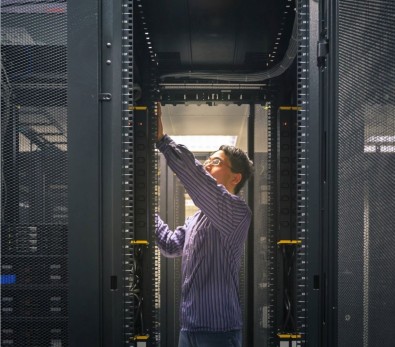 LAN-based systems have become quite stable. An errant backhoe operator alone in a pasture can kill a WAN. The answer to prevent such and similar sudden unexpected disasters is switched backbones and on-demand network bandwidth. SDN (Software Defined Networking) is possibly the biggest change in future WANs. SDN technologies can rapidly scale connection speeds up or down, and core networks are increasingly deploying it. SDN significantly reduces the need for long-term leased or dedicated network backbone connections. SDN network connections can be allocated as needed from a pool of resources that make up a virtualized backbone, and released when no longer needed.

With “bandwidth on demand,” the backbone can be scaled up to support coverage for a large multi-camera event and then scaled down when the event is over. This is especially useful for such events as golf tournaments or auto races that only visit a given venue once per year. Plus, with the right form of provisioning system that is compatible with carrier systems, bandwidth can be added as needed to accommodate unexpected demand.

Full SDN implementation will require replacing traditional command-line based IP routers and switches at the network core with ones that expose a rich set of capabilities to management devices.

Connections to a flexible backbone require the appropriate physical interfaces, and the ability to perform packet processing functions to bridge between different address spaces and prioritize certain streams as necessary. Necessary control plane functions need to be extended to enable endpoint networks and management tools to provide bandwidth planning/reservation and connection management across the backbone without compromising the security of either the endpoint or backbone networks.

Packet processing is one of the most critical aspects of the transition to a fully IP end-to-end network. For security reasons, as well as to permit different addressing schemes and support overall traffic management, individual IP packets may need to be converted as they pass from endpoints into the backbone or from one network domain into another.

One such transformation will commonly occur as packets pass from a closed network within an endpoint (such as a private studio LAN) into a backbone interconnection link (perhaps supplied by a carrier).  Legacy infrastructure will be replaced with common off the shelf hardware that may never need to be replaced, as IP cements itself as the future technology of choice.

As the WAN and LAN networks evolve, the types of transformations can change; equipment life expectancy, converged platforms, cloud based architectures, pure IP based workflows, richer user experience, targeted advertising, significantly reduced cabling and rack space footprints, greener technologies, etc.), and it is likely that some form of adaptation and paradigm shifts will be required throughout the life cycle of the network. 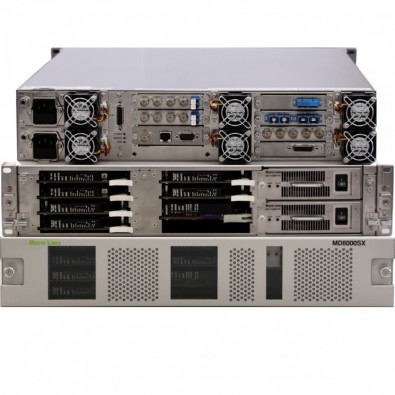 Back, inside and front of a 2RU MD8000SX, the smallest Media Links local video access platform chassis. The largest is the 7RU MD8000EX. Both were used to transport the Sochi Winter Games to NBC.

IP and file based transfers allow for faster access to content without transcoding. The key is to encode and encapsulate in the format editors can immediately use in the studio to create replays, highlights, bumpers and promos. The 2014 Sochi Winter Games were transported to NBC and in JPEG2000 (J2K). Media Links provided NBC Olympics with a full system of MD8000 media transport solutions with JPEG2000 source and destination modules for loss-less video delivery and hitless switching over an existing STM-16/OC-48 private line network.  This solution ensured that NBC Olympics and its network provider had a cost-effective alternative to traditional video transport services. The wavelet-based J2K format appears more robust for the high degree of movement common in sports action.

Some major broadcast sports studios have converted their entire facilities around JPEG2000 compression and leveraging MPEG2 Transport Stream over IP as the universal in-house encapsulation format.  As content arrives into the facility, it is conditioned using JPEG2000 and H264 10 Bit compression in order to be used for live production, archival and distribution to 3rd party facilities.

Not a format war

Some are describing the various new IP encapsulation formats for video, audio and ancillary data as format wars. Clearly there are benefits and draw backs between today’s maturing SMPTE 2022 standards and newly formed recommended practices. Disruption will be commonplace over the next 18 to 24 months as alliances are formed and turf battles continue.  The beauty is that IP presents a whole new world of ‘options’ depending on user preference and the industry will benefit greatly from the current upheaval from legacy SDI to next generation IP solutions.

The world of Video over IP may never see one clear winner, but the common fabric throughout this evolving landscape is ‘transport’ as the foundation of the future.

The author thanks Media Links' Dave Herfert and Cathy Emmons for their valuable assistance and input.