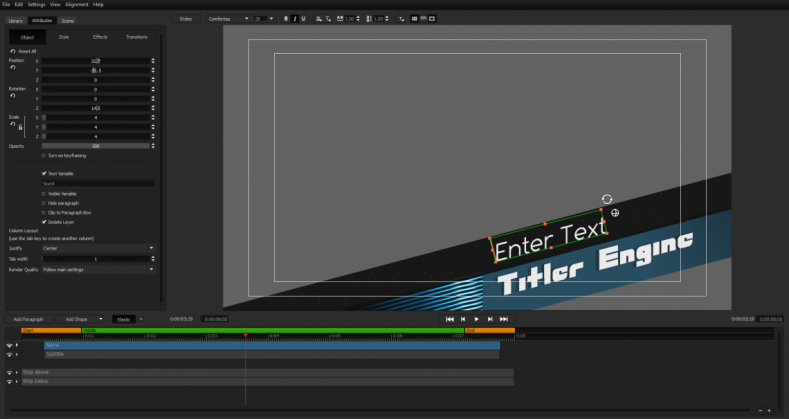 The new Post Producer Titler Engine from Telestream and NewBlue.

The digital workflow specialists at Telestream and the and vfx/titling experts at NewBlue. have combined their skills to announce the release of the new Post Producer Titler Engine. It’s designed as an add-on option for Telestream’s file-based content assembly service, Post Producer, which is part of their Vantage media-processing platform.

The new Titler Engine automates the creation of individually branded versions of the same package by tagging them with unique, high-resolution animated titles and graphics.

“The Post Producer Titler Engine does for file-based content creation what broadcast titling systems do for live over-the-air broadcasts,” said Paul Turner, vice president of enterprise product management at Telestream. “However, in the world of multi-platform distribution, automation not only drastically speeds up what was previously a tedious process, but it also reduces the possibility of error significantly.”

The new Titler Engine operates on one or more Post Producer nodes running Microsoft Windows Server 2012, letting operators submit an Excel CSV file containing up to hundreds of text variations into a Vantage workflow. Post Producer then uses this database to create individual files for each variation of the package, and delivers each iteration either for playout or for use in other Vantage workflows.

“Being able to automate title creation on this scale, and at this quality, will save customers tremendous amounts of labor and associated costs," said Todor Fay, NewBlue, Inc.’s CEO and co-founder.

Title templates are created with the NewBlueFX Titler Pro title editing software, available as a plug-in for major non-linear editors, like Adobe Premiere CC and Avid Media Composer, or as a multi-platform standalone editing tool.