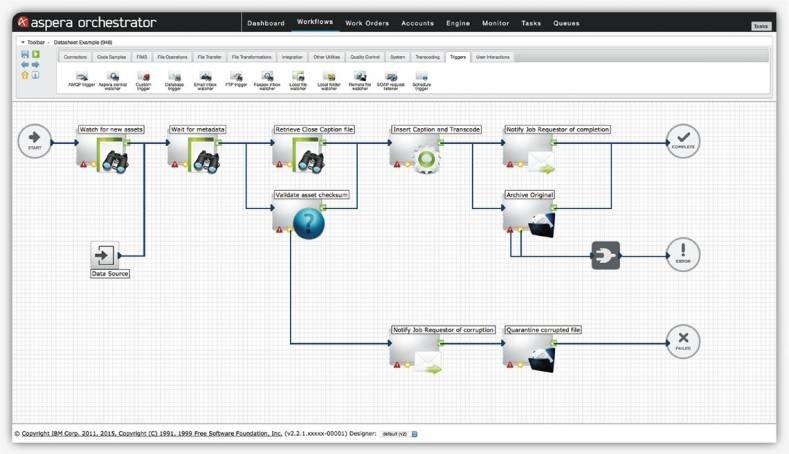 Aspera Orchestrator is a part of the Berlinale file workflow.

As one of the most important events for the international film industry, Berlinale attracts more than 300,000 attendees from around the world, and showcases some 400 films of every genre, length and format on more than 60 different screens, totalling over 2500 screenings.

Building on the Aspera workflow deployed in 2015, Berlinale has added Aspera Orchestrator to automate and streamline its internal workflows. Integrated into their existing, highly automated QC and distribution processes, Aspera Orchestrator analyzes, validates, and manages all incoming digital packages and automatically passes them on to the primary storage in the data center.

With 4K films continuing to play a large part in the festival’s line-up, the organizers have again deployed Aspera Shares to handle the increased digital file sizes of 4K films. The solution enables the high-speed, file-based ingest of feature-length films from participants directly to Berlinale’s data center in Berlin. All films for the festival program and the European Film Market are stored as DCPs on a huge server, with 250 films transferred daily to the various festival cinemas.

With film files of up to 250GB each, the growing demand to ingest and share large files digitally from multiple locations across the globe has driven the need for faster transfer speeds, improved reliability, and a streamlined digital workflow. With Aspera Shares, the organizers can use their full 10GB fiber connection to receive DCP files, quickly and securely regardless of distance and network conditions. By standardizing file-based film delivery on Aspera Shares, content from contributors can be easily gathered and managed.

In addition, Berlinale is using Aspera Console for real-time tracking and control over transfers. Aspera Connect Server powers the architecture with the FASP protocol allowing the large number of participants to exchange their files quickly and reliably over the wide area network.