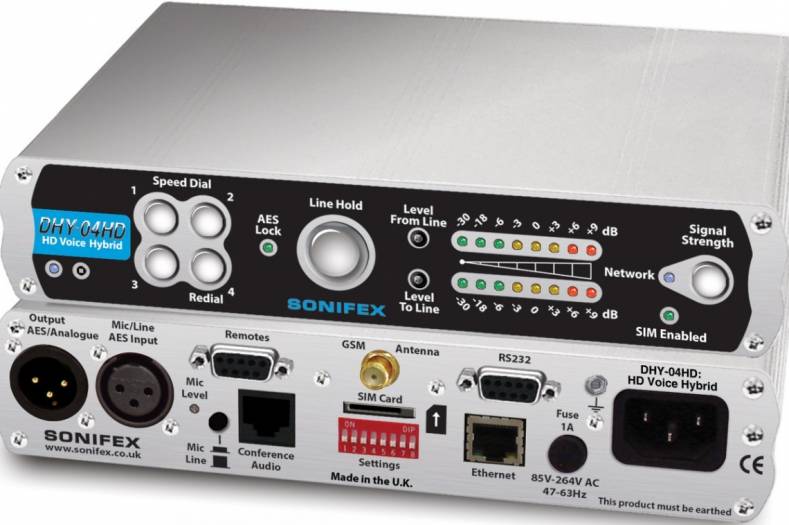 Audio processing and radio equipment manufacturer Sonifex will highlight contributions and communications technology at BVE 2016 this month with the launch of a new HD Voice and GSM hybrid. The DHY-04HD will be shown alongside other newly introduced products, including an audio fail-over switcher and a rack-mount phantom power supply, plus the company’s established ranges of distribution amplifiers, monitors and converters.

Sonifex's DHY-04HD is a hybrid balancing unit for connecting calls using HD Voice from remote locations to an on-air studio. The unit converts either 3G or GSM signals carrying the wideband audio format into a four-wire audio feed that can be brought up on a broadcast sound mixing console. A return signal for the caller is also produced during this conversion process.

The WB-AMR coding scheme enhances the quality of the connection, making it better suited to radio and TV use than a standard POTS (plain old or post office telephone service) connection. HD Voice produces a frequency response of 7kHz, double the capacity of GSM or POTS. It is used widely by reporters in the field, as well as in remote studios and outside broadcast trucks.

The DHY-04HD is based on the DHY-04 hybrid but features extra front panel display components, including two LEDs; one is related to the SIM that is necessary for establishing the HD Voice connection, while the other shows availability of the GSM network. There is also a push button enabling the mobile signal level to be shown on the meter LEDs.

Among other new products for BVE is the RB-FS42 fail-over switch, designed as a lower cost alternative to the established higher channel count RB-FS82. The unit incorporates four main and two standby stereo analogue, AES/EBU digital audio and RS232 inputs and outputs, with capability for Ethernet connection.

Also on the stand in the ExCel centre will be the RB-MSP6 1U rack-mountable phantom power supply. This is intended to be used with a maximum of six RB-MS4X3 quad three-way passive mic splitters. It delivers input redundancy to keep power flowing to mics in case of a single main dropout.