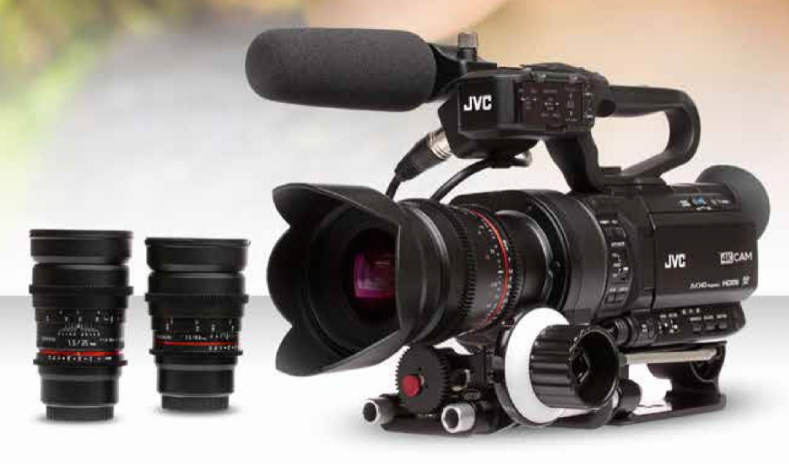 When it comes to shooting in 4K, many shooters previously had to rent a UHD camcorder because they were expensive. Now, there are several reasonable-cost UHD cameras available and this article will focus on one of them, the latest JVC GY-LS300 4K Super 35 camcorder.

After several years of intense engineering, in 2015 JVC began shipping the GY-LS300 camcorder. (Figure 1.) The LS300 SD/HD/4K camcorder provides a cost-effective solution to a common dilemma. Independent shooters, to put food on the table, typically shoot with a traditional ENG/Event SD/HD camcorder. However, to accept what are currently infrequent 4K jobs, a 4K a camcorder has to be rented, a specialty 4K camera (e.g., a DSLR) purchased, or an investment has to made in a new camcorder that shoots all formats. 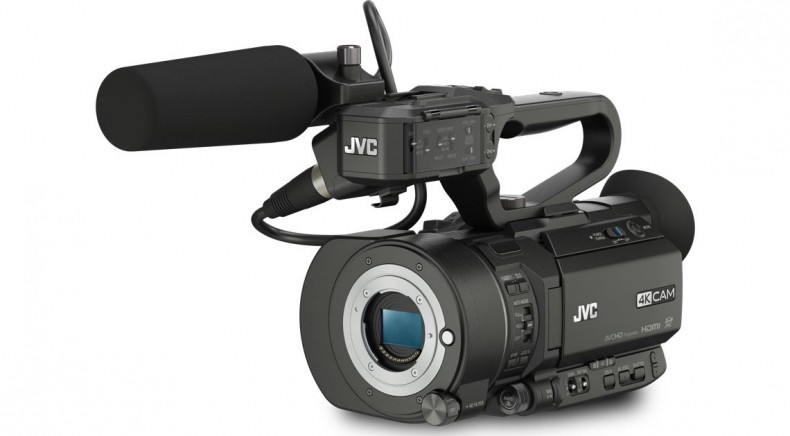 Figure 1: JVC GY-LS300—ships without lens but with shotgun mic.

I’ve spent the last few years working with this new technology. Mostly it’s been interesting and productive. However, these non-traditional cameras are too often an ergonomic disaster. Shooting with them is a true pain. Engineering teams obviously focused on sensor chips and FPGA chips—not on camera design. For example, to save cost, menus control most every camera function.

When shooting for paying customers it makes economic sense to shoot with a traditional compressed codec rather than one of the flavors of RAW. It simply takes too much time and labor to “grade” digital monochrome digital data into color images that comprise but one of hundreds of clips to be used in an edit.

The GY-LS300 makes these investment dilemmas disappear. The LS300 is a lightweight (3.75-pounds with battery), compact camcorder that can be handheld or mounted on a shoulder baseplate such as the one from Zacuto shown in Figure 2. 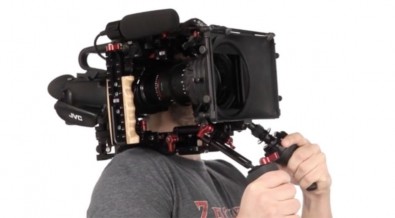 One controls the LS300 by toggle switches, buttons, and dials as shown in Figure 3. A joystick provides access to a straightforward menu system. Using a menu, important shooting functions are assigned to ten User buttons. Everything about the GY-LS300 is “industry standard.”

Figure 3: Over a dozen switches and buttons make operational changes fast and easy

Also industry standard—a full set of image control functions that enable you to match cameras and/or create a “look.” See my article where I discuss controlling knee, gamma, and a camera’s color matrix.

The GY-LS300 provides industry standard audio capabilities: dual XLR jacks, audio routing switches, the ability to select different levels of audio attenuation (don’t look for this function on a DSLR), and manual level controls. (Figure 4.) These capabilities come via a removable handle that also provides a mount for the included JVC shotgun microphone.

The LS300 has several powerful “web” tools. While shooting a second SD card can record proxy video to be uploaded to a news bureau. (The FALCONBRID II chip can encode two streams at the same time.) The camera itself can be controlled by IOS or Android apps. I’ve used both functions on a JVC GY-650 and they work well. The LS300 adds a capability I once used in Asia with a smartphone—stream live to Ustream. The LS300 can stream 1280x720 and 1920x1080 to Ustream and YouTube at 8Mbps and 12Mbps, respectively.

An MFT mount allows, via adaptors, almost every kind of old or new lens to be used with an LS300. These include very old (fully manual), old (servo aperture), and new DSLR lenses, as well as PL-mount lenses. (Figure 7.)

It’s important to remember that when we talk about, for example, a Super 35 lens we are not concerned about whether it has an integral MFT mount or is mounted to the camera by an adaptor. All that’s of concern is the size of the image circle projected on a sensor.

The LS300 sensor comes from AltaSens, a sister company of JVC. The CMOS sensor has a gross resolution of 4512x3008-pixels (13.57 megapixels) with a 3:2 aspect ratio. AltaSens specifies the sensor’s diagonal to be 28.20mm.

A 16:9 variable sized window supports video capture. At its maximum size the window’s resolution is 4464x2511-pixels. This 11.21 megapixel window supports frame rates up to 60fps. (The LS300 captures UHD at up to 29.97fps.) AltaSens specifies the window to have a diagonal of 26.72mm. (Figure 8.) At its maximum size, the capture window closely matches the 3-perf Super 35 film format. (Figure 9.)

Unlike other cameras, the GY-LS300 adjusts its sensor’s capture window to match the size of the image projected on the sensor by different types of lenses. No matter the capture window’s resolution, its pixels are mapped—which likely means down-scaled or up-scaled—to the recording resolution. (Figure 10.)

As you change the VSM setting, the capture window size is adjusted thereby creating a small set of “virtual” sensors. (Figure 11.) As you toggle through VSM settings you’ll encounter three information types.

What may not be obvious is that as the capture window becomes smaller it includes fewer photosites thus decreasing capture resolution. The decrease in resolution as VSM is dialed down is measurable (www.slashcam.de/artikel/Test/JVC-GY-LS300---verkanntes-Multitalent-.html). When VSM is set to 86%(4K) the capture window’s diagonal is 23mm (86-percent of 26.72) and has a resolution of 3840x2160-pixels. (Figure 12.) At settings below 86% captured resolution is less than 3840x2160 which, with the camera set to record UHD, requires capture window contents to be upscaled to UHD.

Lens Type—The LS300 supports three types of lenses: Super 35, MFT, and Super 16. After mounting a Super 35, MFT, or Super 16 lens, you can set VSM to match your lens. However, there is an alternative way to set VSM—use the LS300’s VSM setup tool to guide you to a VSM setting. (Figure 13.)

Figure 13: LS300’s VSM setup tool can guide you to a lens setting

After attaching an Olympus M.ZUIKO Digital ED 14-42 F3.5-5.6 MFT zoom lens supplied by JVC, I toggled through the VSM settings. With a VSM setting of 89%, I saw no vignetting. Others have also reported no vignetting at 89%, and even higher. JVC, however, warns against setting VSM higher than 80%. (Figure 14.)

Figure 14: In what way does the lens “not perform optimally”?

It may seem odd this setting dilemma occurs when an MFT lens is used on a camera with an MFT mount. The oddity becomes less so once one realizes there is no issue with MFT lenses when one is shooting SD, HD, or C2K. The oddity disappears when one understands that for those who shoot C4K and UHD, the MFT mount is simply a way of attaching a lens which more completely fills the Super 35 sensor.

APS-C—When shooting 16:9 video with an APS-C lens, the lens projects a 22.2 x 12.5mm image on a sensor with a 25.5mm diagonal. At the 97% VSM setting, the LS300’s sensor’s capture window has a diagonal of 26mm and a capture window resolution of over 10Megapixels. You should consider shooting with APS-C lenses to obtain maximum UHD quality. By using an EF-to-MFT adaptor, Figure 15, Canon EF lenses can be used by an LS300. 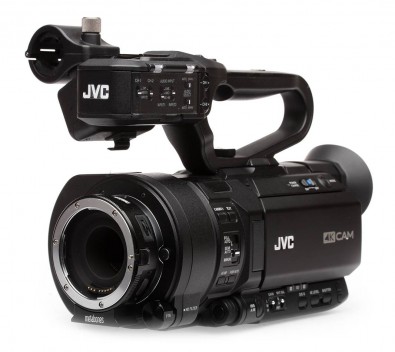 Full Frame—VSM is designed to work with lenses that project an image equal to, or smaller, than that projected by a lens designed for Super 35 cameras. Therefore, if you mount a 35mm Full Frame lens on an LS300, cropping will result. (Figure 16.) The focal length of the lens will appear to be 1.5X longer—a crop factor of 1.5. A 50mm FF lens will have an angle-of-view equal to a 75mm lens.

To avoid cropping, attach the lens using a focal-length reducer such as a Metabones adaptor. (Figure 17.) It will reduce the focal length by a factor of 0.71 that will result in the lens acting as though it had a 53mm focal length. As a bonus your lens will gain a stop of sensitivity. Figure 18 shows my Nikon F1.8 lens at work in Vegas. 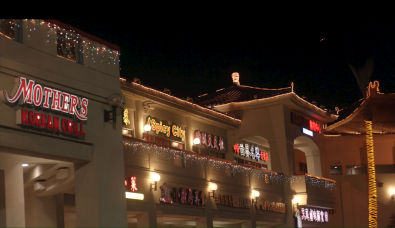 Digital Cinema Production—Media shot for productions that will be digitally projected in a theater are shot at either 2K (2048x1080) or 4K (4096x2160), which JVC calls C2K and C4K. The GY-LS300 supports both cinema resolutions. And, unlike when shooting other formats, C2K and C4K can be shot at 24.0fps.

When shooting C4K you’ll want to use glass designed for Super 35 cameras. (Figure 19.)

HD, FHD, and SD—When shooting SD, HD, or HD+WEB video, the AltaSens chip has the ability to support 2x1 on-chip binning. Binning enables sensor read-out in half the time thereby enabling 120fps. JVC will support 120fps in an April firmware release. When recording HD (1920x1080), FHD (1280x720), or SD (720x480) the capture window is scaled appropriately. Even when VSM is set to the minimum 43% ratio, capture resolution is adequate for HD video.

When you select a recording resolution, attach a lens, and set VSM, a single mapping function is computed. What would happen, with a prime lens attached and the recording window size fixed, were the VSM ratio decreased over time? At a large ratio, the full image falling on a sensor is captured. As the ratio becomes smaller, the capture window size becomes smaller thus capturing smaller portions of the image.

When you can enable the LS300 Virtual Zoom function, the zoom rocker on the camera’s grip can be used to drive the VSM ratio either larger or smaller. In this way, a prime lens can be used as a zoom lens. The zoom range is approximately 2.3X for HD and 1.2X for UHD. (Figure 21.)

The second part of this two-part report will focus on digital cinema production using the GY-LS300’s J-log gamma.