The new Shure microphones have a new “toriod” polar pattern, along with steerable coverage that allows accurate control of audio capture in any location of a room.

“Microflex Advance is unique because it combines the deep roots of expertise Shure has demonstrated in both the acoustic and digital signal processing domains,” said Rob Klegon, associate manager of global products at Shure. 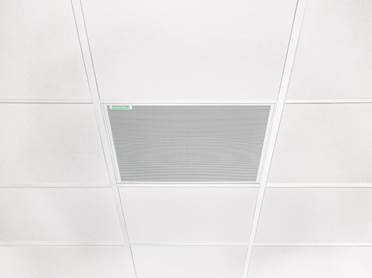 The Microflex Advance Ceiling Array is a premium networked array microphone that captures best-in-class audio from above spaces, enabling up to eight lobes that are configurable in three dimensions. The array can also be installed below the ceiling with standard VESA-D and wire hanging mounts.

Within the onboard IntelliMix DSP Suite, Shure’s proprietary Steerable Coverage technology deploys up to four discrete audio channels around a table and uses a new “toroid” ring-shaped pattern to reject unwanted artifacts in the space. Programmable capacitive-touch mute switches ensure simple user operation with the ability to customize LED color and shape to indicate microphone status.

Offering easy and efficient analog to digital/digital to analog conversion, the four Shure Audio Network Interfaces provide seamless audio routing in and out of the Dante networked audio domain.

Available in standard XLR (mic/line) and block (mic/line) connector versions that include LED and Mute switch pins for logic-enabled analog microphones. All Audio Network Interfaces include a single Ethernet port for easy Dante Audio routing and a browser-based software for control of connectivity and monitoring.

Shure said the entire Microflex Advance portfolio will be available later this year.