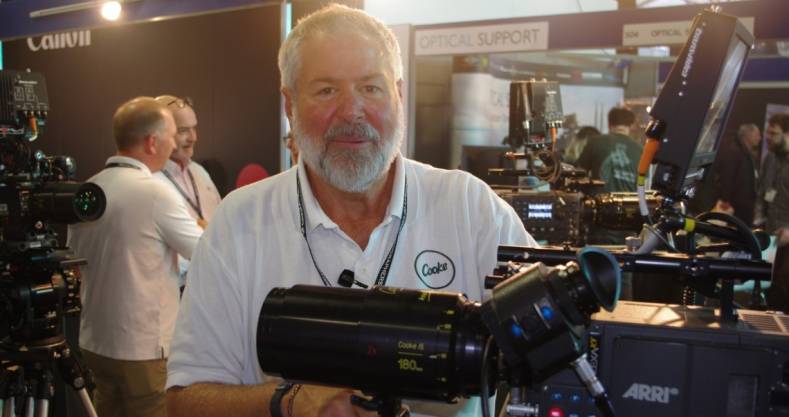 Anamorphic is the big trend in lenses right now and Cooke Optics debuted the latest in its expanding range based on the format at the BSC (British Society of Cinematographers) expo on 29 and 30 January. The 180 Anamorphic/i lens joins the existing models in the range and paves the way for further launches this year, including a 300mm and two zooms.

The launch of the Cooke Optics Anamorphic 180 was one of the highlights of the 2016 BSC show, which was held for the first time in an exhibition/event venue, the Battersea Evolution in London's Battersea Park, rather than at a film studio. Cooke's range of Anamorphic/i Prime lens was established with 32mm, 40mm, 50mm, 75mm and 100mm models and further extended last year through the addition of 25, 135 and then 65 Macro opticals.

Company chairman Les Zellan commented that the nature of anamorphic shooting called for a full set of lenses, so the aim was to complete the line-up as quickly as possible. He acknowledged that lens development and production took time, with Cooke having a reputation for not being the fastest of producers. "Opposed to some of our solutions in the past we've been moving at warp speed," he said. "I hope we can keep some of that momentum up with other products."

In that spirit the 180 will be followed by the 300mm model, set for delivery in March. This will complete the prime range of anamorphic, after which Cooke will produce two zooms, the first of which, a 35-140mm, is scheduled for the end of April. A second, longer zoom should be ready by the end of the year.

Zellan explained the 180 had been introduced because of the importance of long lenses in anamorphic shooting. "The 25 has met with success but as a system people need it to go from there up to 300mm," he said. "The next step is the zooms. The Primes are already being used for commercials and in studios but as the set matures we want it to extend to the whole of a film."

Cooke had been working with Angénieux using its anamorphic zoom technology but Zellan explains that the aim was to have a match with the Prime lenses so the French company's use of Anamorphic element at the rear of the optic called for a different approach. "We wanted a front anamorphic," he says, "and our lenses will be a true type of that format. The longer zoom in particular will be unique because there is nothing out there like it." 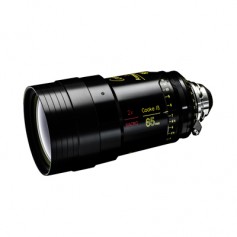 Anamorphic lenses, invented during the First World War by Henri Chrétien for military use, were first used for cinema in 1928 on the silent short Construire un Feu, directed by Claude Autant-Lara. The format came into its own during the 1950s with the boom in widescreen production, personified by CinemaScope and the systems that followed its lead, including Panascope, CinemaScope and Warnerscope. Anamorphic shooting had a resurgence in the 1980s and as Zellan observes, never really went away, although it was expensive and relatively difficult to work with.

The technique has become more popular since the introduction of digital cameras, with many more filmmakers and producers wanting to use it. "It is a beautiful format," Zellen commented, "but the real reason we are seeing so much anamorphic is that the market went from $100 million movies to films being shot on the RED camera and other digital systems. Digital is a boring medium and not dynamic. So to give it personality directors of photography started using anamorphic lenses. Sensors with higher and higher resolution have created a market for old lenses, some of which hadn't been used for 60 years. Anamorphics have the odd distortion and some funkiness but they take away the sterility of digital."

Zellan added that when he first took over Cooke Optics 20 years ago, people asked when he would produce a set of anamorphic lenses. "The market for them was relatively small back then," he said, "and it would have cost us a lot to produce them, with fewer rental houses [than today] as outlets. It would have been expensive to do."

The expanded marketplace for anamorphic lenses includes television, where widescreen is now firmly established. "The 16:9 format is not quite the right ratio for widescreen so it does need a little letterboxing," Zellan said. "But it is being used and commercials and episodic series are shot anamorphic, which gives the ability to scale the picture."

Zellan concluded that the growing appetite for anamorphic is "quite exciting", with parallel demand for his company's other lens ranges. Cooke Optics will follow up the launch of the Anamorphic 180 by showing it, and it other products, on the EMIT stand at Micro Salon 2016 from 5-6 February.