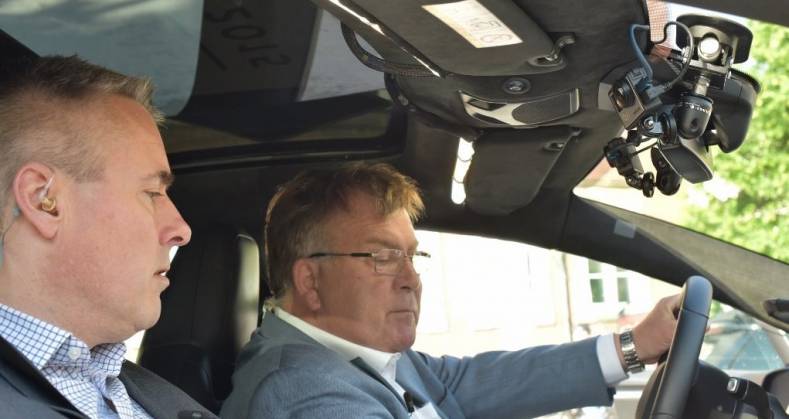 Getting politicians to open up in television interviews and say something beyond what their advisers and spin doctors have told them to say is not easy in today’s media climate. Working on the premise that two people in a car will talk to each other and be more unguarded in what they say due to the intimacy, Danish commercial broadcaster TV2 has developed a new style of political talk show. Technology plays a major part in this, with DPA-Wisycom wireless microphones, Blackmagic Design processing and switching technology, Go Pro cameras and other high-tech equipment installed in a Tesla electric car.

This novel concept was pioneered during coverage of the 2015 general election in Denmark and has become part of TV2's current affairs presentation on its 24-hour rolling news service. By using a Tesla Model S as a mobile studio the broadcaster is ensuring minimum background noise in the vehicle due to the electric transmission. The car serves as a self-contained debating forum for two politicians from opposing parties to discuss major issues. Technical equipment in the Tesla and the links technology is controlled remotely by engineers at TV2's broadcast centre in Copenhagen.

"We introduced the Tesla mobile studio during last year's election coverage because we wanted to present political candidates in a different environment," explains Morten Brandstrup, head of news technology at TV2. "Initially it was used for the programme Udfordringen (The Challenge) which ran every day during the three weeks prior to the election. On each day we paired politicians of different political persuasions and had them talk to each other live to air while they drove the Tesla around the country. They knew that every word they said could be heard but being in a car rather than a studio made their conversations much freer and more unexpected."

The participants wear DPA 4080 super-cardioid lavalier microphones, which are discrete and suitable for on-camera use and clearly pick up what is being said. Four 4080s are used in the Tesla and operate in conjunction with four WisyCom TX MPT40S wideband body pack transmitters and four WisyCom RX MPR30-ENG true diversity receivers. The participants in the car are able to hear feeds from the main studio through interruptible foldback earpieces. 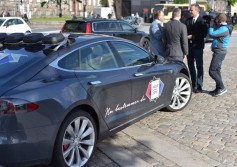 Politicians are interviewed before getting into the Tesla mobile studio.

Brandstrup comments that acoustic tests were carried out in collaboration with DPA consultant Eddy B Brixen, who owns EBB-consult as well as working with the microphone manufacturer on R&D projects. "The Tesla turned out to be a great environment for recording voices," Brandstrup says. "Thanks to the directional quality of the microphones the audio was perfect, which was really important because Udfordringen is a talk show and we wanted audiences to hear the politicians clearly without the distraction of background noises."

Pictures of the debate are provided by six cameras mounted in and around the car. At present these are GoPro 4 Black models but Jens Christoffersen, whose JayCam company integrated the system, says any make could be used. The cameras are connected to a Blackmagic Design ATEM Television Studio 1U multi-camera switcher housed in a Peli case in the boot of the car. Christoffersen explains that the unit can be either HDMI or SDI, with four of the GoPros fitted with C-mount for optic connection; four BMD mini-converters are used for switching from SDI to HDMI.

Outputs from the ATEM TV Studio feed into a Skaarhoj C30 video switcher, which is the host server for remote operation of the Blackmagic equipment. Other gear contained in the Peli Case includes a BMD dual seven-inch rack monitor and audio embedder, two Sonifex Redbox audio sum units, a Resident Audio T4 Thunderbolt four-channel audio card, one Netgear switch and a Luminex Ethernet-DMX2 MkII node. The boot also contains a Mac Book Pro, which is loaded with Waves audio software. Christoffersen adds that this contains a Dan Dugan Sound plug-in for auto-mixing of the microphone inputs.

The driving compartment of the Tesla is illuminated by 12 BB&S Reporter light-pipe mini remote phosphor LED lighting units. "We've got some cold and some warm lamps, which are colour mixed from the gallery," says Christoffersen. The mobile studio is connected to the broadcast centre over four AVIWEST DMNG PRO180 3G/4G uplinks, using four AVIWEST Quad antennas. As a backup a Panasonic AG-HPG20 P2 HD is used to record video locally.

Christoffersen explains that the link carries both video signals and remote data. Brandstrup adds, "Our aim was to show how much we could do with an IP and 4G connection. Using the Tesla as part of our coverage allowed us to push technology in a new direction."