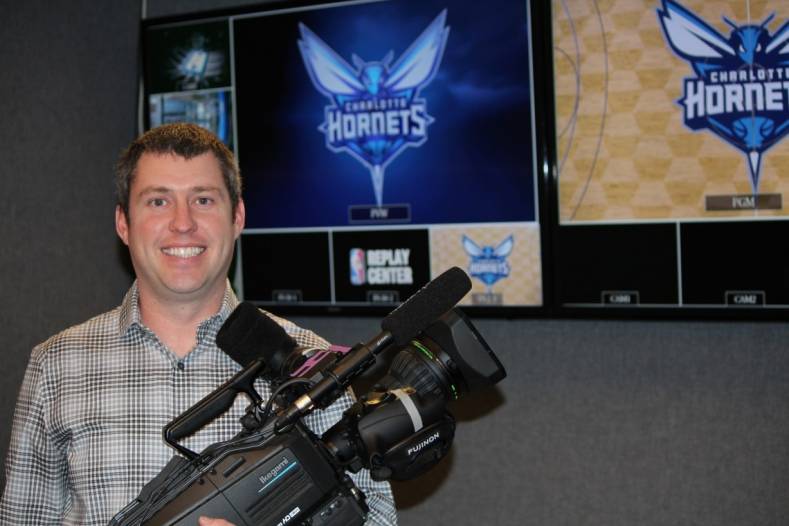 Kelly Heddleson, Director of Technical Operations for the Charlotte Hornets, with one of their new Ikegami HD cameras.

The new Ikegami HDK-95C cameras are the successors to the Ikegami HL-60W, which the team had been using since the Hornets’ home arena opened in 2005.

“Our upgrades are few and far between, so we’re looking for equipment with proven reliability and performance which stands up over a long period of time,” says Kelly Heddleson, Director of Technical Operations for the Charlotte Hornets. “Ikegami is known for having the prettiest picture, and we wanted to make sure that we could display a great image to our large video boards. In addition, this was a city project – we wanted the highest quality possible while still being budget-friendly.”

In addition to hosting at least 41 games a year for the Hornets, Time Warner Cable Arena is also the venue for approximately 60 additional productions each year. Heddleson and his team are in charge of producing broadcast-quality video for a heavy schedule that includes NCAA basketball, monster truck events, circuses, the 2017 NBA All Star Game, and much more. All video that comes from the Ikegami HDK-95C cameras is distributed to the arena’s giant LED screens and in-house TV’s.

“It’s important for us to provide our viewers with the best quality possible,” said Heddleson. “We chose the Ikegami HDK-95C because we’re looking for deep blacks and vibrant colors. Another advantage of these cameras is that they give us multi-format out of the base station – our studio is 1080i native, but we can also take the HDK-95C’s dual-link 2X high-speed signal to our EVS replay machine. That allows us to replay from 120 frames, for a nice smooth replay. Finally, we have a ready upgrade path to 4K when we change our arena TVs over to that format.”

The advanced features and extensive controls for the Ikegami HDK-95C have also made the new cameras a hit with Heddleson’s crew.

“The HDK-95C has focus assist, which the younger camera operators especially appreciate—it helps them grab focus faster when the players are running down the court,” he said. “On the video shading side, we have Ikegami’s OCP-300 operation control panels which gives us every bit of control that we need. There’s not one thing on the camera that we can’t adjust. We also use an Ikegami 24” monitor which is just awesome—all together, it’s a great area for shading.”

Anthony James Partners was the consultant on the project, and Comprehensive Technical Group LLC, of Atlanta, Georgia served as the system integrator.