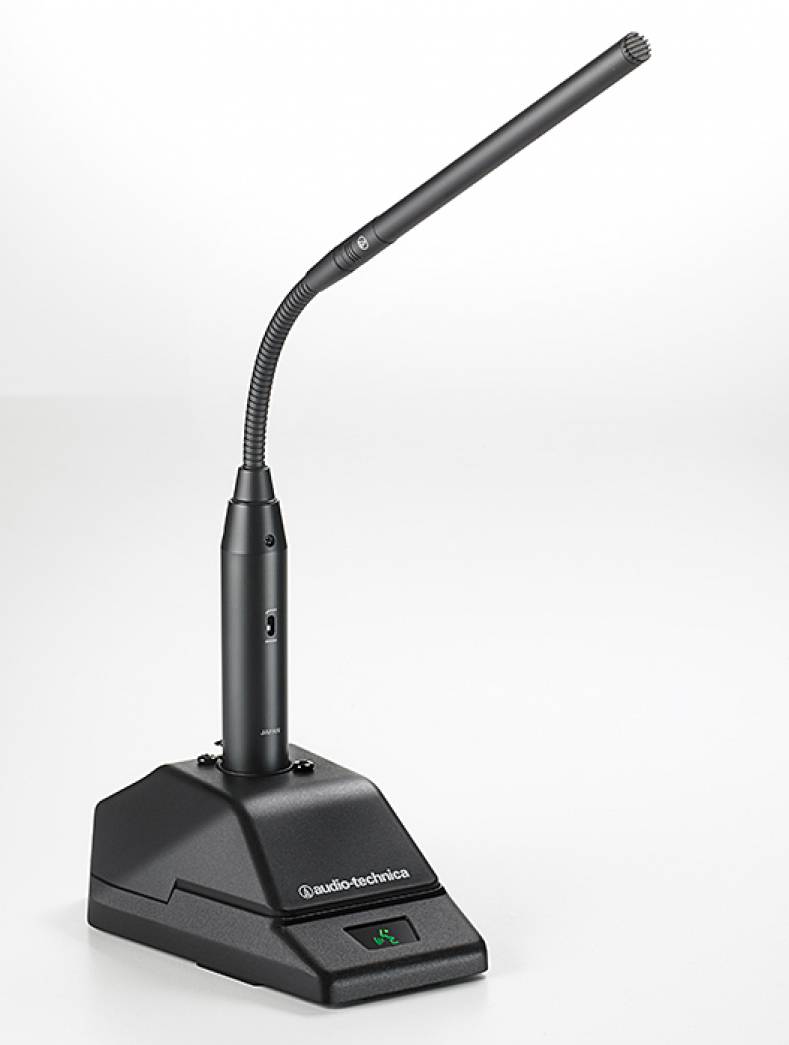 System 10, a technology alternative designed to by-pass the uncertainly of standard UHF channels during the FCC’s spectrum auctions, uses 2.4 GHz instead. Though not as robust or expandable as UHF, 2.4 GHz works well in smaller installations where fewer channels are required. Several major wireless microphone manufacturers have introduced 2.4 GHz systems, which are completely free from TV interference.

Designed to work with phantom-powered, condenser gooseneck microphones with a three-pin XLRM-type output, the ATW-T1007 System 10 Microphone Desk Stand Transmitter features a touch-sensitive user switch that can toggle between talk and mute modes, or function as a press-to-talk or press-to-mute button. Two red/green LEDs – one visible from the front of the unit, the other from the rear – indicate toggle/talk/mute mode, battery level and charging status.

The ATW-T1007 offers three levels of input gain (-6 dB, 0 dB and +6 dB), which can be selected via a switch on the bottom of the unit. Another switch engages the low-cut filter. 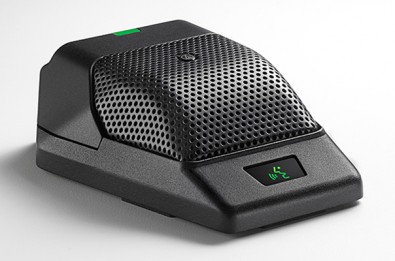 Designed for conference rooms and other meeting spaces, the ATW-T1006 System 10 Boundary Microphone/Transmitter also pairs with any System 10 PRO or System 10 digital wireless receiver. It includes a cardioid condenser boundary mic equipped with a touch-sensitive user switch that can toggle between talk and mute modes, or function as a press-to-talk or press-to-mute button.

Two red/green LEDs – one visible from the front of the unit, the other from the rear – indicate toggle/talk/mute mode, battery level, and charging status. The mic also offers three levels of input gain (-6 dB, 0 dB and +6 dB) and the low-cut filter switch.

For both units, a 3.7V rechargeable lithium-ion battery provides nine hours of use on a full charge and is easily recharged with the included USB charging cable. The ATW-T1007 ($489) and ATW-T1006 ($559) will be available in the spring. 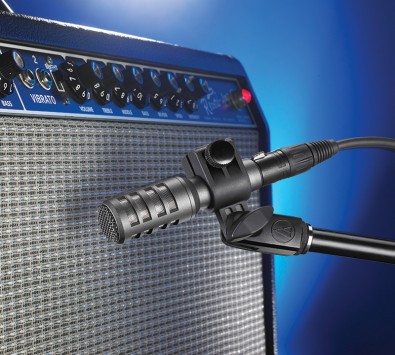 With its rugged, brass metal construction, low-profile design and the ability to handle high SPLs, the AE2300 can maintain directionality across the entire frequency range, with little off-axis coloration (frequency response is nearly identical at 0°, 90° and 180°) for excellent phase cohesion in multiple-mic setups. The microphone is also equipped with a switchable low-pass filter that cuts out harsh, high-frequency noise, such as hiss. It will be available in February for $269.

The ATM230 is a new percussion mic for the Artist Series line. The mic’s proprietary capsule is designed to excel in high SPL applications, delivering full, well-rounded audio with an exceptional low-end. The hypercardioid polar pattern reduces pickup of sounds from the sides and rear, improving isolation of desired sound source. It will be available in March for $139.