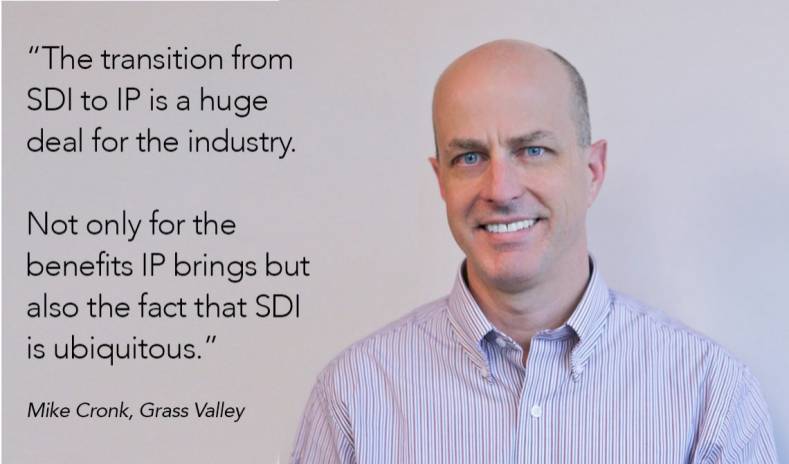 The migration from SDI to all-IP is a hot topic. Mike Cronk of Grass Valley, one of the founding members of the Alliance for IP Media Solutions (AIMS) talked to the Broadcast Bridge about AIMS, standards, and some advantages and pitfalls to avoid in the transition to an IP world.

Mike Cronk, SVP strategic marketing at Grass Valley, is leading the Alliance for IP Media Solutions (AIMS) initiative for Grass Valley and is also chairman of the AIMS board.

Cronk shared his views on AIMS and all-IP broadcast operations with The Broadcast Bridge. The alliance was founded to facilitate the migration from SDI interconnections in the media industry to IP, already universally adopted across the telecommunications and IT sectors.

SDI has served the broadcast industry since the early days of digital interconnects. Allow digital video started out for a brief period with parallel interconnects, the unwieldy D-25 connectors and multi-pair cables where soon replaced with the BNC and coax, as with analog systems before. SDI standards were extended from the 243 & 270 Mb/s of the standard definition component standards to 1.5 then 3 Gb/s to handle HD. It has even been stretched to 12 Gb/s with SMPTE 2082 to handle 4K signals. However new formats like uncompressed 4K require higher data rates. 12-bit 4:4:4 2160p60 video needs around 24 Gb/s. There is talk of 24Gb/s (ST2083), plus SDI can also be transmitted over optical fiber so there is life in the format yet.

Many systems, from trucks to playout need flexibility to run different formats over the same interconnection, say HD or 4K. There is an alternative to SDI and that is IP. Universally adopted across the IT industry a family of standards that already support IP at data rates of 25, 40 and 100Gb/s in commodity routing and switching products.

The move to IP replaces a ubiquitous interface (SDI) with something new.” said Cronk, “If we lose that ubiquity we are taking a step back. We want to avoid all the headaches we had with interoperability between file formats.” The acceptance of MXF took half a decade to arrive at satisfactory interoperability, thanks in part to the sterling work of the AMWA.

“The industry really needs to settle on one step of standards. We are not developing new standards but using standards and recommendations that the industry has already put forward.” These include TR04 from the Video Services Forum (VSF), which uses SMPTE 2022/6 for video (SDI over IP) and AES67 for audio. VSF TR03 uses IETF RFC 4175 real-time protocol (RTP) to carry uncompressed elementary streams over IP.

The Alliance for IP Media Solutions (AIMS) is fostering the adoption of industry standards for the broadcast and media industry as it transitions from SDI to IP.

AIMS will complement the work already done by the VSF. According to Cronk “We see two areas were we can add. One thing missing from the work of the SMPTE and EBU is the marketing of standards. We believe we need a stronger voice promoting the standards from SMPTE and VSF. AIMS will have active demos at trade shows like NAB.”

“The other area we can complement VSF is that we have formed a technical working group looking into reference designs and interoperability.”

The other IP, intellectual property can sometime be an impediment to the adoption of open standards. Cronk explained how the AIMS bylaws allow members to contribute ideas to the associations to be shared free-of-charge by members and to be licensed to third parties. In areas of technology that are yet to be resolved there is a forum where AIMS members can share ideas, which can then be taken to VSF”

Grass Valley and the Glass to Glass IP strategy

Grass Valley believes a system must be true IP end-to-end to see the advantage. “It’s no good tying SDI conversion equipment around a core IP router.” said Cronk. “The ability to do multi-format productions over the same infrastructure is just one advantage of IP.” For the broadcaster, being able to use commercial off the shelf (COTS) switching and interconnects should also mean cost-savings.

The IT industry has seen huge gains from adopted the all-IP architecture. The modern data center provides scalability, inherent load balancing and fault tolerance through virtualization of processing resources. Commodity processing hardware and switching is cost-effective, and essential features like backup and redundancy are simple to architect. These features are all attractive to broadcasters, but the needs are different. Video systems must support real-time operation, deterministic switching, and low latency. The processing requirements for video can be challenging for CPU blades. GPU acceleration or custom, optimized, programmable gate arrays (FPGA) can be more cost-effective for many applications.

Current COTS Ethernet systems are 10, 40 and 100 Gb/s, with 25 Gb/s rapidly emerging as a cost-effective alternative to 40Gb/s. In the meantime, 10Gb/s is insufficient for uncompressed 4K, so mezzanine codecs are very much in vogue as a solution.

Grass Valley is part of the TICO Alliance, promoting a lightweight low latency codec that is visually lossless as 4:1 compression. TICO will allow three streams of 4K over 10 GbE. ”It’s working its way through SMPTE,” said Cronk, “TICO is lower latency than J2K—measured in lines and the multi-generation quality is good. The gate count is much lower than J2K, making the application more affordable.”

Cronk continued, “10 Gb/s infrastructure will evolve to 25Gb/s and then uncompressed 4K becomes viable. ” With an IP infrastructure “to move from 10 to 25, just means changing an I/O module”.

When will we see all IP systems?

Cronk said “we will see IP in mobile production and playout applications in 2016. There were some early truck IP systems but that was solely for IP multi-viewers.” All-IP will bring other advantages like the ability to virtualize processing resources and use HD or 4K over same cable infrastructure

Summing Up Cronk opined ” There is a desire across the industry for one set of standards. AIMS builds on the hard work of SMPTE and VSF to that end.”

The move from SDI to IP is going to be one of the most revolutionary steps in video systems since the change from analog to digital. The path from videotape to file-based media was not without pain, and organizations like AIMS can hopefully ensure a smoother transition for this next big step.