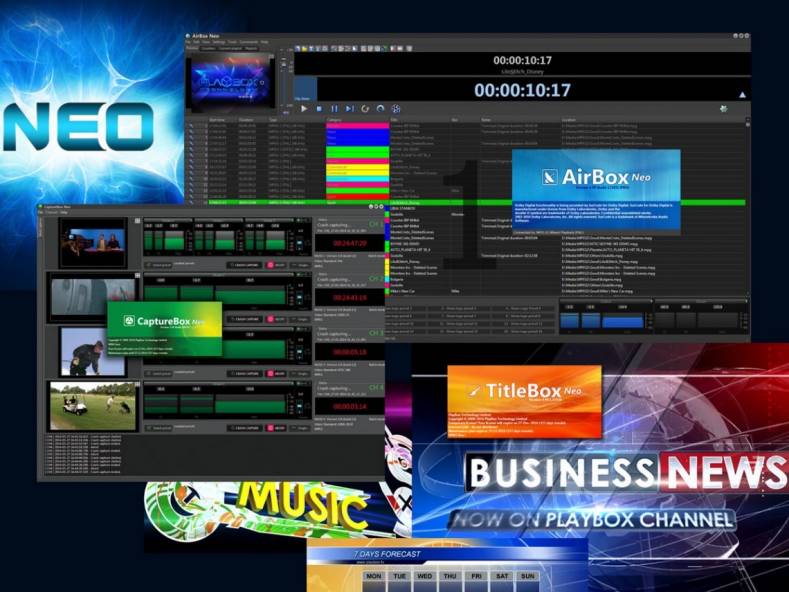 PlayBox Technology has introduced updated versions of its playout and channel branding products, including the AirBox Neo, TitleBox Neo, CaptureBox Neo and SafeBox Neo. Among the upgraded features are compatibility with Ultra High Definition (UHD) and a new user interface.

The Neo version of each product is described by PlayBox Technology president Don Ash as "an evolutionary upgrade" designed to make the company's distribution platform and associated products ready for UHD operations and what might come afterwards. "It confirms our commitment to delivering the most efficient and future-proof playout and branding solutions," he says.

There is also support for products from other manufacturers, including Ross NK Series routers and the Horita TR-100 timecode reader. The AirBox Neo also now enables timecode to be used in conjunction with MOV (QuickTime Movie) files, while ad insertion for multiple channels can be handled by DeckLink cards. Operationally the clip trimmer and audio level controller have been enhanced. Overall the system is intended for automated running 24 hours a day, seven days a week but can also be operated by technicians, with capacity for putting programmes into live transmissions.

The TitleBox Neo on-air graphics and character generator has been upgraded to handle a variety of interactive graphical functions, as well as titling. These can be controlled live and include improved handling of UHD in addition to HD and SD. There is also a new API plug-in developed by PlayBox partners that enables more straightforward connection to products made by other companies.

PlayBox's multichannel ingest server, CaptureBox Neo, is able to take up to four SD or HD video inputs at the same time, with monitoring on one display and control by an interface with multi-channel capability. The SafeBox Neo content and playlist replicator has a new graphic interface and faster processing, plus updated workflow routines that prevent the over-writing of material.

Ben Gunkel, chief commercial officer at PlayBox Technology, explains that users with valid Annual Software Maintenance and Technical Support are able to upgrade current products to Neo versions with a download: "If they contact us we will be able to analyse their system and advise relevant upgrade options."